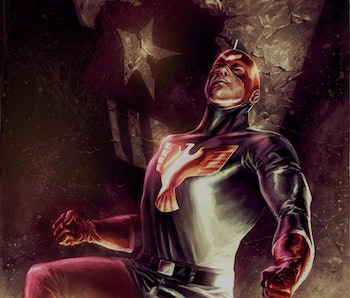 It’s official — Jeffrey Mace, aka the Patriot, is the new director of S.H.I.E.L.D. — but what we don’t know is what he’s hiding. He hasn’t suited up yet, but the real mystery here isn’t in his fashion choices — it’s the secret he’s keeping from former director Phil Coulson.

The showrunners of Marvel’s Agents of S.H.I.E.L.D. have said Jeffrey (Jason O’Mara), Phil Coulson’s replacement as director of S.H.I.E.L.D., is indeed Jeffrey Mace, who in comics was the third person to inherit the Captain America mantle while Steve Rogers was asleep in suspended animation. “We are excited to have the Patriot joining our show, a character who has existed in Marvel Comics for 70 years,” said executive producers Jed Whedon and Maurissa Tancharoen, who put their own spin on the character by making Jeffrey an Inhuman with superpowers.

But what is Jeffrey keeping secret from Coulson? His debut appearance last week was fraught with deception, and Jeffrey is unwilling to disclose his plans for Daisy — now an Inhuman vigilante — and Melinda May, who is out of commission by way of a ghastly spirit. For a guy who made a big stink about trust and openness, that he’s got “classified” anything is suspicious.

It’s possible that he’s actually another Inhuman in disguise. It wouldn’t be the first time in Agents of S.H.I.E.L.D. history someone wasn’t who they said they were (cough, Ward and Lash).