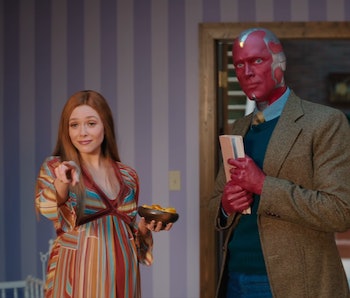 The Marvel Cinematic Universe just got two new heroes. Even though they're babies now, they could grow up to become (Young) Avengers. Or maybe not. Who knows how WandaVision will end?

Until then, the third episode of WandaVision revealed to us two new characters, Tommy and Billy, who have quite a long comic book history. But who are Tommy and Billy? And what could they mean for the future of the MCU? (If they survive WandaVision and see the future, that is.)

Warning: Spoilers for WandaVision Episode 3 ahead.

In Episode 3 of WandaVision, Wanda (Elizabeth Olsen) comically conceives and gives birth to twin boys, Tommy and Billy. The episode ends before the boys could grow up even more, so for now, they're just babies. But in the comics, Tommy and Billy grow up into something more.

Who are Tommy and Billy in Marvel?

Buckle up, this going to get complicated.

Tommy and Billy were born Tommy Shepherd and Billy Kaplan. They were born into different families by different parents. They met each other in the Marvel Comics series Young Avengers, which you can deduce is about sidekicks and teenage superheroes who operate on their own.

Tommy, who went by the name "Speed" had the power of super speed (duh) while Billy (aka, "Wiccan") had psychic and magical abilities like flight, astral projection, force field generation, and more. You might notice that their powers mirror Wanda and her brother Pietro/Quicksilver. Well, there's a reason for that. And no, it's not gross.

In the 2005 Marvel crossover House of M, Wanda used her powers to create twin sons — at the cost of the Marvel Universe as everyone knew it. To create her children, Wanda selfishly rewrote reality, which had many lasting effects that played out throughout the eight-issue series.

Long story short, Wanda's imagination — coupled with fragments of the demon Mephisto — allowed the souls of her House of M children, "Thomas" and "William," to become reincarnated into Tommy Shepherd and Billy Kaplan. So while Wiccan and Speed aren't brothers by blood, they are brothers by soul. Welcome to comic books! (That's about the most succinct way to explain their story, which is way more complicated.)

That's who Tommy and Billy are in comics. It's unknown what the two will ultimately become in WandaVision, which only loosely adapts the stories and mythologies of the comics. Due to the nature of WandaVision and its artificial reality, it's possible that the brothers won't make it out alive if Wanda's grip on Westview crumbles. Or perhaps they will. Wanda is, after all, a very powerful Avenger whose full capabilities have yet to be seen.

Is WandaVision setting up Young Avengers?

The timing of the brothers' arrival is interesting, as it ties nicely into what else is currently happening behind the scenes in the MCU.

That's right: There's a whole team being built right now! And WandaVision just may introduce two more in Tommy and Billy, but we'll have to see how WandaVision ends to know for sure.