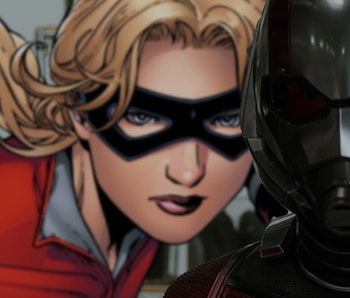 Ant-Man, a former master thief known as Scott Lang (played by Paul Rudd), fights tooth and nail all for his young daughter, Cassie (child actress Abby Ryder Fortson). Cassie was his primary motivation in 2015’s Ant-Man, but in the new sequel Ant-Man and the Wasp, Cassie hints at a heroic future for herself, one that happens in the comics and could occur in the MCU as well.

Minor spoilers for Ant-Man and the Wasp ahead.

In Ant-Man and the Wasp, Scott teams up with Hope van Dyne (Evangeline Lily), who has inherited the mantle of the Wasp. Together, they work to retrieve Hope’s mother Janet (Michelle Pfeiffer) from the quantum realm.

In two different scenes, Cassie talks about “a partner” for her father when he’s the Ant-Man. Scott thinks she’s talking about Hope, but it turns out, Cassie is talking about herself. Later, at the end of the film, Cassie reveals she wants to help people, just like her father.

Typically, when characters in superhero movies say that, it means they want to be a superhero too. And guess what? In 2006’s Young Avengers comic series, Cassie became the superhero Stature and joins the Avengers’ JV squad before making appearances in major Marvel events like Secret Invasion and Dark Reign.

Unfortunately, in the two-year saga Avengers: The Children’s Crusade by Allan Heinberg and Jim Cheung, Stature is killed by none other than Doctor Doom. But because it’s comic books, she’s was resurrected a few years later in 2014’s AXIS, where a benevolent Doom seeks to atone and assists in bringing Cassie back from the dead.

Because of a rumored time travel plot in 2019’s Avengers 4, there’s speculation that an older version Cassie Lang might appear in the film as one of her superhero identities. Last April, an unconfirmed rumor involved actress Emma Fuhrmann being involved in Avengers 4 as “Cassie Lang,” as seen in her IMDB profile. However, it was only ever a rumor, and Fuhmann’s IMDB page is now scrubbed of any Avengers 4 credits.

Will Stature or Stinger appear in future MCU movies? We don’t know. We don’t have the Time Stone.