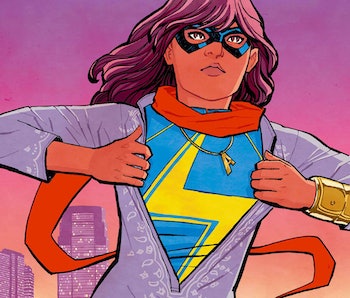 It's hard to believe now, but the Marvel franchise didn't always cast A-listers. In what is now an infamous blog post from 2009, Vulture called Chris Hemsworth and Tom Hiddleston "no-names" when they were announced to star in Thor. It's funny looking back now, but that's exactly what those two were eleven years ago.

Once again, there's a new "no-name" who may soon be the biggest star on the planet.

Reported by Deadline, 18-year-old Canadian actress Iman Vellani will play the popular Kamala Khan/Ms. Marvel in the Disney+ series Ms. Marvel. The series, based on comics by G. Willow Wilson, follows a teenage superfan of the Avengers, Kamala Khan, a Pakistani-Muslim teenager from New Jersey who takes up Carol Danvers' former mantle of Ms. Marvel.

With Ms. Marvel being her onscreen debut, there are "open expectations," if you will, for Vellani. Without any previous work by Vellani to observe, expectations aren't necessarily high, but they are exciting. Reminiscent of Daisy Ridley, another "no-name" before her stardom after Star Wars: The Force Awakens, Vellani has the potential to be another prominent public figure and an important vehicle for representation for young women everywhere.

What does Ms. Marvel reveal about the MCU's future?

Chances are, casting a "no-name" like Vellani guarantees Ms. Marvel is a lock for future seasons and even appearances in movies. While it's unknown what Marvel's plans are for Phases Five, Six, etc., Ms. Marvel will certainly have a prolific future as an MCU staple for years to come.

At D23 2019, Marvel's Kevin Feige revealed that Ms. Marvel will have Kamala debut on the streaming series before leaping to the big screen in yet-to-be revealed movies. "You will meet her in her Disney+ series, and then you will see her in our films," Feige plainly confirmed at D23 in 2019.

While it's unknown at the moment what new Marvel movies Kamala will appear, there have already been leaks and whispers regarding a movie starring the Young Avengers. A teenage super-group of sidekicks, the Young Avengers may include Ms. Marvel and Kate Bishop, sidekick to Hawkeye who will appear in the Hawkeye series on Disney+.

Why Iman Vellani is perfect for Ms. Marvel

Despite a lack of work to watch Imani Vellani, and thereby get a sense of what she'll bring to Ms. Marvel, there is one thing that already proves Vellani is the perfect choice to play Kamala Khan: Her movie reviews.

As sleuths have found, Vellani has an allegedly active Letterboxd account where she may or may not provide some of the funniest, sharpest reviews of movies, at less than 20 words on average. While it's unconfirmed if the account actually belongs to Vellani, it does share a voice that feels so much like Kamala's, a manic teenager who spends too much time on the internet.

As an example: In 2019, Vellani watched Captain Marvel starring Brie Larson. Vellani only gave the movie two stars. "These stars are not for Brie Larson," Vellani wrote, "I will sacrifice my own life…for Brie Larson."

Her three-star Tenet review: "ok ok now explain it like I’m a child."

Her one-and-a-half star review of To All the Boys: P.S. I Still Love You: "Who are these writers? I just wanna talk."

Her four-and-a-half star review of Little Women: "I want Laura dern to hug me." (Same.)

And, proving Vellani has Marvel fan cred, she reviewed 2007's Fantastic Four: Rise of the Silver Surfer with only: "Don’t be shy, show galactus."

Vellani just might get her wish if and when the Fantastic Four finally show up in the MCU.

Ms. Marvel does not yet have a release date on Disney+.