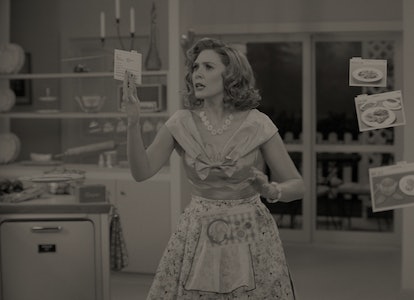 Jimmy Kimmel must lurk on Marvel fan theory subreddits, at least based on his newest interview with WandaVision star Elizabeth Olsen. He's one of us!

But more than that, Kimmel actually grilled Olsen about a popular fan theory, which only confirms that the already-trippy Marvel Cinematic Universe series is hiding more than it seems.

What Happened? — On January 5, Marvel star Elizabeth Olsen appeared as a virtual guest on Jimmy Kimmel Live. Calling in from London, Olsen was there to promote the upcoming WandaVision, the first live-action Marvel series to premiere on January 15.

During the interview, Kimmel questioned Olsen about a few popular fan theories. One of the biggest and most revealing Kimmel talked to Olsen about was a French wine bottle. In the trailers for WandaVision, a wine bottle is seen with the label "Maison du Mépris," or "House of Misery."

Well, it just so happens that one of the most important Wanda comics in Marvel history is the 2005 event series House of M by Brian Michael Bendis.

"This wine bottle," Kimmel said, flashing the wine bottle onscreen. "It says Maison du Mépris. It translates to, 'House of Misery.'" (Rather tellingly, Olsen audibly chuckles when Kimmel says this.) "Which could be saying that the series is based on the popular comic House of M, in which Wanda has a breakdown."

Olsen, who is very good at dodging questions as Wanda is good at beating up Thanos, gave credit to "our prop guy Russell."

"Russell would be a very, very clever man if he put that in." Kimmel replied, "So no, then? Interesting" before moving on.

You can watch the interview in the embed below. The Maison du Mépris part begins at 6:13.

House of What? — As we've covered before, one of the biggest open secrets about WandaVision is that it may be a loose adaptation of the 2005 Marvel comic book series House of M. In House of M, Wanda rewrote reality to bring back her lost children, rewriting the entire Marvel Universe and its history in the process. The long-lasting consequences of the series saw a huge decimation of Earth's mutant population, among other things.

While there is plenty of speculation that House of M can open the door for the X-Men to finally enter the MCU, it's more plausible that WandaVision will have Wanda using her unparalleled psychic powers to create a false reality. Another big touchstone for the series is the acclaimed 2016 Marvel series The Vision, from writer Tom King, where Vision creates an artificial family in a Washington, D.C. suburb.

Olsen's House of Secrets — What's fun about Elizabeth Olsen hiding WandaVision's inspiration from House of M is that Olsen has previously talked about the importance of the comic book. When Olsen was first cast as Wanda for the 2015 movie Avengers: Age of Ultron, Olsen was recommended a stack of unidentified comics from director Joss Whedon. Years later, Feige told Olsen that "those specific comics" are the inspirations for WandaVision.

Reading between the lines, it sure sounds like House of M were those comics. In a 2015 interview with Wall Street Journal Olsen also talked about the comics and her character's role in them. "In the comics, Scarlet Witch is eventually the most powerful person in the universe," she said. "She's the ultimate superhero, and she's a character that connects parallel universes as well."

Years later, in a 2020 interview with Entertainment Weekly, Olsen said, "I've always been hungry to lean into the comic book stories that we're leaning into in this show. Which is the reason why I wanted to be a part of the Avengers, to begin with, when Joss asked me to. He said, 'Look at these comics and tell me if you're interested.' Those specific comics are the ones that Feige said, 'This is what our show's going to be about for WandaVision.'"

The Inverse Analysis — Five years of dodging the wrath of Marvel and Disney for revealing spoilers, Olsen is skilled at saying too much in interviews. But based on all the past traces of evidence, we can at least deduce that WandaVision is taking inspiration from House of M, even if it isn't a 1:1 adaptation of the comic. (In a similar fashion, movies like Captain America: Civil War and Avengers: Infinity War weren't strict adaptations of comics like Civil War and The Infinity Gauntlet, but they are clear inspirations if you know where to look.)

WandaVision will premiere January 15 on Disney+.