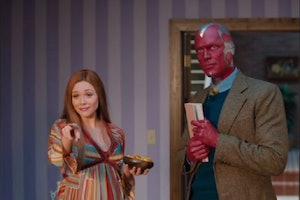 WandaVision is almost here. After nearly a year of trailers, teasers, leaks, and publicity, the Disney+ series is only 10 days away from its premiere date. Marvel still released another glimpse at the upcoming show in a new TV spot entitled "New Era." It may look vague and sanitized on first glance, but underneath a haunting conclusion looms.

Below, we're unpacking five of the biggest clues about the story that you may not have noticed on first viewing. Possible spoilers ahead.

WandaVision is a tribute to classic sitcoms, and what would a classic sitcom be without an iconic theme song? The show's opening theme seems to be done in the close harmony style of early sitcoms and radio serials, but it's very likely this may just be the interpretation for the first episode. As the show spans multiple eras, we wouldn't be surprised to hear jingles and tunes unique to each episode.

What do superheroes do for a day job? Magic, of course! Two glimpses in this new spot show Vision dressed as a magician, with Wanda wearing a fetching assistant getup. They're later shown performing at an outdoor venue to the delight of onlookers, so we may get some hijinks of Vision passing off his powers as mere illusions.

3. An Artifact from Elsewhere

In a key moment, the black and white monotone world of Wanda's creation is abruptly intruded upon by a red and yellow helicopter toy. The isolated pop of color makes for an arresting image. What is this helicopter? Is it a remnant from a past memory, or the outside world fighting to get in?

Even more frightening, a stranger wearing a beekeeper's suit emerges from a manhole in the middle of the seemingly idyllic neighborhood. Could this manhole be the metaphorical entry point between the real world and Wanda's fantasy she's created in her own head? However, the most interesting aspect of this trailer is when he turns around...

A closer look at both the helicopter and the beekeeper reveals an insignia well-known to Marvel fans: S.W.O.R.D. The Sentient World Observation and Response Department, the counterpart to S.H.I.E.L.D., has been mentioned in previous WandaVision leaks, but this trailer reveals they will play a bigger role than first assumed. It seems like S.W.O.R.D is looking for ways to get a message to Wanda, whether through objects implanted into her head, like the helicopter, or direct contact like the mysterious beekeeper.