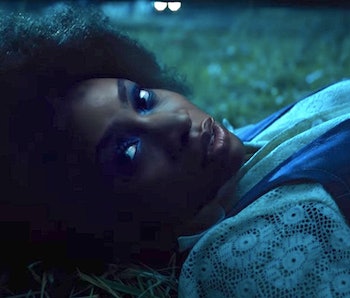 The new WandaVision trailer offered Marvel fans their first real glimpse at the adult version of Monica Rambeau. Up to now, it hadn't been clear what her role in the show would be. Previous set photo leaks had hinted she was working with the counterterrorism group S.W.O.R.D. (Sentient World Observation and Response Department). The latest WandaVision footage offers some enticing morsels about what Monica's really up to.

First introduced in Captain Marvel, Monica is the daughter of Maria Rambeau, an Air Force pilot and Carol Danvers’ best friend. The last we saw her she was a child in the 90s, but Teyonah Parris’ casting in WandaVision indicated the character would play a much larger role in the next phase of the MCU. The trailer reveals Monica is indeed working with S.W.O.R.D., and at one point she's seen wearing 1970s clothing and flying backwards across a grassy field in the middle of the day.

It’s possible she’s being thrown out of the sitcom world of Wanda and Vision, because she goes through a barrier of some kind on her way out, instead of simply landing on the ground. The next time we see Monica, she’s lying on the ground, it’s dark outside, and S.W.O.R.D. agents are swarming the area.

S.W.O.R.D.’s involvement in WandaVision includes armed agents, tents, lights and a helicopter. It looks a lot like what S.H.I.E.L.D. had set up around Mjolnir in 2011’s Thor. With that in mind, it’s possible Monica was officially recruited to S.W.O.R.D. to assist with Wanda’s dilemma.

Based on the trailer, we can also surmise that the Scarlet Witch is stuck inside a pocket dimension of some sort, which is protected by an external barrier. That means the events of Wanda’s warped reality aren’t simply happening inside her mind — and they could negatively impact the real world. That would certainly explain S.W.O.R.D.’s involvement.

In the comics, Monica becomes a superhero. She's adopted many mantles, including Captain Marvel and Spectrum. She has the power to absorb and manipulate electromagnetic energy (gamma rays, infrared radiation, etc.), fly, as well as transform into energy itself. It’s possible that Monica was sent into the pocket universe to absorb the energy and snap Wanda out of this fake world, or simply to study this energy in the real world.

Conversely, this moment from the trailer may be the moment Monica gains her powers. Whatever the case may be, the footage from the WandaVision trailer is enough to get fans excited for all the series has in store.

WandaVision will be released in late 2020 on Disney+.