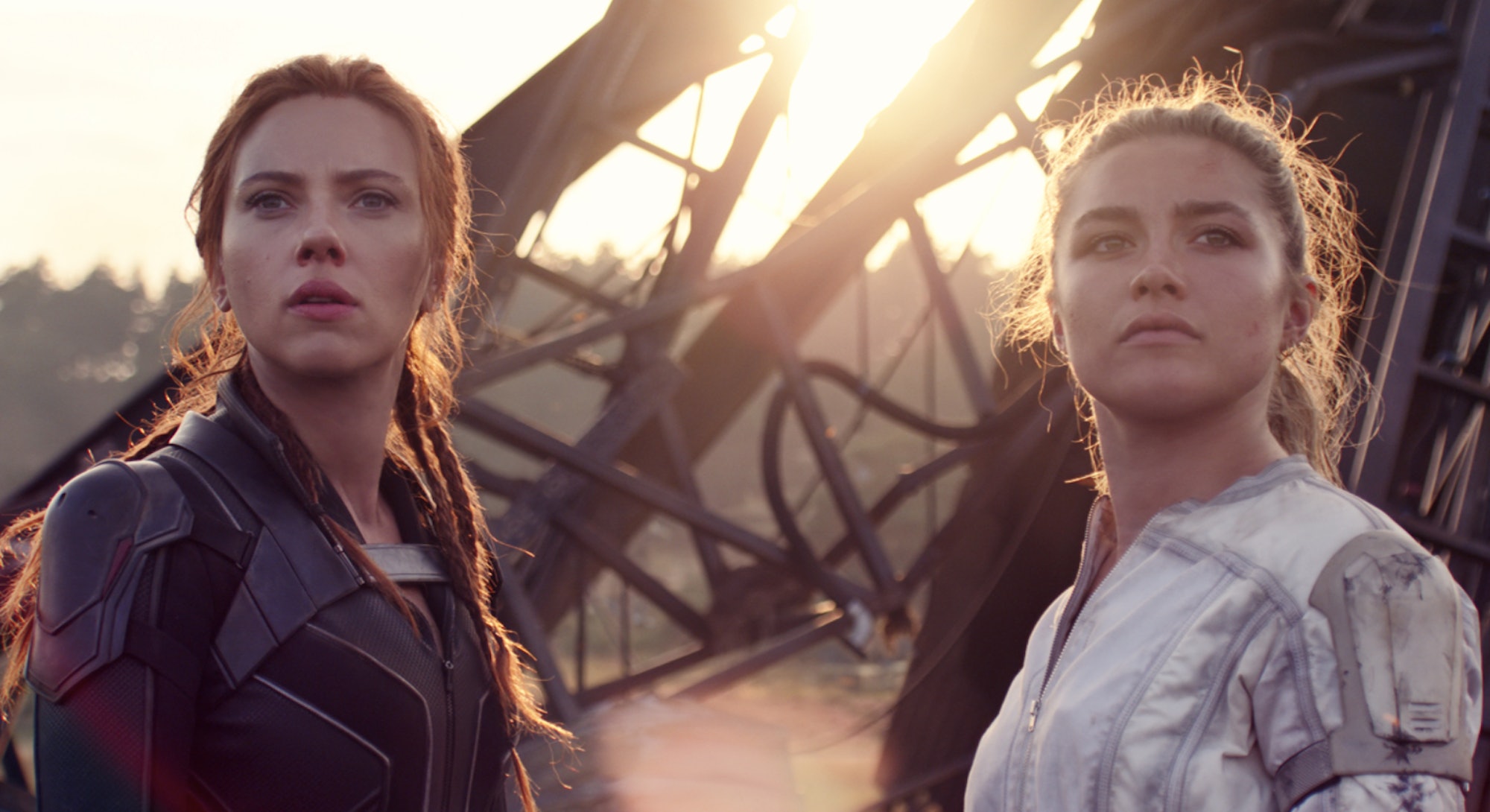 The stun batons, Widow’s Bite bracelet, and Glock 26 have been passed to the next generation.

After the events of Black Widow, the mission of Scarlett Johannson’s Natasha Romanoff — to clear the red in her ledger and prevent others from suffering her fate — is now in the hands of her younger “sister,” Yelena Belova, played by Florence Pugh.

Yelena’s future will be, in part, defined by how she lives up to her iconic predecessor.

This a fairly common story arc among male comic book characters; rarely do we see this transition play out among female characters. It’s a welcome change and an idea that's long-lived off the page or between the panels of comic book stories.

Cate Shortland’s Black Widow marks Johannson’s long-awaited (and we do mean long) solo movie. It’s also a case of a woman superhero passing her mantle to a successor. Black Widow sets a new precedent for legacy storytelling in the MCU, and if we’re lucky, in Marvel Comics, too.

One of my favorite aspects of comic books is the consideration of legacy, titles, costumes, and color coordination passed from one hero to the next. The idea of generations forming a grand story around a single mantle is irresistible. It’s comic book ancestry, making the act of browsing through back issues akin to thumbing through your grandparents’ photo albums.

Maybe it’s because I started getting into comics shortly after the debut of Batman Knightfall (1993-1994), which not only saw Jean-Paul Valley take up the mantle of the Bat but later Dick Grayson, the heir apparent who had evolved from Robin to Nightwing. It was a role he always seemed destined for.

But like so many things in comics, the successions in Knightfall didn’t last. Bruce Wayne eventually returned to reclaim his cape and cowl. But the idea is a sticky one. The notion that another person could take up a familiar guise and either destroy or uphold that legacy, as Valley and Grayson did, respectively, fascinated me at an early age.

As a child enchanted by fairy tales, myths, and how the same story could vary based on writer and artist, I’ve always loved to see the familiar upended. Two of my early forays into the concept of superhero mantles as something to be claimed rather than born into are these What If? gems:

Naturally, these early explorations led to deep-dives into many legacy characters — something DC Comics always did better than its rival Marvel. The Flash, Green Lantern, Hawkman, Captain America, and Green Goblin all saw legacy story arcs. (We've seen some of these examples explored in film and television like Spider-Man 3, The Dark Knight Rises, The Flash, and Spider-Man: Into the Spider-Verse.)

But whether in film, television, or comics, very few of these stories involve someone inheriting or stealing the namesake and costume of a predecessor centered on a woman.

I’d reckon it’s because so few women from the Big Two (DC and Marvel) had their own solo books at the time. As a result, there wasn’t an editorial need to shake up the books by putting someone new in the costume.

Black Canary was one of the earliest examples of female-led legacy storytelling in comics, with Crisis on Infinite Earths (1985-1986) retconning events. Hence, the Golden Age Black Canary (Dinah Drake) was, in fact, the mother of the current Black Canary, Dinah Laurel Lance. The recent DC film, Birds of Prey, referenced this point, with Lance (Jurnee Smollett) mentioning her mother’s vigilante days. Unfortunately, we didn’t get to see her mother in action in a flashback. Here’s hoping that a future Black Canary project will make space for that story.

More of DC’s legacy women emerged later; many are connected to the Justice League’s predecessor, the Justice Society of America.

Wild Cat, Star Girl, Cyclone, and even Wonder Woman’s mother Hippolyta became legacy heroes through various time travel shenanigans. HBO’s Watchmen is a recent example that changed the game with its exploration of legacy (no spoilers!), creating an open-ended possibility of a character already defined as one thing potentially becoming something else.

On the Marvel side, the most notable example is Carol Danvers, though her succession of Mar-Vell as Captain Marvel took decades and numerous aliases — Ms. Marvel, Binary, Warbird — before she emerged as the superheroine fans know today.

And it was Monica Rambeau who first succeeded Mar-Vell as Captain Marvel, though after a little over a decade, she picked up other monikers. The film Captain Marvel plays with some of Danvers’ legacy, but Annette Bening as Mar-Vell without a career as a superhero doesn’t have the same impact as the comic books.

Passing the torch to women only makes these cinematic universes brighter.

It’s notable that many of the aforementioned legacy characters, and others like Shuri (Black Panther), She-Hulk (now Hulk), and Kate Bishop (Hawkeye), accepted their mantles from men.

As rare as women in the legacy character role can be, women passing their mantles on to other women is even rarer. Marvel’s Spider-Woman is a significant example, with Jessica Drew, Julia Carpenter, and Mattie Franklin all serving as Spider-Woman, often simultaneously. Batgirl is another, with Barbara Gordon, Cassandra Cain, and Stephanie Brown wearing the cowl (again, simultaneously).

Kamala Khan adopted the name Ms. Marvel with Danvers’ blessing, and Holly Robinson took over for Selina Kyle as Catwoman when the latter was pregnant. But except for Ms. Marvel, these titles are either shared or given back to the original. That’s what makes Yelena Belova’s position in the MCU so interesting.

In the comics, Yelena holds the title of Black Widow at the same time as Natasha, though she was an adversary rather than an ally. More recently, as in Kelly Thompsons’s Black Widow comic this year, Yelena works alongside Natasha as a partner under the moniker White Widow.

There’s an ingredient of legacy there, but Natasha is still alive, and so the impetus for Yelena to live up to her legacy and find her own way isn’t the same as it now is in the MCU. While there’s certainly room to explore shared mantles, facing the legacy of someone who is gone adds a certain level of emotional impact. Certainly, as we’ve seen this year with The Falcon and the Winter Soldier, Sam Wilson (Anthony Mackie) could not have become Captain America if he had to do it under Steve’s watch and with his advice.

What excites me most about Yelena becoming the next Black Widow (or White Widow) is the same thing that excited me about Sam becoming Captain America. Should director Cate Shortland get to make the movie sequel she hopes to, there will be an unmistakable authenticity to the voices chosen to handle the legacy aspect of these characters.

Sam Wilson dealing with the racial implications of becoming Captain America wouldn’t have hit so hard without a Black man, Malcolm Spellman, as the head writer. Similarly, Yelena’s consideration of sisterhood and women saving other women from systems of abuse and oppression wouldn’t have carried the same emotional impact without Shortland and screenwriter Jac Schaeffer.

On the comics side, it’s the primary reason why I think Carol Danvers as Captain Marvel and Kamala Khan as Ms. Marvel have had such an impact as legacy characters and have only increased in popularity through other forms of media — because Kelly Sue DeConnick and G. Willow Wilson were able to bring their own sense of what the characters’ legacies meant to them, rather than what their legacies mean to male characters in a male-dominated industry.

As the MCU’s Phase 4 continues its prioritization of inclusivity, DCEU’s exploration of the multiverse begins in earnest. Perhaps projects like Ms. Marvel, Hawkeye, The Marvels, Thor: Love and Thunder, The Flash, Supergirl, Batgirl, and Zatanna will showcase that passing the torch to women only makes these cinematic universes brighter.