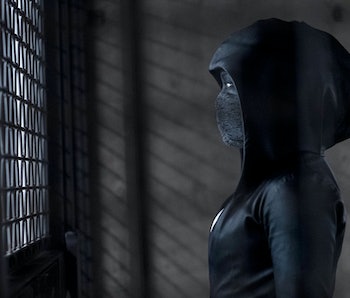 This article about the limited series Watchmen was originally published on May 8, 2019 and updated on May 11, 2021 following the release of the season on HBO. Read on for the original article, with some new changes to reflect the latest updates on this topic.

“Nothing ends, Adrian. Nothing ever ends.” How right Doctor Manhattan was. In 2019, the story of Alan Moore and Dave Gibbons’ Watchmen continued in a brand new live-action series on HBO from the co-creator and showrunner of Lost and The Leftovers, Damon Lindelof.

In May 2019, the first official teaser trailer was released, giving eager Watchmen fans a look at the series and all the ways it will stick to Watchmen lore and build on it. Cast members Regina King, Don Johnson, Jeremy Irons, and Jean Smart all got considerable screentime as the trailer gives us a better taste of the plot (more on that below).

HBO’s Watchmen not a reboot, nor is it a remake. In a long letter posted in a series of pictures on Instagram back in May 2018, Lindelof explained how the new Watchmen is inspired by the original and acknowledges it as canon but isn’t just picking up where the comic left off. In that same letter, Lindelof explained how much of an impact the original Watchmen comic book had on his professional career and personal life.

“Those original twelve issues are our Old Testament,” he wrote. “When the New Testament came along, it did not erase what came before it. Creation. The Garden of Eden. Abraham and Isaac. The Flood. It all happened. And so it will be with ‘Watchmen.’”

Here’s everything we know about Lindelof’s Watchmen, including details about its story and continuity and what awards the critically-acclaimed series picked up.

When was the Watchmen release date on HBO?

Watchmen premiered on October 20, 2019 on HBO. It aired every Sunday through its nine-episode season.

Watchmen is a 12-issue comic book published by DC Comics in 1987. Set outside mainstream DC continuity and in an alternate timeline of our “real” world, Watchmen envisions superheroes as broken, immoral people who inadvertently become pawns in a game of fascist chess.

Set in the mid-‘80s, the story of Watchmen concerns the mysterious murders of retired superheroes carried out by an unknown assailant. Rorschach, a ruthless masked vigilante, begins a temporary reunion of his former “Minutemen” colleagues to find out who is targeting them and why.

Wasn’t there already a Watchmen movie?

In 2009, after many years of starts and stops and a revolving door of directors, 300 director Zack Snyder finally achieved a big-budget Hollywood version of Watchmen in a lavishly produced production that was almost too dedicated to the source material.

Critics and fans to this day argue over the film’s merits. The most recent analysis worth the read is an essay from Tom Breihan over at The AV Club, which argues that Snyder was unquestionably in love with the comic but missed the point of its themes.

Explains Breihan, “To Moore, heroes are either ineffectual and useless, or they’re fearsome fanatics out to destroy lives. The impulses that produce these heroes are bad impulses. They’re about domination. There’s nothing cool about them. And yet Snyder can’t help but make everything look as cool as it possibly can.”

Is the HBO Watchmen series a reboot? A sequel? A prequel?

While DC has published both a prequel (2009’s Before Watchmen) and a sequel (2017’s Doomsday Clock by Geoff Johns), neither involving the original creators, Lindelof told fans in a lengthy letter on Instagram that his Watchmen will be a “remix” that acknowledges the original story as canonical but follows its own path with its own characters (save for a few, which we’ll get into in a bit).

Insisting that the events of the original comic “happened,” Lindelof said: “To be clear, Watchmen is canon. Just the way Mr. Moore wrote it, the way Mr. Gibbons drew it, and the way the brilliant John Higgins colored it.”

It’s not a sequel, though. “This story will be set in the world its creators painstakingly built… but in the tradition of the work that inspired it, this new story must be original. It has to vibrate with the seismic unpredictability of its own tectonic plates. It must ask new questions and explore the world through a fresh lens. Most importantly, it must be contemporary.”

While the comic was set in the 1980s, an era “specific” to Ronald Reagan and Margaret Thatcher, Lindelof says the new series will “resonate with the frequency of Trump and May and Putin.”

Is there a trailer for Watchmen?

Yes! A teaser dropped in May 2019, followed by a full trailer shortly before the series premiered.

What’s the plot for HBO’s Watchmen?

Lindelof has kept true to his May 2018 Instagram comments. The world of HBO’s Watchmen looks more modern than the alternate 1980s world presented in Moore’s Watchmen. This version takes place mainly in Tulsa, Oklahoma, in 2019. A white supremacist group known as the Seventh Kavalry has been inspired by the writings of the late Rorschach, waging war against both minorities and the police officers who attempt to protect them. As a result of the attacks, police must not disclose their identity, instead opting to wear masks and costumes.

The main plot of Watchmen concerns Angela Abar, also known as “Sister Night.” She gets brought into a mystery that puts her in the center of two competing plots to kidnap the omnipotent and all-powerful Doctor Manhattan. Her journey allows her to unearth several parts of her past, including her surprising connection to Hooded Justice, considered the original masked hero.

Who is in the cast of Watchmen on HBO?

Who is the composer for Watchmen on HBO?

Trent Reznor of Nine Inch Nails, who won an Oscar for composing the eerie soundtrack to 2010’s The Social Network.

What’s with the yellow masks?

Yellow is a recurring motif in Watchmen, reflective of the Comedian’s bloodied smiley face pin, which is a visual metaphor for the story.

In previews being uploaded to Instagram (@watchmen), police force members are seen wearing yellow masks. It is truly difficult to determine the exact context of all of this, but safe to say there is definitely something foul when it comes to law enforcement in the modern world of Watchmen.

In many ways, Watchmen is reflective of our own real world. Nothing has changed.

Did Watchmen on HBO win any awards?

Will Watchmen return for Season 2?

While Watchmen earned critical acclaim in its nine episodes, don’t expect a sequel. Showrunner Damon Lindelof has said he would not continue on should the show get a Season 2, telling The A.V. Club, “These nine episodes are sort of everything that I have to say at this point about Watchmen.” He has given his blessing to HBO to give the reigns to another showrunner if they choose to continue. However, the network then went on to say that they are not pursuing a second season at the moment due to Lindelof’s decision.