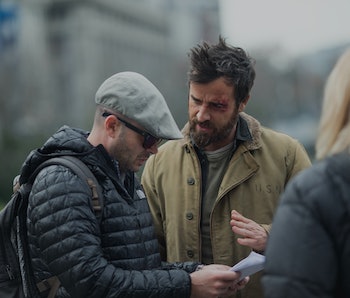 Even in the current era of the famous television showrunner, Damon Lindelof stands out. In the early 2000s, the cult hit Lost established his storytelling style that mixes mystery with philosophy. In the ensuing years, he’s become known for staying plugged into conversations around pop culture despite quitting Twitter. He’s offered honest opinions around shows like Game of Thrones or the practice of television binge-watching.

He’s also written films like Tomorrowland and Prometheus and helmed the HBO show The Leftovers, which is going into its third and final season. Curiously, both in its place in culture and its impact on Lindelof’s career, The Leftovers has been almost the opposite of Lost. Season 1 garnered a mixed critical response, which resulted in a smaller fan base. But its sophomore season delivered some of the most innovative and unique television of the modern era and earned a Peabody Award. Lindelof has experience every facet of audience and critical favor and the ways it can change on a dime. He takes it all in stride, telling Inverse of the third and final season, “on a really simple basis, there’s so much incredible television out there — and if people chose to spend some of their time watching the 28 hours of The Leftovers, I hope that they feel it was all worth it.”

Lindelof spoke to Inverse about The Leftovers Season 3, his thoughts on Lost paving the way for puzzle box shows like Westworld, the impact of Trump’s election on an apocalyptic show, and more.

Lost largely pioneered the mode of fandom in which viewers come together to crowdsource mysteries online. What are your thoughts on that process evolving, as it’s only grown with shows like Westworld?

It’s really exciting when it happens because it’s that idea of putting our collective heads together and trying to crack the puzzle box. But I think the more interesting conversation around that kind of show is, is this that kind of a show? Westworld invites that level of crowdsourcing, but even Jonathan [Nolan] and Lisa [Joy] said, “Oh, shit. We didn’t think that the audience was going to figure out certain things as early as they did.”

With a show like True Detective, the audience was treating it like a puzzle box mystery show — they became obsessed with the Yellow King. Then, the authors of the show had to say, “Oh yeah, that stuff is in there, but we don’t want you to be necessarily watching the show that way.” So there’s an upside and a downside to engaging in that. Lost was clearly a mystery show from the word go, and we invited that.

I’m more interested in the idea of a show teaching you how to watch it. Legion is the perfect example of that. It’s not as interested in, “Here are the twists, and this is reality, and this is not reality.” It’s just saying, “I’m trying to be something different here.” It’s more experiential.

The Leftovers is both a puzzle box show and an experiential show. How have you balanced that?

Very carefully. The Leftovers is much more interested in the emotional lives of the characters. When the mysteries start to overwhelm the storytelling, then you’re doing something wrong. Every story basically has to start with: What does this character want? What does this character feel? If we’re not in service of that, then the show spins out into crazy town.

Even so, there are ongoing mysteries, like the National Geographic Magazine issue from May 1972.

We were interested in the idea of, “Can any text be made into a religious text?” What’s the most mundane piece of writing that people might potentially derive meaning from?

I don’t mean the audience, but the characters in the show. We picked that issue of National Geographic as a text that was going to have a very specific meaning for Kevin Senior. He had been told by these voices he can hear that this issue of National Geographic is important. But when he presented that text to his son, who is not hearing voices — at least at the time that it’s presented to him — that seems like the most ridiculous thing in the world. We wanted to look at it from both ways. By the time we get to Season 3, Kevin Senior is now moved on to another text that may or may not be religiously significant.

And what about themes or images in the show that aren’t necessarily puzzles but keep popping up — like dogs?

We have a culture that looks at dogs as this thing that makes us feel good. The opening scene of Lost involves a character basically waking up in the jungle and feeling very out of it, and scared and then this dog comes trotting up to him and you suddenly feel like, “Everything’s gonna be okay because that’s a dog!”

In The Leftovers pilot, when a dog comes trotting up to our character five minutes in, its head gets blown off. That’s the world that The Leftovers is. We’ve often used dogs in a narrative way of saying, “This is how you’re supposed to feel about this world.” At the end of Season 2, when Kevin wakes up in the quarantine and frees his dog, you’re sort of like, “Oh now Kevin has at least got his dog. Everything’s going to be okay just like the end of Season 1.” But that dog then takes off and runs across the bridge, basically saying, “I do not want to be in this show anymore.” We’re definitely interested in the idea of the dog.

Were there any particular pop culture touchstones you used in shaping Season 3?

Picnic at Hanging Rock really inspired the missing girls story for Season 2. The Peter Weir movie The Last Wave inspired a lot of the storytelling for Season 3, both directly and quite literally in some cases.

The idea that there is a massive wave that is coming that is going to be the beginning of a flood that will wipe out all of humanity is a biblical idea. We know that it is symbolic of God’s wrath because we have disappointed him or her in some way. So, the flood is the perfect functioning metaphor for an end of day story. The Leftovers has always been really interested in the idea of fire and water, but particularly water.

Speaking of the end of the world, because apocalyptic thinking has seeped into the real world more prominently after the American presidential election, has that changed your perception of Season 3 at all?

We wrote the show between January and August of 2016. While there was spirited political conversation at all times, we were all feeling cocky and confident that Hillary Clinton was going to become the president of the United States, and that would be a step away from the apocalypse. But that idea in The Leftovers is that the Sudden Departure forced everyone to reevaluate the world they lived in and suddenly understand that things were not as stable as they seemed. They were surprised, and unpleasantly so. I think all of us experienced that sensation on the evening of November eighth. I do want to say that’s the way we feel, but a large part of our country was celebrating. I think that’s an interesting idea too — how disconnected we were to what was really going on.

Are we closer to the apocalypse now than we were a year ago? I don’t think so. I’m not a fan of Donald Trump by any stretch of the imagination, but one of the things we tried to say in the third season of the show is that every generation of humans thought the world might end while they were alive. That’s kind of narcissistic and interesting.

This is Part 1 of this interview with Damon Lindelof; look out for subsequent installments throughout the season as The Leftovers airs.