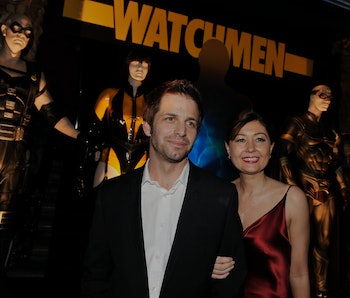 Zack Snyder is currently busy with Batman v. Superman: Dawn of Justice and Justice League, but it seems the filmmaker can’t get enough of superheroes. Collider is reporting that Snyder may be once again tackling Alan Moore’s superhero thriller Watchmen, this time as a series for HBO. More specifically, they’re reporting that he has gone to meetings.

The filmmaker made Watchmen, Alan Moore’s seminal 1985 graphic novel for DC Comics, into a polarizing feature film in 2009. Thought to be “unfilmable,” the graphic novel made for difficult source material, which is likely why Snyder directed an incredibly faithful adaptation. Most people didn’t really go for it (as evidenced by comedian Patton Oswalt’s and star Patrick Wilson’s crowd-aided discussion.)

Can the Watchmen succeed on television? One of the criticisms of Snyder’s film was that the hefty 12-issue graphic novel couldn’t fit into a two-hour movie, and as a result Watchmen had a lengthy running time — and that still became a point of contention. There’s just no winning for a Watchmen adaptation, it seems.

In 2012, DC published Before Watchmen, a series of prequel comics that further explored the mythos. These books didn’t have the approval of Alan Moore, who also distanced himself from Zack Snyder’s movie. It’s unknown if these prequel comics will be the source for the proposed HBO series.

Personally, I adore Watchmen, both Moore’s book and Snyder’s vision for it. The beginning of Dr. Manhattan and the rise and fall of his Martian palace is one of the most breathtaking things ever on film, CGI or otherwise. While Snyder was a “slave” to the source material, he created the best adaptation anyone could have asked for.

Which makes a TV series redundant. Whether or not it happens — Collier makes clear that Snyder is only taking meetings — it’s still indicative that someone, somewhere wants to try Watchmen again.

More like this
Entertainment
8.2.2022 12:30 PM
How Scott Snyder is blazing a new path in comics after 'Batman'
By Eric Francisco
Entertainment
8.4.2022 7:00 AM
The Sandman release date, time, plot, cast, and trailer for Netflix's dark fantasy series
By Jeff Spry
Entertainment
8.14.2022 1:30 PM
Why the Andor trailer could be setting up a Darth Vader fight scene
By Dais Johnston
Share: