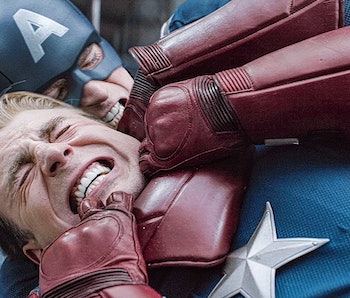 It’s time to go multi-versal. After Marvel explores inter-dimensional horror in Doctor Strange in the Multiverse of Madness, one of the last Phase Four MCU series to hit Disney+ will be Marvel’s animated What If…?, an anthology that ostensibly explores alternate versions of MCU history. “What if Peggy Carter picked up Steve’s shield to become Captain America?” is one of the many thought-starters the series will explore using animation and voice acting from the live-action stars of the Marvel Cinematic Universe.

What If…? was one of many movies and shows announced during Marvel Studios’ San Diego Comic-Con 2019 presentation on July 20. Studio head Kevin Feige confirmed that What If…? would be arriving on Disney+ in 2021. Many Marvel Comics fans will probably recognize the “What If…?” brand of alternate stories, but what does it really mean.

Here’s everything we know about Marvel’s upcoming What If…? series, including the expected release window, who will be in the cast (fair warning: so, so many actors are coming back!), and what fans can expect from the show’s stories.

What is the plot of What If…??

What If…? is based of a popular, non-canonical series of Marvel Comics stories which ran from 1977 to 1984. The comics pondered what would happen if our favorite Marvel heroes found themselves in entirely different situations, like if Spider-Man joined the Fantastic Four or if Jane Foster found Thor’s hammer. The show basically explores alternate timelines in which things went very different.

Marvel Studios has confirmed that Jeffrey Wright (Westworld) will narrate the series as the Watcher Uatu. But, the studio has yet to confirm which exact What If…? storylines they will be adapting from the comics, with one notable exception.

What is the What If…? release date?

Entertainment Weekly announced that What If...? would be premiering at some point in August 2021. The official trailer then clarified the show would premiere on August 11.

Yes! After some preliminary footage was screened at D23 2019, a full trailer for What If...? was released in December 2020. It showed footage from several of the 10-episode season, including Peggy Carter becoming a super soldier, a young T’Challa becoming Star-Lord rather than Black Panther, and perhaps most surprisingly, a zombified Captain America.

The official trailer for What If...? dropped on July 8, 2021. It highlights several other stories, including Tony Stark being saved from the bombing that made him Iron Man by none other than Killmonger.

How many episodes will What If…? Season 1 have?

Kevin Feige revealed in an interview with Buzzfeed Brazil that What If...? would have 10 episodes in its first season. That makes it the most for an MCU Disney+ series so far, with WandaVision having 9 episodes and The Falcon and the Winter Soldier and Loki each releasing 6.

The more appropriate question is, “Who isn’t in the What If…? cast?” because the second you look at the roster, you might feel a bit overwhelmed.

Feige previewed the cast during Marvel’s SDCC 2019 presentation, which consisted of a huge graphic featuring the names and faces of many an MCU alum. Notable cast returns include Chris Evans, Toby Jones, Jeremy Renner, Michael B. Jordan, Michael Douglas, Natalie Portman, Karen Gillan, and Dominic Cooper (but really, that’s just scratching the surface). For the most part, the cast will likely reprise the roles they originated in their respective MCU films but those characters will be thrown into entirely new situations.

Based on all of that, we know stories will include characters from MCU movies like Black Panther, the Thor trilogy, Ant-Man, all three Captain America movies, and both Guardians of the Galaxy movies. And there’s of course room for huge characters like Josh Brolin’s Thanos and Samuel L. Jackson’s Nick Fury.

Who is the watcher Uatu in What If…?

The Watchers are one the oldest known species in the universe. Their job is to collect all the information in existence and compile it for future reference. They are able to see everything, so they know what happens across the multiverse and with every character in existence in the Marvel world. Wright will be playing a Watcher named Uatu, who we haven’t seen before but will become our guide through What If…?. He observes different storylines from across the multiverse.

The Watchers have already been teased in the MCU during Guardians of the Galaxy Vol. 2 when Rocket, Groot, and Yondu are jumping through the cosmos to get to Peter Quill and the gang. For a brief moment, their ship, the Benatar, passes over a planet where the Watchers are listening to Stan Lee (in one of his many cameos) tell a story.

How does What If…? connect to the rest of the MCU?

The What If…? comics are considered a non-canonical addition to the world of Marvel and don’t influence events happening in the main continuity. However, they’re still “real” in the sense that the events depicted happen in different versions of reality that exist in the multiverse.

This animated series probably won’t directly impact the core MCU, and it will instead offer viewers a respite from other Phase Four stories by presenting something unusual, new, and fun. However, this could change as new information emerges about the What If…? stories that get adapted.

Do I need to read the What If…? comics before I watch?

It’s unlikely the What If…? comics will be essential reading before you dive into the animated series. After all, the MCU has many striking differences compared to the comics continuity.

However, this unique comics mini-series elaborates on a ton of fun thought experiments — and that’s the vibe the Disney+ seems to be aiming for. Reading the What If…? series might help acclimate anyone to the idea of seeing your favorite heroes in new situations or taking on new powers, so why not give it a shot?

Plus, chances seem high that not every What If…? storyline from the comics will make their way into the show, so you can treat yourself by reading them all beforehand.

Yes! In the interview that Kevin Feige did with Buzzfeed Brazil mentioned above, he said that Marvel Studios was already hard at work at Season 2 of What If...? Like Season 1, it will consist of 10 episodes, but it’s unknown how long it will air after the first season drops.

You’ll only be able to watch What If…? only on Disney+, so make sure you get a subscription set up before the show is released in August 2021.