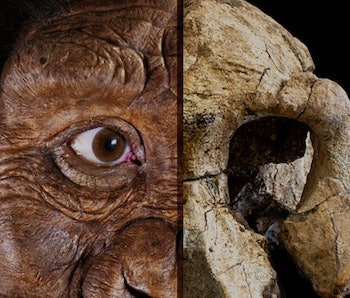 Hi, everyone! Welcome to Inverse Daily. I’m Sarah, and I’m as happy as an unruly golden retriever that you all are here.

But before we get into it, some updates from Inverse HQ:

“If you believe the argument, isn’t it cool that we continue to be bombarded by supernova ejecta?”

Sleep is essential for our survival and something we spend one-third of our lives doing, but according to Dr. Ying-Hui Fu, of UC San Francisco, we know astonishingly little about how sleep actually works. But Fu has a game plan. In a recent interview she explained to me that by identifying the genes and mutations that cause people to naturally sleep less, scientists can gain a better idea of how sleep is regulated at molecular and neuronal levels. In turn, Fu says those studies can “help us find ways to not only bring relief to those who suffer from sleep problems, but increase sleep efficiency for everyone to ensure healthy aging.”

That dream may soon become a reality. In a study released Wednesday, Fu and her team discovered that a mutation in the gene ADRB1 is linked to the likelihood of being a “natural short sleeper.” These individuals feel rested after an average of just four to six hours of sleep a night — something that this snooze-lover can’t imagine.

Learn about the science of needing significantly less sleep here.

Long before you and me, there lived an ancient human species called Australopithecus afarensis. You might have heard of them because of a 3.18 million-year-old lady known as Lucy. But before there was A. afarensis, there was the Australopithecus anamensis — the oldest known member of the Australopithecus and a group that likely coexisted with Lucy’s kind for 100,000 years before dying out. And because of the recent unearthing of a “remarkably complete” 3.5 million-year-old A. anamensis cranium in Ethiopia, we now have the privilege of looking at the face of our likely ancestor. This is the first cranium of this species ever discovered, and as its discoverers put it, “it is good to finally be able to put a face to the name.”

Click here to take a peek into the past.

Let’s get this out of the way first: Caloric restriction and dieting to lose weight are not the same thing. Technically, caloric restriction is defined as “reducing average daily caloric intake below what is typical or habitual, without malnutrition or deprivation of essential nutrients.” And while more research is needed to know the long-term effects the practice has on humans, it has been shown to be an effective way to lose weight and improve several aspects of heart health.

The problem, though, is that even while you’re still getting all your required nutrition, it can be pretty hard to maintain caloric restriction all the time. So a team of researchers came up with an alternative, one that lets you eat whatever you want — corndogs, Popeyes chicken sandwiches; whatever. There’s just one catch: You have to fast for 36 hours straight and then eat the good stuff.

The scientists call it “alternate day fasting” (ADF), and in a randomized control trial, it resulted in improved torso fat composition, reduced caloric intake, and reduced body mass index. That sounds nice, sure, but I’m also here to remind you that eating healthy is way more important than reducing how much you eat. The researchers behind this study note that a “wholesome and balanced diet” is crucial to foster the potential benefits of (ADF) and recommend talking to your physician before you try it.

Read up on the next health trend to infiltrate your co-worker’s watercooler chat here.

Hurricane Dorian reached Puerto Rico and the Virgin Islands on Wednesday, inundating them with rain rivaling the amount Hurricane Maria poured over the Caribbean. The winds from Dorian, which was upgraded to a hurricane from a tropical storm shortly before it reached Puerto Rico, were nowhere near as destructive as those of the 2017 storm, though, which was a Category 5 hurricane.

However, as the week goes on Dorian is expected to increase in intensity, possibly up to a Category 3. Meteorologists predict it will hit Florida over the weekend, so if you live in the southeastern United States and have plans over Labor Day, you might want to make sure they won’t be canceled due to the weather and make sure your household is prepared to ride out the storm.

As summer winds down, my number of potential beach days is dwindling. (Yikes.) But whether or not I make it out for one last day in the sun, I’m taking comfort in some recently published news: One of the major ingredients in sunscreen is safe to use and really, really good at blocking damaging UV rays, even on a microscopic level.

In February, the Food and Drug Administration proposed a new rule, calling for additional testing on a dozen ingredients commonly found in sunscreen. This report sparked growing concern over sunscreen safety and a dangerous DIY sunscreen movement. One of the chemicals cleared by the FDA’s February report, however, was titanium dioxide. Titanium dioxide has been scrutinized before in scientific literature, especially when it’s in a really tiny form called a nanoparticle.

But as Maggie Green tells me, a new study shows that nanoparticles of titanium dioxide are totally safe to human skin cells and can actually protect these cells from UV damage. In the study, the scientists used a technique called microfluidics to test the combined effects of titanium dioxide nanoparticles and UV damage directly on skin cells. According to senior author Craig Priest, Ph.D., if this method “can streamline the development and use of nanoparticles in a safe way, that’s good for all of us.”

Discover this finding that could help scientists test sunscreen safety once and for all.

Today, that’s Pinterest’s efforts to spread accurate information about vaccines. Last year the company announced it would stop showing results for searches related to vaccines in an effort to prevent people from encountering “harmful health misinformation.”

On Wednesday, it announced that removing fake science from their platform wasn’t enough — they wanted to provide science-backed expertise as well. So now, when you search for things like “vaccine safety” on Pinterest, you get reliable information from leading public health organizations, like the American Academy of Pediatrics. And that’s a good thing.

It was great to know what y’all think Inverse should cover next. Feel free to keep the suggestions coming and email me at sarah.sloat@inverse.com or say hi on Twitter.

Meanwhile, I’ll be thinking about how Inverse used science to explain why people had a crush on this kudu.

More like this
Science
5.7.2022 11:00 AM
New technology could reveal how ancient humans lived 300,000 years ago
By Paul Pettitt, Alistair Pike and The Conversation
Science
5.11.2022 11:00 PM
Look: Missing 19th century platypus and echidna specimens discovered in museum storage
By Jennifer Walter
Science
12 hours ago
200 years ago, this terror of the Amazon inspired the world’s first batteries
By Timothy J. Jorgensen and The Conversation
Related Tags
Share: