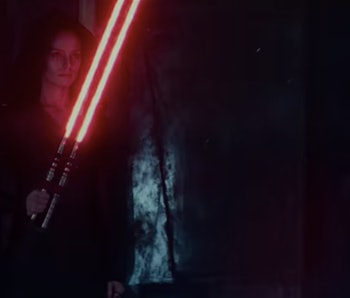 Star Wars theorists have been working overtime since last weekend’s D23 convention, which saw the release of enticing new footage from the long awaited Rise of Skywalker. A brief shot of Rey wielding a nifty dual-edged red lightsaber instantly went viral, prompting fans to speculate what “Dark Rey” could mean for the story of Episode IX. But there’s a small, but potentially critical detail about the shot you may have missed: someone’s turning away from Rey, as evidenced by the billowing black or brown cloak that’s briefly visible in the bottom-right corner.

In the above post on the Star Wars Leaks subreddit, user alexisoppa624 shared a slowed-down gif of the trailer. Ranked from most to least likely, here’s our three best guesses as to who her cloak-clad companion could be.

Rey Gets a Glimpse at Her Own Dark Impulses

Love it or hate it, The Last Jedi was all about exploring shades of grey and acknowledging that all people, particularly Force users, have aspects of Light and Dark to them. In that film, we saw Rey enticed by the Dark Side several times: in her conversations with Kylo Ren and during her visit to the eerie cave on Ahch-To. That cave appears to be where this moment with Dark Rey takes place.

Despite Luke’s warnings, Rey ventured into the cave in the hope of learning some truth about her parents. Instead, she saw mirrored images of herself, alone, repeating into infinity. With Rey having inherited a thousand generations of Jedi wisdom and sacred texts, she’s bound to have some big spiritual questions to ask. It makes sense that she would return to Ahch-To, and to this cave in particular, during The Rise of Skywalker. It’s possible that the person in the cloak is the Light Side Rey we’re more familiar with, confronted with an alternate version of herself. Were this the case, it would recall Luke’s vision in the cave on Dagobah, where he decapitates Vader only to reveal his own face beneath the black mask.

One redditor in the thread embedded above confidently declares, “It’s a vision. She’s looking in a mirror. It’s her cape. The movements are equal and opposite.” We’ve definitely seen Rey wearing a brown cape before, but to our eyes it’s too hard to tell whether or not these movements are “equal and opposite.” Still, this is the most likely explanation for Dark Rey: she’s a cautionary vision, not a reality.

Given his history of vacillating between Light and Dark, and his fascination with the Sith, it may be Kylo who ventures into the shadowy cave on Ahch-To. After all, he was a virtual tourist there throughout The Last Jedi thanks to his telepathic exchanges with Rey. There’s visual evidence to support this: it seems Rey is looking up toward someone taller than her.

As Rey ventured to the cave to learn more about her parents, The Rise of Skywalker could find Kylo in search of something he desperately wants: someone like him, by his side as he aims to restore order to the galaxy. But maybe he won’t like what he sees, as one redditor posits: “I wonder if this is a vision that Kylo is getting, Kylo really wants Rey to rule by his side, maybe seeing Rey turned to the darkside might change his mind slightly. I think Kylo needs to see himself from the outside, if that makes sense.”

The Cloak-Wearing Figure Is a Force Ghost

This possibility could apply to either of the above scenarios, but is more likely with Rey, given that we only really see ghosts appear to adherents of the Light.

Mark Hamill has already confirmed he will return in The Rise of Skywalker as a Force ghost, and it would make sense for Luke’s spirit to still be kicking around Ahch-To. He lived and died there, and the place holds enormous significance in the Jedi tradition. What’s more, Luke wears a dark brown cloak, and there appears to be a slightly luminous quality to it.

Given where Dark Rey is looking, we know the person standing across from her is at least as tall—likely taller—than her. So there’s no way this is Yoda. There is, however, a slim chance it’s another spirit who’s talked to Rey before, during her vision in The Force Awakens: Obi-Wan Kenobi. As one commenter notes, “Luke died in a lighter color” than that glimpsed in the D23 footage of Dark Rey.

One thing all these Star Wars sleuths can agree on: it’s not likely Rey’s actually turning to the Dark Side in The Rise of Skywalker. It’s most likely a vision, but who’s seeing it, and who’s showing it to them? We’ll find out in a few months.

The Rise of Skywalker comes to theaters December 20.