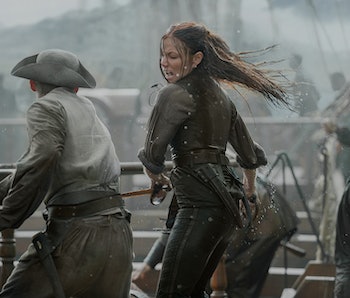 Game of Thrones has permanently changed the game for fantasy on TV. It’s proven that the genre isn’t all niche and deep-dive; immersive-world storytelling quite literally pays off. But the show’s end looms in the not-too-distant future, and with it, will come a void in smart television fantasy.

Sure, HBO has the intriguing robot-western Westworld in the works, but that leans more sci-fi than fantasy. Netflix and network TV mostly offer superhero fare (Jessica Jones, Daredevil and Luke Cage on Netflix; Arrow, The Flash, and Supergirl on The CW). MTV has that sexy elf show, but it’s not up to GoT’s quality. Amazon’s programming skews more towards slice-of-life realism (Transparent, One Mississippi); Hulu is also on the sci-fi and dystopia bandwagon (11.22.63; the upcoming Handmaid’s Tale adaptation). Showtime has Penny Dreadful, but their other offerings primarily operate in some version of the real world.

Where, then, will we turn for smart, immersive, boundary-pushing fantasy storytelling when Game of Thrones ends?

Surprisingly, Starz. Yes, that network you know for the pulpy (yet underrated) madness that was Spartacus — if Ian McShane calls GoT “tits and dragons,” he’d surely call Spartacus “dicks and blood.” Or more recently, the network you know for that Steven Soderbergh sex worker show you’ve heard chatter about. While everyone was off watching HBO, Starz quietly became the place where the most innovative fantasy storytelling was fostered and encouraged. Their offerings respect their audiences and are keenly aware that straight white dudes are not the only ones watching. These shows don’t alienate that portion of viewers by any means, but rather follow the groundbreaking idea that fantasy fans consists of more than one kind of demographic.

With fantasy-horror, they brought Bruce Campbell’s Ash and his Deaddites back in the glorious Ash vs Evil Dead. Horror-comedy hasn’t been this fun in far too long — Scream Queens was solid for a while on network TV, but as it’s a Ryan Murphy show, it quickly veered off the rails. Ash vs Evil Dead knows exactly what its fans want, but at the same time, it’s not indulgent. It knows that sometimes, less is more — each episode is a tight 30 minutes that doesn’t overstay its welcome. For TV shows banking on pre-existing fan bases and nostalgia, this is rare and innovative indeed.

On the more serious spectrum, the historical time-travel drama Outlander has become the answer to Game of Thrones shortcomings in failing to realize viewers are more than just straight men. It’s not flawless — it’s based on a series of novels that need editing just as much as the later Song of Ice and Fire books, which sometimes reflects in the show — but like Game of Thrones, it’s done an admirable job of trimming the fat and elevating the source material. As it’s been nominated for several Golden Globes, mainstream audiences have already taken note.

But they haven’t yet noticed the superior Black Sails, which, at this point, is television’s best kept secret. Like Outlander, it plays around with sex and relationships in an intriguing yet thoughtful way rarely seen on adventure shows. Non-heteronormative and non-monogamous relationships are treated in a serious way, and below, Anne Bonny is a warrior woman type like Brienne on GoT — but unlike Brienne, she’s also allowed to be a sexual being. The two concepts are not mutually exclusive.

Like Game of Thrones, Black Sails is not afraid to kill its darlings, and it’s home to stellar character development, writing, and a mixture of epic battles and quiet two man play dialogue duels.

Not to mention, with Toby Stephens as Captain Flint, it’s got the best actor-character match and portrayal since Bryan Cranston was Walter White.

Another character (shown above) is essentially a pirate Tyrion.

It’s not strictly fantasy — no dragons or time-traveling, here — but it’s got GoT’s byzantine plotting, scope, and morally grey characters. And with Long John Silver and Billy Bones, it’s hardly operating in reality as we know it. The opening title also gives GoT’s serious competition in marrying images and music in an epic way that perfectly encapsulates the show.

“Okay, so Starz might be cool now, I’ll allow it,” you might be thinking. “But what if I’m not into gritty historical drama or fantasy-horror? What if I want my mythical creatures?”

Enter American Gods. Neil Gaiman’s best novel — which is stuffed to the brim with the strange and the supernatural— is about to get a television adaptation in the hands of Hannibal creator Bryan Fuller, with Ian McShane playing the shady maybe-antagonist. And if you’re tired of fantasy being blindingly white, sick of the justification of, “But there were no black people back then…in pseudo-medieval times that never actually existed!” it also stars The 100’s Ricky Whittle.

Though it’s too soon to tell exactly how good this show will be — it will air in 2017 — it’s not too soon to determine that its chances of not being excellent are slim to none.

Game of Thrones is the biggest show on TV right now, and arguably in all of television history. When it ends, other networks will no doubt scramble to pick up the slack. But none of these shows are being hastily thrown onscreen to cash in on a trend. They’re faithfully adapted from pre-existing novels, or they’re painstakingly planned by showrunners who really care about storytelling. In your post-GoT void, or even to prepare yourself before it comes, if you’re looking for thoughtful innovative fantasy that’s more than simply jumping aboard a lucrative bandwagon — well. You know where to find it.