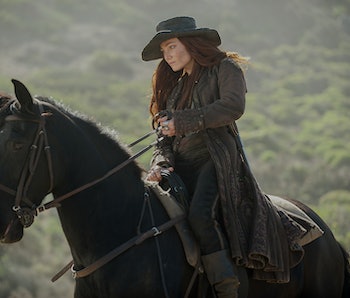 To the casual observer who knows Black Sails only by its ads, it looks like a typical show in the Game of Thrones mold: a large cast of characters scheming against a backdrop of battles, blood, and T&A. It doesn’t help that Michael Bay’s name is attached, even though he’s not involved on the creative side — because however you feel about him, “I enjoy Michael Bay for his thoughtful and nuanced portrayals of non-heteronormative relationships!” is not a thing anyone has ever said.

But believe it or not, Black Sails is the most diverse, revolutionary, queer-friendly show on TV — at least among shows that don’t overtly center on the subject, like Transparent. By queer, I mean the following definition that scholar Ramzi Fawaz has laid out: “An orientation towards a world that values multiple forms of intimacy beyond the nuclear family.”

Intimacy on Black Sails is unconcerned with the trappings of traditional heterosexual relationships, i.e., marriage, monogamy, and power skewed toward men. Open relationships abound. Four lead characters are sexually fluid, and two of the show’s primary romantic relationships are threesomes. Even more astoundingly, Black Sails doesn’t treat them salaciously. Rather, it legitimizes those nontraditional relationships involving more than two people by exploring their true emotional weight.

One such relationship involves Anne Bonny and Jack Rackham, a couple with their own intriguing dynamic, as the woman is the taciturn, trigger-happy protector and the man is the chatty, flamboyant nurturer. In Season 2, Anne begins sleeping with Max, another woman. Rackham gives Anne his consent for an open relationship, so long as she returns to him at the end of the night. Later, Anne requests his presence in their bedroom. Their three-person relationship is a seesaw with Anne at the fulcrum; all Rackham and Max share is an interest in Anne.

This leads to Rackham alienating Anne by jilting her in favor of Max during a business venture. When Anne and Rackham eventually reconnect, Anne tells him they can still never marry because it would compromise her identity. Her hardcore reputation is crucial to her sense of self, since she’s living as the sole lady pirate in a world dominated by men. “I can’t be your wife,” she says. “But we’ll be together till they put us in the fucking ground.”

That line sums up the show’s approach to intimacy in a nutshell: It’s blunt, contrary to mainstream social norms, and a little crude — but damned if there isn’t something moving and oddly romantic about it.

The second troika is treated with equally considered, non-salacious storytelling. Miranda Barlow is married to a gay man in 1700s London. They have an understanding; an open marriage no less intimate for its lack of sex. Miranda seduces their mutual friend — a naval officer — but he later forges a stronger relationship with her husband. The two men fall in love.

After her husband’s death, the officer assumes the identity “Captain Flint” and moves with Miranda to the Pirate Republic of Nassau. The two remain together years later, when we’re first introduced to Flint — though in what capacity isn’t clear.

In Season 1, before we know their past, their relationship is deliberately confusing. We see Flint visit a woman who cares for him when he needs help, yet they don’t seem to be together. Just when we decide Miranda is a platonic friend, we see them have sex, though it’s far from pat. Flint seems uninterested, and both look melancholy.

When their history is revealed in Season 2, we’re left wondering whether Flint has any feelings for Miranda or if he’s simply with her out of a lingering love for her late husband. Flint is a fascinating character in his own right, ruthless and calculating away from the few things he cares about. As Flint and Miranda plan for his retirement from piracy, he tenderly asks if “she’ll have him,” which doesn’t sound platonic. But — SPOILER — she’s killed before it can be further explored.

In Season 3, Flint has a dream in which he tells Miranda he’s not sure why her death ruined him more than her husband’s. Viewers are similarly unsure; as we’re led to believe he loved her husband more. But Miranda’s response beautifully elucidates their dynamic: “I was mistress to you when you needed love. Wife when you needed understanding. But first and before all, I was mother.”

Flint’s relationship with her husband is straightforward as far as romance goes; he refers to him as “my truest love.” Miranda occupies a more complicated role in his life — a messy one that’s hard to define. And at no point does the show try to clean it up. First and before all, Black Sails is a show with deeply human characters, where nothing is black and white.

Their threesome is different than the first one: It’s more of a triangle than a see-saw, steeped in emotional connection between all parties. But it’s crucial to Flint’s character, and he’s the center of the show. In true anti-establishment pirate fashion, Black Sails audaciously builds itself on territory that holds a middle finger up to societal norms — both in the 1700s and today, when bedroom activities are still a political issue. Pirates don’t give a damn, neither does Black Sails. No other adventure show covers such an area with this degree of depth. It’s also nonchalant about it: It doesn’t laud itself for being “edgy.” It simply tells the story it wants to, almost charmingly unaware of its own uniqueness.

Even the show’s main heterosexual relationship — at least in the first two seasons — is far from typical. The woman is queer and the balance of power is perpetually tilted in her favor. These two might look like they belong on a Harlequin cover, but their relationship is anything but.

Charles and Eleanor are hardly the hearts-and-flowers types. At various points, they aren’t monogamous, and they constantly fight for control.

Most heterosexual sex scenes in comparable shows like Game of Thrones feature the woman being taken from behind. It’s a submissive position with the potential to be demeaning if both parties aren’t in the same mental place. Whether it’s featured prominently because of “historical accuracy” or whether it’s just what the writers are into is hard to say. But tellingly, Black Sails puts Eleanor and Charles together in that way only once, on her terms.

It happens after he kills her enemy, because he’s a romantic guy like that. Her response is a similar nonverbal gesture: Their whole dynamic is about fighting for the upper hand, so it’s meaningful when she assumes a position signifying that she trusts him enough to give him all the control. It’s as different as can be from the rote “bend over, woman!” style favored by other shows in the genre. Hell, it’s more progressive about sex and nudity than 90 percent of prestige TV.

Look, I’m a reasonable person who can discern cultural debris from gems — whether they’re gems other critics agree on or gems that are misunderstood. I know it sounds ludicrous to call “the Michael Bay pirate show” smart and subversive. Transformers makes my brain as sad as yours. But forget Michael Bay; he doesn’t write or direct it. Even forget the pirate part if you want; it’s a political drama above all else. There are no hook—hands or arrr-ing. And if it occasionally happens to feature shark wrestling or thrilling yet character-rich fight sequences alongside its elegant dialogue and stellar acting? No complaints about that.

On the surface, Black Sails might not seem terribly complex before its second season. But by this point, it’s more than earned the right to be taken seriously — it’s an exquisitely crafted show that demands recognition for what it’s doing. Without self-congratulation or indecency, it’s storming revolutionary territory like no other action-adventure show on TV.