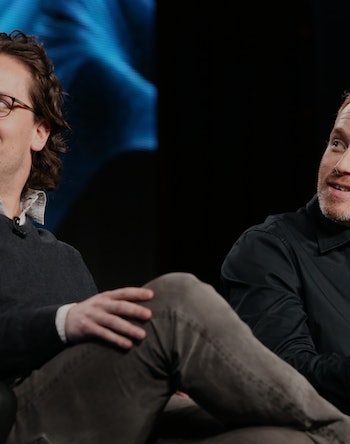 Black Sails Season 3 has been its grandest yet, with large-scale ship battles, guerrilla warfare, new cultures, major character deaths, epic speeches, and some of the best character development currently on TV. It’s no easy task to helm an enormous production of such high quality — not to mention weave history with fiction, juggle an expansive cast of colorful characters, and strike a balance between eloquent dialogue, grit, and humor — but showrunners Jonathan E. Steinberg and Robert Levine make it look seamless.

Steinberg and Levine got on the phone with Inverse to discuss what lies ahead in Season 4, the decision to kill Charles Vane, the shows they watch, their favorite Black Sails couple to write (you can probably guess), why they can hear Robert Louis Stevenson laughing at them from the future, and more.

The Season 3 finale looks like it’s setting up the endgame, with more elements from Treasure Island than ever. Will Season 4 be the last?

Steinberg: It’s hard to say. We’ve been spoiled by getting renewed so early in the past. We have an end for Season 4 that we’re very happy with.

Levine: It stops short of the book, but more than any show that I’ve ever worked on, Black Sails production is very intense. We take it one season at a time.

One interesting part of the finale was when Flint told Silver about his past and Silver had no reaction to his sexuality. Is it because of his personality — Silver only cares what others do behind closed doors insofar as the information is useful? Or is it because of the anti-establishment nature of the life — would other crew members be equally unfazed?

Steinberg: It’s a little of both. It is Silver’s personality, but their society also makes for allowances outside the norm of the day. Certain things were not as big a deal or as shocking as they might be today; certain things were more shocking. On top of that, we’re at a place in [Flint and Silver’s] story together where there’s a real friendship there.

Speaking of Flint’s sexuality, Black Sails handles relationships in a very interesting way. What was your incentive behind that?

Steinberg: The initial impulse was to tell a story about people who are outside of civilization. There are a lot of things that grow on that tree — relationships are one of them. Social norms break down, and it became a pretty organic evolution for characters like Anne, Max, and Flint.

When I spoke with Zach McGowan, he said he thought he might only be around one year. Was Vane originally supposed to die sooner?

Steinberg: Gates was the only character we knew would be around for a year —then Silver would take that quartermaster position. In terms of Vane, that decision was hard. As much as he was a fan favorite, he was one of our favorites both as a character and as a person. The emotional reaction people are having now [to Vane’s death] is the same one we had: “Is this the right way to go? Can the show go on without him?”

Levine: As a rule of thumb, we try to never do anything for shock value. It’s more, “Is there story after this that’s better than the story would be without it?”

Steinberg: You’ll see that he never leaves the story; his ghost lingers over many people’s stories.

I know you two have a joint Twitter account, and Jon, you have your own as well. The internet can be a harsh place for showrunners who make decisions like that —how has the fan response been for you in that regard?

Steinberg: We knew going in that there would be a reaction to [Vane’s death]. It would have been worse if there hadn’t been; if people hadn’t cared. Obviously we hope people don’t stop watching the show, but on some level, people’s reactions are what they’re supposed to be. We wanted to do a season about death. The end of episode 9 is not a crowd-pleaser.

You’re probably aware that the general critical consensus is that each season has been better than the last. Do you read reviews and actively address criticism?

Steinberg: I don’t think you want it to be normative – responding to individual reviews on a regular basis. Each season has been better than the last, but some of that is us figuring out how to tell the story. It’s hard to make a story on TV; you make your mistakes live. Some of what we’ve tried hasn’t worked the way we’d hoped, and we’ve learned. But if you’re not trying those things, you’re also in trouble.

It’s interesting that you’re both American, since the dialogue on the show is seamlessly old-British sounding. Has that been difficult for you? Where did you find the voice of the show and characters?

Steinberg: We did a lot of reading; there’s a bunch of influences in it. At the beginning, there was a lot of James Goldman The Lion in Winter. That kind of speech pattern. But at a certain point, the characters develop their own way of speaking. They kind of accrete over time, and it’s partially informed by the actors.

Obviously many of your character arcs are pre-defined by history or Treasure Island, but has anyone developed in a way you didn’t expect?

Steinberg: Eleanor’s arc has been somewhat surprising. She’s part of Nassau, but she also has this desire to move on from it. She’s playing into a rigged game as much as anyone on the show. Even in Season 3, we see there’s this process she’s experiencing: Her ability to function as though gender doesn’t matter goes away. We knew this was a show about civilization entering back into a lawless frontier, and she’s kind of become the face of that. We didn’t expect that.

Levine: We constantly want you to be able to find empathy on both sides of the argument. That’s always been a sort of stated goal. For example, many people think what Eleanor did to Vane is unforgivable, but at a certain point — he killed her dad.

The Season 3 finale also includes the most traditional “pirate” elements the show has ever had, between buried treasure, black spots, and Long John Silver. Did you wait to weave them into the story for maximum impact?

Steinberg: There was, from early on, a desire to strip it of some of the more fantastical campfire elements that have long been part of pirate narratives. In Season 4, the idea of storytelling and narrative come into play a lot more. It’s so wrapped up in the book Treasure Island. There’s a lot of story all the way back to Season 2 that’s building on the idea of story within the show. More than anything else, it’s really a story about story.

It would be silly to ask if you have a favorite episode or character, but is there one where you’ve been the most pleasantly surprised by how it turned out?

Levine: I was very pleased with 307 and Silver’s arc. It was earned, it was a long time coming, and it started to harmonize everything on his story.

Steinberg: It’s the ones you would think – Silver’s evolution has been dramatic, but on some level that was baked into the premise. We fired off the flare four years ago, and hoped this character who is kind of a goofball would eventually be this frightening pirate. For some of the other ones, the Rackham and Bonny dynamic is as much fun for us as it is for the audience.

How do you balance the historical — or Treasure Island influenced — demands of the narrative with your own creative impulses?

Steinberg: Sometimes history is helpful. We knew about the fire ships from the day we pitched the show. Pretty early on, we fell madly in love with Rackham and Bonny. We knew what their endgame would be in Season 2 or definitely Season 3. In terms of Anne Bonny’s history being unclear, it makes it a little easier for us to be writing fan fiction for them.

The narrative is constantly in flux, but there are pieces of it that we know are coming. You know what happened, but you don’t know why and how it might be interpreted, which gives us room. But sometimes I can hear Robert Louis Stevenson laughing at us from the future.

By this point, the action is big enough and the momentum is strong enough that if you wanted to watch a show about pirates doing things, you can — but hopefully we’re saying something meaningful too.

And I’m sure you get this a lot, but will Mary Read ever make an appearance?

Levine: There are people we’d love to introduce, but their spots are taken by other characters. Max and Eleanor are the two characters with the biggest footprint who are our constructs. The room is getting crowded.

Even though you have an ensemble cast, each season tends to linger on certain characters in particular. Which characters will have major arcs in Season 4?

Steinberg: Silver is explored in a way and to a degree that — even by Season 3 standards — is more intense. Luke Arnold has really been impressive. Madi is another character we knew was going to be relevant, but becomes pretty relevant pretty quickly.

How do your roles as dual showrunners work in terms of checks and balances for each other? Do you often shoot down each other’s ideas?

Steinberg: We always say to the writers, “Prepare to have 90 percent of your ideas thrown away.” The body count is high no matter what. There are so many ideas that have been discarded from five years ago sitting in my basement trying to figure out this pilot until now.

Levine: When we both see something, we’re pretty sure it’s working. The show is massive, there always has to be someone at the top where the buck stops. The show wouldn’t be possible without Jonathan.

Steinberg: There are two things we’ve found a way to inhabit simultaneously: As budget goes up, your creative freedom goes down. But we’ve gotten enormous freedom from Starz — not a lot of people would probably give us the go-ahead when we said we wanted to do a season about death.

Black Sails is the best show I’ve seen that sticks with minor characters: Details like Idelle and Featherstone’s interactions or Jacob Garrett coming back this season really makes it feel like a self-contained world. Did you plan these smaller aspects of the story in advance?

Steinberg: We’re really rough on just throwing a new character into a scene – it’s a little bit of “who gives a shit?” And we have a great pool of talent in South Africa. You have to be precious with your resources. We really liked Aidan [Whytock]. Some people like you have picked up on how we’ve built up Idelle — it was back in Season 2, when she’s talking about Featherstone, that we realized she could be funny. Craig [Jackson] auditioned for Rackham. He was the only one we had in mind for Featherstone.

When you have time to watch TV, what other shows do you enjoy?

Levine: I have two young kids, so I enjoy a lot of comedies at this point. I watch Broad City, The Americans, Halt and Catch Fire, and this Swedish show called Borgen.

Steinberg: Mostly Key and Peele reruns, to be honest. The last show we both really enjoyed was Wolf Hall.

What are you most looking forward to exploring in Season 4 of Black Sails?

Steinberg: The Flint and Silver relationship dynamic, that, by the end of Season 3, has now reached a new state. And Blackbeard and Long John Silver are the two most-well known pirates for a reason — we’ll get to see more of that.