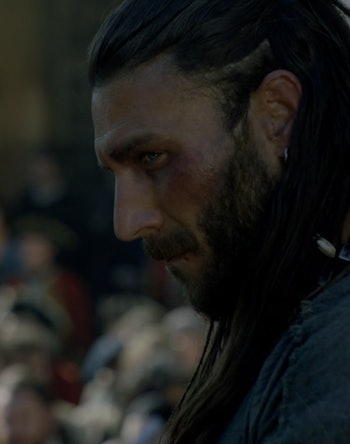 We once said Charles Vane was the heart of Black Sails, and after the gut-punch of “XXVII,” that heart has stopped. Charles Vane died as he lived: Answering to nobody, living on his own terms, and going out with the most badass last words possible: “Get on with it, motherfucker.”

In the hands of a lesser actor, Charles Vane could have been an archetype — “the wild card” or “the crazy one” — but Zach McGowan gave him depth, complexity, and heart. Nobody else could have brought him to life so vibrantly. Like Nassau itself, Vane was a cocktail of contradictions: Brutal yet compassionate, crass and thoughtful, reckless but idealistic. As Billy said last episode, he was the best of them all. Black Sails will be a different show without him.

Zach McGowan spoke to Inverse about how he actually thought Vane would die sooner, that intense scene with Eleanor, what he was thinking as he shook his head at Billy, what he kept from the set, Vane’s philosophy on violence, and more.

How long have you known this was coming?

I always knew how he ended. I thought it was going to come a lot sooner than it came. I ended up getting three seasons out of it when I thought maybe I was going to do one.

When did you find out for sure it would be Season 3?

I talked to [showrunners] Jon and Robert about it just before Christmas in 2014. Jon and them threw it at me, “We’re thinking of this, what do you think?” almost like they were waiting for me to say, “Please don’t kill me!” And I was like, “Just don’t let him apologize. He’s not sorry. Let’s get on with this shit!” That was the tone that I brought to it, and I think that was the same kind of tone we ended up getting there.

What was the last scene you shot?

You know that — the only reason they let me on the horse is because they didn’t need me anymore! I was pushing to do that horse stuff, and they were like, “No one’s doing that! You can’t!” After we finished episode nine, we were shooting the horse sequence. I said, “I’ll get in costume and I’ll be here. If you guys want to let me on, then let me on —if you don’t, then I won’t.”

Our producer said, “You’re aware that this is a horse and there are many horses behind you?” I said, “Yes!” I felt like that sequence would just be bullshit if we were all in masks and no one was riding. So I did that, and it was the last thing I shot.

Since you do your own stunts, would you say that was your favorite one in Season 3? The horses?

I really loved it, because I’m from New York, and there aren’t a lot of horses in New York. I had never ridden horses before. I have a big pit bull, so I’m used to animals. And I ride motorcycles, so it’s actually not that different as far as the feeling of flying fast. So preparing for that was my favorite — although they also let me do a lot of sword work in Season 3.

I got to do the fight in town when everyone’s trying to collect the reward, and then I fought the Spaniards, which were both very fun sequences. They didn’t let me pull the sword out all that much until then.

What are your thoughts on the scene where Vane stands on the gallows and shakes his head at Billy, discouraging his rescue?

I had a lot of talks with Jon and Robert about it all. Early on in Season 1, I said, “Charles Vane is not afraid to die. He’s looking for the right person who’s going to do it.” They were like, “What do you mean?” I said, “I feel like he’s someone who doesn’t really understand why he’s alive through all the situations he’s been in.” He should have been dead so many times that he’s not afraid of it. He’s basically on borrowed time the whole time you’re seeing him.

We spent a lot of time down in South Africa shooting, and I have small kids, so there was also an aspect of me not wanting to spend seven months a year down in South Africa. So partially too, I was maybe pitching it a little — “When are we going to do it?” I felt like he was the right guy to do the first time you see a pirate get hung; I felt like it would be stronger with Vane than anyone else.

We always said it’s a tragedy no matter what — trying to get people to love pirates and root for them to win a war that they didn’t win. The pirates did not maintain control of the Bahamas for very long. I also felt like, amongst the actors on the show, there are so many of us whose real pirates eventually get hung or killed. And like how I try to approach everything, I was like, “I want to go first!” What Vane was thinking was kind of the same: That he was going to go, and he wasn’t going to plead.

He’s always had an interesting approach to death and violence.

It’s like what we did with the Spaniard fight. Vane doesn’t want to kill someone he doesn’t have to kill, necessarily. He’s fighting the Spaniard and he wins — and the Spaniard says, “Please, no.” And he’s like “Okay. You’re on the ground, you’re no longer a threat. You want a drink? Here’s a drink.”

That’s different than the way the British kill — they don’t have to hang someone, they’re making a point. They’re saying you’re a strong person but they’re stronger. They want to hang him while he’s in chains. I don’t think Charles would ever kill someone who’s in chains. He would be like, “They’re in chains; why would I kill them?” He was thinking, more than anything, that he could show that these people are wrong. That’s why he’s shaking his head.

“Let them do it, let everyone see how brutal civilization really is,” because civilization is always calling the pirates brutal. The first time you see the Red Coats, you realize the force against them is so great. It’s the British Empire. What he was thinking was, “As one man, you can’t fight an empire, but maybe if the people see how fucked up these people are — let them kill me. Don’t try to stop this.”

So in the scene in the cell with Eleanor — he’s baiting her to do it?

He wants to show her that whatever she’s saying about him being a bad person —she’s worse. She’s willing to punch a person in chains. The way I always look at it is, the fight ends when someone’s on the ground.

You don’t hit people who are down; you don’t hit people who are in chains. If someone wants to assault you, you handle it until they’re no longer assaulting you. If that means you have to kill them in a fight, you kill them in a fight. If you don’t, you don’t. He was provoking her. She’s always calling Vane an animal. He’s like, “You’re the animal! You’re a lying, backstabbing person who sends other people to do your dirty work.”

He was not going to let her win the argument; not let her say her dad was some sort of saint who didn’t deserve to die. Vane thought he was a coward who only cared about himself. That was how he felt about Richard Guthrie and feels about the so-called “lords” of the world at that time. He thinks it’s all bullshit.

He wants to say, “You’re awful and your father was awful.” He also wanted to say, “If you weren’t so awful, we could have had a life. A real life, and a family, and all those things. But you just constantly lie and stab the people you supposedly love.”

He’s always had a morality that she ignores.

I always wondered, does Vane know that her and Woodes are together? Yeah, he probably does, because how the hell did she get back from London? She must have struck a deal with these people. She’ll do anything to survive regardless of whatever morality is involved. And he’s not that way. He’s like, “Alright, cool, if you want to kill me, kill me. A lot of people have tried. If you want to show how brutal your society is, then show it.”

I’ve talked about it with people who are like “but Vane killed fucking Ned Low and put his head on a pike!” And I say, “But he didn’t kill Ned Low’s crew.” Ned started the fight. In that situation, Vane would have let Ned walk out if he didn’t want to fight. But he did, so he ended up with his head on a pike.

Did you keep anything from the set or your costume?

I have my sword, it’s above my fireplace at home.

What will you miss most about playing Vane?

Mostly what I’ll miss are my friends on the show. The guys and girls I hang out with there and the stunt team. Although, a bunch of them are working with me right now [on my next project]. And I’ll miss the brilliant writing. This show does such a great job justifying the violence and all that. As far as missing Vane — something tells me I’ll get to play Vane for a long time and they’ll call him different names. I can be Vane whenever I want; I’ve got Vane right in my pocket.