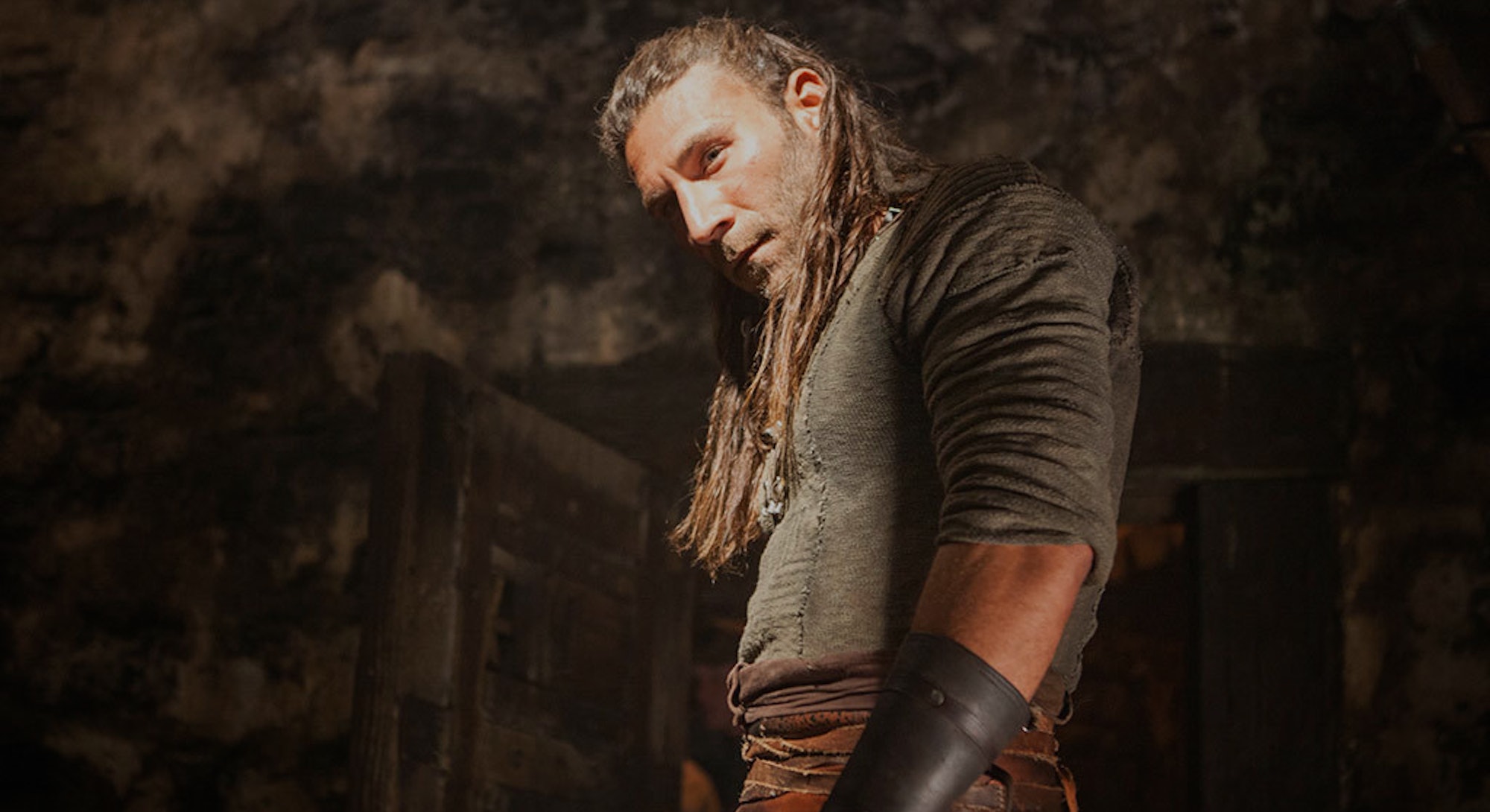 Charles Vane is a savage, a madman, an animal: These are the most common character reviews tossed his way by friends and enemies alike on Black Sails. Even among fans of the political pirate drama — and here’s a rundown of the show if you’re not one — he’s the most polarizing captain. You can’t help but respect Flint for his cunning; Rackham for his pizazz. Vane, with his tendency to solve all problems with sudden violence, has provoked as many eye-rolls as captivating character beats. But looking at his arc as a whole, he might just be an unlikely candidate for the show’s moral center. Zach McGowan, who plays Vane, hopped on the phone with Inverse to help illuminate.

At the beginning of the show, our first glimpses of Vane include watching him murder a man and hit a woman — albeit one who hit him first. He’s a guy with a strong presence, and it’s not a fluffy one. Zach McGowan is not the kind of cookie-cutter actor you can confuse with any others: With feline eyes, a barfight nose, and a curiously leonine bone structure, he has one of the most striking looks on TV. His face, his wild hair, the prowling way he moves, and the growling way he speaks (“I had been cultivating this voice for years,” says McGowan) all contribute to the impression that Charles Vane is more predatory animal than man.

This has been both a blessing and a curse for him: In Season 1, viewers either thought he was the Man or they found him lacking in depth. Let’s get one thing straight: His Season 1 lumberjack death jaunt was not the show’s strongest plotline for the simple reason that Black Sails is a period drama operating in gritty realism — give or take a few fudged timelines and characters — which makes grave-rising inconsistent with its world.

Luckily, the much-improved Season 2 figured out how to better explore Vane without taking a detour into an episode of True Blood. Unshackled from the yoke of a so-so subplot, Vane had time to shine — and to establish, in increasingly epic ways, that you do not fuck with Charles Vane.

But most importantly, Vane’s badass moments aren’t merely for the sake of looking cool. It’s the sentiment behind his actions that makes him emerge as the show’s dark horse: The character you initially might not have thought much of who sneaks up on you. Black Sails is a cut above other adventure shows because of how it layers character development seamlessly into its action sequences. Each of Vane’s big moments has an emotional core that deepens his character — while at the same time making you want to shout a “fuck yeah!” at the screen. In that regard, Vane embodies the show as a whole: underdeveloped, if promising, in Season 1; jaw-droppingly great in Season 2.

“The story has come to that place where he is now the person I’ve always seen him as,” says McGowan, about Vane’s place in the upcoming third season. “In the first couple seasons, I saw him as misunderstood. I was like, ‘Everyone thinks I’m a bad guy!’ I don’t think he’s a bad guy. Is he a violent person? Yes. But is he relishing in violence? Is he tying someone to a chair and torturing them?”

McGowan adds, “It’s a question of ‘Is there ever a time when violence is needed?’ People have different responses to that. I have friends who are pacifists; I have friends who believe that if someone punches you, you have a responsibility to react. Luckily, because we live in a society that’s mostly peaceful, we don’t have to think about that all that often. But for people like Charles, these are things they’re constantly brushing against. Given his brutal upbringing, I actually find him to be a very honorable person. He’s not someone who misleads others. He rarely says something he doesn’t believe. “

One of the only exceptions to that rule is when Vane beheads Ned Low in the third episode of Season 2. The whole sequence, from their tense banter to the I Angered Charles Vane sign on the beach, is spectacularly fun to watch. But beneath the superficial “Charles Vane Is a Boss” level, that moment stands out because it reveals to characters and audience alike that anyone assuming he’s just a mindless brute does so at their own peril. It also shows how deep his unlikely romantic streak runs, because even if he denies it to Eleanor, Low’s head on a pike is basically Vane’s version of a diamond ring. Ah, young love.

Referring to the scene when Vane tells Eleanor he didn’t kill Low for her, McGowan says: “I said to the writers, ‘That’s the first time you’ve asked me to lie!’ They asked, ‘What do you mean?’ And I said, ‘You always write such truthful dialogue for Charles.’ It’s not like he’s trying to connive his way through a situation. He’s usually going, ‘This is how I feel about that,’ and someone tries to fight him and he ends up winning. Eleanor kisses him because she knows it’s a lie: He totally just killed a man because he was trying to kill the girl he loved. I think there’s a romance to that.”

That romance, as we know, is short-lived, as Vane’s second crucial moment comes a few episodes later when Eleanor betrays him. In retaliation, Vane murders her father and pins his breakup note-cum-manifesto to his dead body (ah, young love). While serving as a chilling game-changer and another “Charles Vane Is a Boss” moment, it also demonstrates the strength of his principles. It shows that “You Do Not Fuck With Charles Vane” applies even to those he loves — and viewers and Eleanor alike vastly misjudged his weakness for her. But more importantly, as that gravelly voice narrates the note, it reveals that Charles Vane is more a man of ideas than we’d have ever guessed and paves the way for the finale.

At the end of Season 2, when Vane swoops in as Flint’s most unlikely rescuer, it could have come across as the writers fudging an improbable character motive for the convenience of the plot because they wrote themselves into a corner. On a lesser show, it would have. It’s entirely thanks to Vane that that spectacular finale worked. His decision to do an about-face and rescue the man he came to attack is surprising yet entirely in line with his character. By the end of the episode, there’s no doubt about it: Charles Vane — the brute, the savage, the animal — is the purest and most idealistic character on Black Sails.

McGowan says of Season 2’s ending, “I think the audience starts catching up with what he’s really been thinking about all this time. They love to cut to Vane and the epic music, like he’s going to kill everyone. I think the ‘savagery’ and ‘beast’ of Charles is his willingness to match whatever level of violence anyone presents to him. But if you go back and ask yourself who Vane has killed so far and what they have represented — in a world without law, someone has to keep people in check. I think that’s something that Charles has been doing instinctively. Sometimes he’s been at odds with people like Flint and sometimes he’s realized that maybe Flint is looking for a greater good. Season 3, for Charles, is about this greater good he’s fighting for and whether or not that greater good is what he wanted.”

Every other character bends to accommodate the direction the wind is blowing, and Vane’s comparatively straightforward nature might make him seem simple —especially in comparison to Flint’s complex, fluid identity — but he sticks to his ideals and weathers the storm. More than anyone else, it’s Vane who emerges from the wreckage unscathed and unchanged, and it’s Vane who embodies the pirate attitude in the purest way: freedom, nonconformity, honesty among thieves, making his own fortune, and standing up to anyone who crosses him. And if the show doesn’t tweak history, it’s Vane who ultimately will stand by his beliefs until the very end, caving to no one.

“As much as the pirates and cowboys of American history are kind of the beginnings of America,” says McGowan, “I feel like it started with the pirate rebellion in the Caribbean. The first time me and [showrunner] John Steinberg spoke about the role, he asked me who I thought Charles Vane was. I said, ‘He’s the first American.’”

Flint might be the soul of Black Sails, while Silver is the brains. Billy, Rackham, and Anne might provide entertainment and rich character moments in equal measures. But Vane is the show’s beating heart. He’s bloody, he’s messy, but he’s vital and packs a hell of a wallop. His character arc will ultimately stand as the final word on the pirates of Nassau and the show itself. Of the moment, in the end, that Vane will inevitably meet the noose with a straight spine and his head held high, McGowan says, “I look forward to that day.”

In the show’s very first episode, Vane tells Eleanor, “Whatever future this place has left, I’m it.” It came across as tough-guy posturing then — but like the man himself, there’s more to it beneath the surface than what meets the eye.