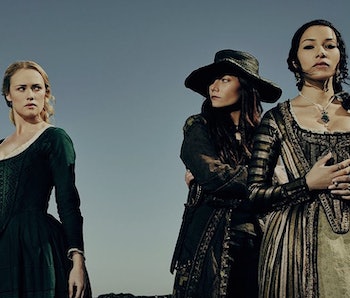 In 2015 the ignominious title of most criminally underrated show goes to, you guessed, Black Sails. Part Game of Thrones, part Vikings, part R-rated Pirates of the Caribbean minus the squid-people nonsense, it’s simultaneously a series of character studies and an epic, gritty, swashbuckling political drama. The first two episodes of Season 3 have been made available to critics, so here’s a spoiler-free rundown (so long as you’re caught up on Season 2) of what you can expect when you return to Nassau on January 23rd.

Anybody who watched Season 2’s epic conclusion knows Flint is not a cheerful guy right now. His friend-with-benefits / sort-of-partner Miranda Barlow is dead and his dreams of reconciliation with the British are kaput. He’s no longer conflicted about his identity as James McGraw versus Captain Flint; he’s past the point of no return. He doesn’t seem to even be thinking about Nassau’s future anymore and Thomas Hamilton’s idealistic vision; the goals he’s held onto for so long. He simply wants to wage a war against the entire civilized world, heedless of who he has to mow down in his path. He’s not exactly abiding by Marcus Aurelius’ philosophy any longer. We haven’t seen Flint fully unleashed before — aside from a taste at the end of Season 2 — but Toby Stephens more than delivers. Hold onto your hats, kids. Flint is going full Flint.

Charles Vane is the kind of guy whose name you just can’t help putting “fucking” in, though its inflection shifts as the story progresses: In Season 1, he was Charles Fucking Vane: a mixture of villainous and downright pathetic, once Eleanor stripped him of his ship and crew. At the beginning of Season 2, he was still Charles Fucking Vane because he just kept fucking up everyone else’s plans and didn’t seem to think things through. But midway through Season 2, when he beheaded Ned Low, got screwed over by the woman he loved, and Apocalypse Now’ed his way to Charles Town, it was almost impossible not to be onboard with him even though he was — yet again — going to mess with Flint’s plans.

Once he got to Flint’s ship, he proved he’s got the capacity to be more thoughtful than he seems, because he listened to reason for once and instead of stealing the ship and leaving Flint to hang, he turned around and rescued his former enemy. Because he’s Charles. Fucking. Vane.

Season 3 looks like it will do much the same for him as Season 2 did for Flint: It will peel away the layers and reveal the man behind the legend. Let’s be real, his Season 1 journey to Lumberjack Island was one of those Season 1 subplots where it felt like the writers were still experimenting, to varying degrees of success. That bizarre storyline didn’t really tell us anything substantial about Vane’s past. Season 3 reveals more about his psyche as a former slave in a far more effective manner, and the introduction of Blackbeard sheds more light on his early life and his attachment to Eleanor. Just two episodes in, it’s apparent that Charles Vane is going to have a hell of a season. Also he has a beard now, because why not. Charles Fucking Vane can do what he wants.

John Silver Being a Real Pirate

Like Vane, John Silver has gone from being more of an eye-rolling hindrance than a character to being one of the most essential centers on the show. The selfish, happy-go-lucky fratboy-type from Season 1 is long gone. In Season 3, he looks more like a pirate (Season 3 seems to be Beard Season); he acts more like a pirate, and thanks to his peg leg, walks more like a pirate. The Season 3 trailer shows him curb-stomping a guy with his peg leg — cheerful, irreverent John Silver curb-stomping a guy! As Flint’s sole voice of reason, he now has a rather thankless job, and it might take all his considerable wits to avoid Gates’s fate. The jury is still out on whether this will be the season where we’ll find out why, in Treasure Island, he’s the only man Flint ever feared. But John Silver is now far closer to being the pirate of legend than the weasel he was at the beginning of the show, and his character evolution is only getting more compelling.

Eleanor Between a Rock and a Hard Place

Eleanor has had the most dramatic fall, from the Queen of Thieves to a condemned prisoner. Her arc is arguably the most tragic (besides Flint’s) because her road to hell really has been paved with good intentions. In Season 1, she screwed Vane over on a snap judgement and an impulsive, emotional reaction. In Season 2, she tried to learn her lesson and to act with cold logic. She still screwed him over, but ironically, it was because she put her emotions aside: She thought it was ultimately for the greater good. Now all of her plans have backfired, her father is dead, her former lover hates her, and she’s cast out of the only homeland she’s ever known.

Saying much about her journey in Season 3 will reveal too much, but her moral quandaries are only growing. You thought choosing between Nassau’s future and her love for Vane was a hard decision in Season 2? You haven’t seen anything yet. Eleanor has never been more, as she would say, fucked — or more interesting.

Like every other character on this show, Blackbeard has the potential to be a disaster if he isn’t done well: After all, he’s the most legendary, feared pirate in history. If he wasn’t cast well or if it seemed like the writers or the actor was trying too hard, any badassery would immediately vanish.

Luckily, Ray Stevenson couldn’t be more perfect for the role. He fills Blackbeard with a stone-cold quiet menace belied by an almost gentlemanly demeanor. Everything about him feels like an old-school pirate; one that even Rackham, Bonny, and Vane are cowed by. It’s unclear whose side he’s going to be on and whether he’ll cause trouble — but his screen presence is so dynamic that he’ll make it impossible, once again, to pick sides. Just when you thought Flint and Vane were allied and you’d no longer have to feel conflicted about who to root for, Blackbeard will stir things up again.

As for Anne Bonny, Jack Rackham, and Max, they’re still kicking, but the first two episodes work as pot-stirrers for their plotlines in the show’s typical slow-burn fashion. It’s not clear yet where they’re going, but with the primary characters at full simmer so early in the season, it’s looking like Season 3 will be the best yet.