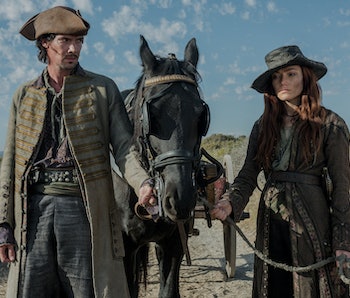 Black Sails is a show full of scheming, reversals of fortune, and general skullduggery. Each week, we’ll break down the conniving, betraying, ass-kicking, and unexpected alliances as they emerge. Let’s dive into Season 3 Episode 5, “XXIII.”

If Vane is at his most compelling when he’s burning the world down, Flint is at his when he’s convincing others to do it for him. We haven’t seen a proper Flint speech since he incited his crew to take on that storm. But just when you think his spirit is broken and Silver will now carry the speech torch, Flint gives his most magnetic soliloquy yet. His plan to take back Nassau is as improbable as it is epic, but the very fact that he can convince everyone to follow a plan with so many “ifs” showcases his power.

With Flint’s macabre visions, his intensity, and language about claiming what’s his, it’s downright Macbethian. Between that, his relentless pursuit of power, his murder of his friend along the way, and his Lady dying from their schemes, all we need is a lament about tomorrow. He even resembles the most recent Macbeth.

Who is utterly screwed?

Rackham is his own worst enemy. He’s almost as crafty as Silver, but Silver succeeds because he gives zero fucks what people think of him. Rackham inevitably fails because he does. As Anne says, they won the game! They gloriously screwed over Nassau’s new establishment without even trying, taking their money on a leisurely stroll while Rogers had a conniption back home. But because his ego keeps him from relinquishing this idea of legacy, Rackham can’t leave well enough alone. Ironically, that will be his downfall, but it will also be why we are still saying his name.

The real Anne Bonny’s last words to Jack Rackham were insanely cold. So far, it’s seemed like the show might not go there — it prefers to smelt history in a melting pot of fact and fiction. But Anne’s been getting savvier. Let’s not forget, she’s the reason they even have the gold. If Rackham keeps getting in his own way, why should she go down with that ship?

Pirate-Gangster is the new Buddy-Cop

This episode is about duality: Flint and Mr. Scott outright discuss it; the slain Spaniard tells Vane he could have been in his place; Silver says, “It bothers me” about Flint’s plan to sacrifice himself (echoing Rackham’s words about Vane’s departure a few episodes ago); Eleanor and Max verbally spar over Max’s place in Eleanor’s former chair. Even the cinematography casts Flint’s face half in light, half in shadow during his speech.

Like this episode, every Black Sails viewer has a dual identity: One that watches it for its elegant characterization and subversive storytelling; the other that watches to shout “fuck yeah!” whenever pirates wrestle sharks or blow up redneck colonial towns. So far, Season 3 has mostly appealed to the former. But Flint’s final line (“Now we go find Charles Vane”) pivots to the latter. Because there’s not a single Black Sails viewer who didn’t “fuck yeah!” the entire Season 2 finale. If you tell me you didn’t, I don’t believe you.

Fan service — in which a show winkingly acknowledges its awareness of what you want — is a tricky thing. When shows pander to it too much, they become self-indulgent. When they use it to tease they risk audience ire. Black Sails knows how much you want to see Flint and Vane kick ass together again. But Black Sails slow-burn plotting makes the reward infinitely more satisfying than instant gratification would. Other shows, take note: This is how to handle hat-tips to fans without impeding storytelling.

Much like Vane, John Silver embodies how far Black Sails has come over the course of three seasons. In Season 1, the writing gave him a hard sell as a charmer, with lines like “I’m a hard man not to like” — ignoring the fact that charm is better shown than told. But as Black Sails matured, it endeared itself more suavely. Silver’s evolution has been immensely satisfying, as his progress tracks that of the show as a whole.

His confession that Flint’s death would upset him is actually charming. Not because he’s trying to charm, but because it’s an organic moment in which both character and audience are delighted by how he’s developed. When he tells Flint, “I understand the allure of ensuring that no one will ever think you the villain you fear you are,” the Silver of previous seasons would have accompanied that with an I’ve got you all figured out! smirk. This Silver’s only agenda is commiseration.

The fact that it pushes Flint into that speech shows how Silver’s persuasive powers are amplified when he’s being genuine, rather than slathering on charm. His guileless surprise at his own regard for Flint cements it: It might not have been true initially, but he’s one of the most charming characters on TV now. Not in a slick way, but a real way. He’s earned it.

If Flint is Macbeth, Vane is Hamlet: He’s got daddy issues, lady issues, he’s dilly-dallying about the right path, and he pauses for a chat about mortality. Showing mercy to a dying man initially doesn’t seem Vane-like, especially when it’s a man he cut down. But Vane’s secret is that beneath his snarling ferocity and recreational beheading, he’s kind of a nice guy — a fact that always surfaces when we least expect it. He’s also fair to those he respects, which he establishes here with his “you fought well” comment.

Not only does their interlude continue this season’s dive into Vane’s thoughtful side, but it also shows how masterfully Black Sails weaves its disparate plot lines together. Initially, Vane and Blackbeard’s storyline appears isolated and Vane’s Spanish philosophizing — while a nice character moment — seems slightly random. But by the episode’s end, it proves to be the connective thread to every plot line. It underscores how nothing is extraneous: Whenever we wonder why Black Sails is doing something, it’s answered a few scenes later, in ways more diabolically clever than anything we’d guess.