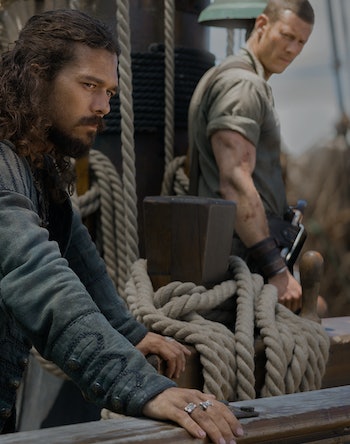 John Silver might be the most famous fictional pirate, but the young Silver on Black Sails, portrayed by Luke Arnold, never even wanted to be one. Over the course of the show, he has been a charmer, a disgraced thief, a con man, a coward, a hero, a nuisance, a questionable cook, a storyteller, a beloved quartermaster, and a famed lower-limb amputee. He’s had one of the most compelling arcs on recent TV, and he singlehandedly shows how to get a smart character right. “I feel like like I play a different character every season,” Luke Arnold tells Inverse.

At the beginning of the show, Silver’s entrance into the pirate world is accidental. He weasels his way onto Captain Flint’s crew to save his own hide when they attack his merchant ship. He’s as far from the John Silver of legend as can be: He’s not a fighter; he doesn’t even like the sea. With a mop of curls and a mischievous smile, the John Silver of Season 1 looks more like an 18th century boy band member than a formidable motherfucker whom even stone-cold Captain Flint ends up fearing.

“Every character is a product of their circumstances,” Arnold says. “Silver is a coward and a liar in the first two seasons, but there was an honesty to it. He never pretended to be anything but than the man he was: a man looking out for number one. Some people might have taken a dislike to him because of that. But that’s what’s interesting about letting the audience into Silver’s mindset this season.”

By the beginning of Season 2 — when Silver and Flint embark on a buddy-cop expedition to steal a Spanish warship using nothing but their wits — even Silver-skeptic viewers were forced to rethink him. “His relationship with Flint has been one of the absolute joys of the show,” Arnold says. “That first episode of Season 2 was one of the most fun; the adventure story of Flint and Silver teaming up. Toby Stephens is just such a great actor and gets so absorbed in his role; I’ve become a better actor every time we have a scene.”

Though Flint initially considers Silver useless for being an inexperienced fighter, it’s Silver’s quick thinking that saves them when the situation goes south. Silver is arguably the smartest character on Black Sails, but he doesn’t build mind-palaces or give crazy-eyes to indicate his brilliance. Too often, shows depicting “smart” characters tend towards cartoonishly superhuman hyper-intelligence. Like the show itself, Silver simply relies on one thing: The power of good storytelling.

In Season 2, Mr. Scott observes Silver’s rhetorical skills and comments, “At the moment, he’s using it to help Flint. God help us if he ever realizes what else he could use it to accomplish.” As Silver learns, harnessing his inner Scheherazade enables him to ascend the ranks of Flint’s crew and the brutal world of Black Sails. But he doesn’t succeed overnight; his Season 2 scheme to win the crew’s regard through storytelling initially earns him more punches than praise. No part of his development cuts corners or feels unearned.

“At first, the changes are subtle, but they become more dramatic as we’ve gone on,” Arnold says. “The fun at the beginning was taking him as far from the Long John Silver of Treasure Island as possible. I’m enjoying playing him more the further along we get down that line.”

Because Black Sails excels at getting you to embrace morally grey characters, by the time Silver sacrifices his leg to stall when his crew is threatened — literally taking one for the team — and is subsequently appointed as Flint’s right-hand man, even the staunchest Silver skeptic has to concede. He might not kick ass and take names like Charles Vane, but he’s got his own brand of strength.

Viewers with a cursory knowledge of Treasure Island weren’t surprised that Silver lost a leg, but Arnold says he didn’t know exactly when Black Sails would go there until shortly before the Season 2 finale. “I’d talked with [showrunner] John Steinberg about when it could happen. Suddenly it just felt right. This change we were starting to see in Season 2 — him starting to actually become a part of this crew; them starting to respect him — it seemed like the right catalyst for him to lose that leg and start the next part of his journey.”

By Season 3, the Silver of Season 1 would hardly recognize himself. He’s the second-highest position on a crew that used to scorn him, his clean shaven look is forsaken, and he no longer lurks and skulks; his movements are accompanied by the authoritative thump of his new wooden leg. There’s no question that he’s a real pirate now — but the journey wouldn’t have been nearly as meaningful if Silver had been this guy from the beginning.

“He never relied on anyone else, and never wanted anyone to rely on him,” says Arnold. “This new role he’s taken as quartermaster means that he now has responsibility over the lives of the men — but by buying into that, he’s now part of that crew. He has some confidence and optimism about being able to take on this role.”

Arnold adds of Silver’s path in Season 3: “This slow unraveling — that bit of doubt he has about himself — happens from the moment Flint manages to get into his head in the first episode. In the second episode when Muldoon dies, it keeps breaking down any confidence he has: Not only that he can be a full man now that his leg is gone, but also that he’d be able to be strong enough to lead this crew and stand up to Flint.”

Silver’s curious mixture of doubt and his bravado culminates in the third episode of Season 3, when he climbs into a rowboat with Flint — who he’s just watched shoot two men in cold blood — and calmly admits to stealing gold behind his back.

“I think that only came about in that moment because it was absolute desperation,” Arnold says. “Before that, it would have been one of Silver’s secrets. But at that point, there was still potential for staring death in the face, so there wasn’t much harm in throwing that information out and letting Flint react to it. It was his last pitch to get respect and understanding from this guy who was driving him to the brink.”

Arnold adds that filming the shark wrestling following that moment was no picnic. “Fighting that shark was tough,” he says. “It was a big rubber thing that was slowly filling up with water and getting heavier every take. I had one leg on and we both hadn’t been eating properly for weeks, to try to look skinny enough.”

Silver’s confession to Flint is both a mad gamble and a point of pride for him to acknowledge him as an equal. “Silver was never a character that had a lot of ego,” Arnold says. “He didn’t care what anyone thought of him. But there’s a pride in him that’s developing.”

Arnold attributes that pride to learning to navigate the world as an invalid. “He’s a guy who’s always had one leg out the door, and then they cut it off. Some part of him is deciding, ‘I’m not going to cry about it, I’m going to choose a life that makes sense for me and that’s to be part of this crew, with these men. Because what I lost in the leg, I gained in respect.’”

About what’s next for Silver? “There isn’t an episode this season that doesn’t have some massive moment,” Arnold says. “You go from one day of doing crazy fights and then the next day, having two people in a room with some of the best dialogue in television. But Episode 7 is a big turning point for Silver. If I decide to retire as an actor after this show, having done the scenes in that, I’m going to be happy.”