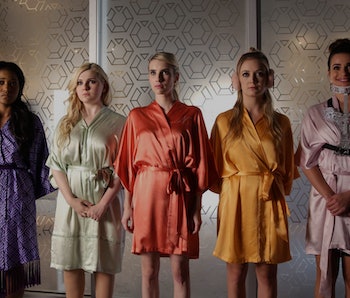 Regular Inverse readers know that Scream Queens is one of Inverse’s favorite shows — along with Wicked City, Game of Thrones, The Walking Dead, Marvel shows, and The Leftovers. But that’s why it’s with the utmost disappointment that we acknowledge Scream Queens might be demoted from this exclusive list if it doesn’t get its act together.

In its honeymoon phase, Scream Queens could do no wrong. Its first four episodes were delightfully ridiculous, featuring a cast of characters as despicable yet fun to watch as the gang on It’s Always Sunny in Philadelphia and a horror-comedy pastiche as bloody yet playful as Ash vs Evil Dead. The golden player was Chad Radwell, the over-the-top WASP-y frat boy who never failed to liven up a scene.

But then something terrible happened: like all Ryan Murphy shows, the writing started meandering. The killer and Chad Radwell both got sidelined in favor of sorority politics and characters like Boring Terrible Hat Girl, whose name I refuse to learn.

Terrible Hat Girl is the kind of character who appears on every self-serious teen drama, and she has no business stealing screentime that could be otherwise given to Chad Radwell or Jamie Lee Curtis’s Dean Munsch. Do the writers think we actually watch this show for characters who aren’t over-the-top, or that we watch it because we’re invested in their fates? Maybe they’re just pandering to a subset of fans, but this reveals a lack of awareness.

The Scream Queens writers further illustrated their lack of foresight with how they handled the Boone — also known as Dead Gay Boone —plot line. Played by a Jonas, he was one of the more surprisingly enjoyable characters, but he vanished from the show after faking his death in the pilot. Then, after meandering and seemingly forgetting about the red-devil killer storyline for a stretch of several episodes, the show brought him back — only to make it abundantly clear they had absolutely no idea what to do with him.

He briefly gave the show some juice with a hilariously dumb Joaquin Phoenix disguise and a delightfully dumber ghost gag. But just when it seemed like the writers were getting back on track with ridiculous horror-comedy and plot lines that weren’t abandoned, they hastily killed him off.

What was the point of briefly bringing him back — or even delaying his death — if that was his endgame? Scream Queens is not a show we watch for its dazzling intelligence, but even in silly escapist fare, it’s not too much to ask for a show to even vaguely gesture at having a sense of direction. A show doesn’t need to be an intense prestige drama in order to respect its audience’s intelligence — and we’re not holding Scream Queens to the same standards as prestige dramas. But even so, a show has to have some standards. Their handling of Boone was the straw that revealed a semblance of purpose and direction might, in fact, be too much to ask of a Ryan Murphy show.

As we’re only three episodes away from the end, we’ll keep watching Scream Queens, but unless it can get its act together; at this point, its dangerously close to being an inertia watch.