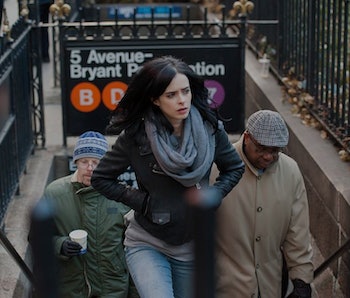 In a telling scene in Iron Man 3, Tony Stark suffers panic attacks, which he eventually calls “anxiety attacks”, as a result of his near-death experience in The Avengers. One of Stark’s companions even mentions PTSD, but the film does not focus on this possibility — Stark engineers his own remedy, building himself a better iron suit and fighting another villain as a distraction from his inner turmoil. After the film’s release, hundreds of think pieces appeared online, each wondering if Iron Man, in fact, did have PTSD. This hesitancy to address its heroes’ mental health has been par for the course for Marvel so far, but “Jessica Jones” might herald a new era.

Stark’s struggle is far from the only prominent example of mental health issues appearing in Marvel projects. In The Avengers, Hawkeye and Black Widow briefly discuss their shared experiences being tortured, but in typical Joss Whedon style, the exchange is wrapped up with a punchline.

Hawkeye: You don’t understand. Have you ever had someone take your brain and play? Take you out and stuff something else in? You know what it’s like to be unmade?

Black Widow: You know that I do.

Hawkeye: Why am I back? How’d you get him out?

Black Widow: Cognitive re-calibration. I hit you really hard in the head.

Like the Iron Man plotline, the characters are basically left alone to heal themselves — emotionally or physically — through the course of the story. Blockbuster films, Marvel has realized, can’t give trauma the narrative focus it needs without alienating a huge faction of its audience. But that’s the beauty of Jessica Jones, Netflix’s newest Marvel series, a show built on alienation.

Marvel’s Jessica Jones, the twelve-episode series released by Netflix on November 20, uses the direct language the Marvel cinematic universe has been hinting at utilizing for years. Jessica isn’t just “shaken”; she has diagnosed PTSD. She wasn’t just violated by the series villain, Kilgrave; she was “raped,” as she says repeatedly in episode eight. In a couple lines of dialogue, Jessica Jones says the word “rape” more often then it has appeared in any previous Marvel production, though she is not the first character to be violated.

Although Jessica Jones doesn’t quite stick its landing when portraying all mental illnesses — Malcolm’s life-consuming drug addiction is seemingly cured after a couple clean days, and two of Jessica’s mentally unstable neighbors are played for laughs — its progressive portrayal of emotional and neurological trauma is a major development for the franchise.

Jessica may be uncannily strong, but her emotional progress is firmly grounded in reality. She uses coping skills, including a mantra she learned from a therapist, and organizes a support group for other survivors of Kilgrave’s torture. She also, realistically, turns to substance abuse in order to dull her pain. Although she is the only superhuman in her story affected by Kilgrave (technically Patsy Walker, aka Hellcat, though a hero in her own right, is not superhuman in this universe), Jessica’s trauma is no different than the torture suffered by the average humans around her. She validates her own experience, but most importantly validates others’ struggle.

Kilgrave himself is a metaphor for the sinister nature of mental illness and its accompanying stigma. Those touched by Kilgrave’s cruelty do things they wouldn’t otherwise do, and when the spell is broken, they are left wondering if that cruelty was dormant inside them all along. They are unable to explain to others what was previously motivating them, because only prior victims know who Kilgrave is.

In episode 11, a minor character restrains herself from exposing Kilgrave to the police, brushing off what he’s done by telling a reporter, “I really hate mental illness.” The statement works in multiple ways, as Kilgrave is (Spoiler Alert!) technically infecting those around him. Casting the enigmatic David Tennant as Kilgrave really drives home the point that monsters don’t always appear dangerous at first glance. Even Kilgrave’s backstory appears, at first, to humanize him, but Jessica refuses to accept delusion or make assumptions without gathering all of the evidence. This makes her a great private investigator, but it also makes her journey through mental illness a healthy one.

In one scene, Jessica is confronted by a woman who lost her mother in the highly-publicized New York City battle from The Avengers. It’s a surprise to both Jessica and the audience that the woman is not being controlled by Kilgrave. The scope of the woman’s pain is so large that a small-time superhero like Jessica Jones can only ponder it, brushing off any responsibility she has to other super-folk by blaming the incident on “the big green guy and the flag-waver.”

While the Hulk and Captain America can’t concern themselves with petty crime, Jessica Jones can’t worry for too long about an alien invasion. By giving Jessica a central role in her own series, Marvel validates the internal work being done by its smaller-scale heroes.

With Jessica Jones, Marvel has reminded us that every superhero, regardless of how large or small her impact might be on the world, is susceptible to the effects of trauma. That is a courageous assertion for a brand that owes its livelihood to fun, brightly-colored films stuffed to the seams with pithy dialogue. If the franchise explores the mental and emotional toil suffered by its heroes in future projects, perhaps in Bucky’s deprogramming, or through further exploration of Tony Stark’s PTSD, audiences can expect a nuanced and improved portrayal of these issues. We’re watching a post-Jessica Jones Marvel Universe now.