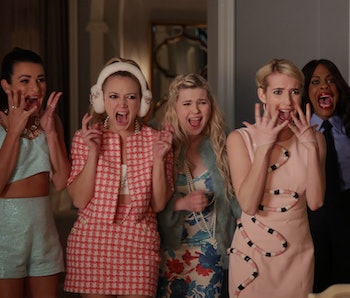 Scream Queens is funny. One-liners are spat out by Kappa sorority president, Chanel, with unearned vitriol. Pledges are decapitated by lawnmowers. It’s irreverent, brash, and ribald, the type of fun-time fare that’s perfect brainless binge fodder. It’s also wildly inconsistent; a lack of loyalty toward a coherent story arc is its biggest crime. That matter has yet to phase audiences, in particular, its intended demographic that shrieks along with the show’s biggest wins, ignoring its failures.

Ryan Murphy’s new series debuted this fall to divided critical opinion. The general consensus acknowledges the show’s strongest attributes — blood-soaked parody and caustic satire — and how their absence turns the plot into a grating mess. Its fans, however, are unanimous in their adoration. To them, it’s simply the best show ever. Those who watch and love it can’t see the show for its queens.

“I just watched Scream Queens and it was amazing,” says one cornered viewer. “It was terrifying at moments, I was on the edge of my seat.” “This is like an awesome horror movie that’s also hilariously funny,” says another. Awesome! Amazing! These are the types of hyperbole we casually throw about in everyday conversation. And yet they’re still loaded with power and praise that reaches Murphy and his cast of queens, eager to retweet those who rejoice at the show’s awesomeness:

Likewise, Ariana Grande’s re-appearance as Chanel 2 on last night’s episode sparked tons of social media repartee. None of which centred around how good it was, or what intrigue stirred in the latest developments.

That latter pair of tweets echoes a sentiment that can be heard across the web. A ridiculous, and at times brainless show still continues to draw in viewers who aren’t entirely sure why they’re tuning in. That’s as far as the criticism goes. Pump ups and high fives are dished out based on one-liner deliveries — after all, Emma Roberts’ panache for articulate put-downs is unrivalled — and GIFs flood social media moments after episodes air. The entire series is primed towards bite-sized ingestion. Chanel’s quips, Chad Radwell’s rants, Dean Munsch’s delirium, all wrapped into vignettes that enable fans to share and spread the word. Those same viewers gaze upon the show with idolatry for its wit, and ignorance toward the entire purpose of its existence: telling a good story.

It’s not that Scream Queens is bad — it’s just not as good as it could be. Somehow its middle-of-the-road aspirations have been accepted and we’re left with a comedy-horror that’s unsure which genre it should homage or which plot thread deserves exploring. What keeps me tuning in is not to find out who the other Red Devil killer is — I’m unfussed at this point — but for the sharp offensive barbs traded between Chanel and the rest of the Chanels; the joy of watching Jamie Lee Curtis not giving a shit and the ridiculous stuff that Denise Hemphill comes out with. Our own Lauren Sarner admits that it’s not the best show of the fall season — it’s the most fun. I agree. But if audiences were half as responsive to the show’s shortcomings as they are to its successes, then maybe, just maybe, it could be both.