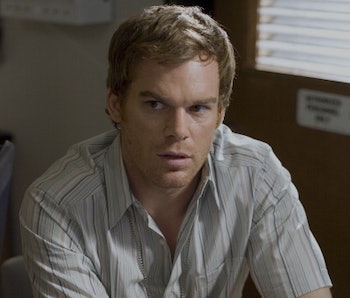 I have a terrible confession: I watched Dexter to its bitter, nonsensical, lumberjacked-up end. A show about a serial killer could have ended with him caught, imprisoned, or getting away with it, each of which would have been interesting and consistent with everything the show had established. Instead, the writers in 2013 chose to end their run by turning Dexter into a lumberjack. This made no damn sense in any universe, let alone the one that Dexter had established over 96 episodes. It was a decision so mind-bogglingly asinine it entered the lexicon as “pulling a Dexter” and in shrugging observations such as, “The ending wasn’t great, but at least they didn’t make him a lumberjack.”

The signs were all there, that I should have done almost literally anything else with my time. The show Pollocked plotlines throughout the last season. There was the bald guy we never cared about, discovering that he had a grown daughter nobody cares about. Maybe their bonding would go somewhere that had something to do with the main story line? Spoiler alert: It didn’t. Another sign was a new adversary only faintly as interesting as others Dexter had faced in the past. Maybe their final showdown would still somehow eclipse others from prior, better seasons …? Spoiler alert: Nah.

Why did I waste hours of my life watching this? Because I had fallen into a black hole of inertia-watching, the less cocky but more insidious cousin of hate-watching and the mother of many a miserable binge-watch. It occurs when you continue watching a show far beyond the point at which it truly interested you, and usually happens for one of three reasons:

1. Misplaced determination. Having come this far, you might as well finish. (That was mine with Dexter. And Sons of Anarchy. And True Blood. I think I have a problem.) This is sunk-cost thinking in its purest form: Throwing perfectly good time after bad times you can’t get back.

2. The sloth of familiarity. It’s on, and it’s in front of you, and it’s not great but it’s not terrible either, and it occasionally shows promise, so why not. (This is mine with True Detective and Outlander.) This is the sort of rationale that keeps people in 10-month relationships they should have ended after four straight blah dates.

3. Blind curiosity. Some elements seem mildly intriguing and/or mysterious. Optimism, the enemy of every television watcher, whispers in your ear that maybe you’ll find answers, revelations, closure. Instead, the writers drag their feet. (This is mine with The Leftovers.)

Inertia-watching can creep up on you, flu-like, but it’s hardly incurable. I easily ditched Heroes and Broadchurch a couple seasons in, when the writers revealed that they were no longer interested in creating dialogue or situations that made any sense. I had no problem Hell No-ing out of Girls and The Last Man On Earth after one season apiece, when it became apparent that the writers were determined to make us hate the characters. Why should we tune in to spend time with people who are consistently the worst? Especially when they hadn’t earned their infamy, not in the mode of Walter White or Jax Teller or Margery Tyrell — characters with actual arcs.

Inertia-watching will siphon off your time until it starts chipping away at your soul. To avoid it, ask yourself constantly: Can I trust these writers?

Damon Lindeloff, on the other hand, who is doing The Leftovers, previously did Lost, which its poor fans inertia-watched in legions until its desultory denouement. This, we will toss.

True Detective announced itself as a stealth inertia watch after its promising early episodes. (Though it did tip us off at the top: as protagonist names go, Rust Cohle is up there with Anastasia Steele.) Midway through it fizzled into neo-noir cliches. I guessed from a mile away that the “conflict” between the two men would involve Rust sleeping with Hart’s wife, and yup. Its supposed climax abandoned the clues it had been hinting at for eight episodes and threw us an unimaginative hillbilly serial killer in the 11th hour. If this had been a 12-episode series, I would’ve quit after six. But there I was for the finale, caught in the thralls of inertia. And I’m already getting ready for the next season, if only to learn why Colin Farrell stole a ‘stache off a horse thief in Indian Territory.

Trustworthy writers don’t resort to shocking audiences to cover up their bankruptcy of ideas. For all his indulgences, Hannibal creator Bryan Fuller hasn’t succumbed to the rape storylines that have enthralled so many show runners. The Game of Thrones writers waver here: the Theon torture storyline, the Jamie/Cersei fiasco last season, and Sansa Stark’s wedding night come to mind. But the writers vary between episodes far more than most, and the show still does expect us to be horrified by its sexual violence, even amid atrocity galore. Is it an inertia-watch if I already know I won’t quit until I know whether Ser Pounce will be the one to sit on the Iron Throne in the end? Or whether Gendry will ever return from the world’s longest boat trip? Or if the Hound is alive, because I’m in denial and it didn’t happen onscreen, you guys.

When you’re inertia-watching, too often it’s because you either don’t need to know what’s going to happen, or feel that you don’t need to watch in order to find out. (The last is a response to inertia-TV writing.) One sure sign of the inertia-watch is half-watching: tweeting, emailing, texting 15 minutes into an episode. If a show you once enjoyed has become background accompaniment to flossing, consider breaking up with it.

The enlightened television junkie outsources some of the work of navigating a shaky series. Read reviews, read the show’s Reddit, read the Entertainment Weekly articles that promise to reveal tantalizing new information about the show but instead tapdance around anything approaching real intel. Getting Internet-geeky on iffy shows will save you from wasting a lot more time in the future. Listen to trusty reviewers when they starts to hem/haw about a show for several episodes. Don’t be the poor A.V. Club scribe who reached the end of Dexter only to declare: “The Dexter team outdid itself. Some folks would say ‘This show is as shitty as it can possibly be, so now we can rest on our laurels.’ But not Scott Buck and his team. They never stop striving to create the most offensively stupid show on television.” The terrible TV had been on the wall for an entire season.

A reviewer is paid for that slog. You are not, so you can always change the channel or go play outside. Breathe fresh air. Try out some other modes of entertainment. (I hear those printed word-and-page contraptions are still a thing.) The essential step is simply to stop for a moment. You’ll find that, if it was true inertia-watching, Newtonian mechanics will begin to work in your favor, and a bad show will tend to remain at rest.