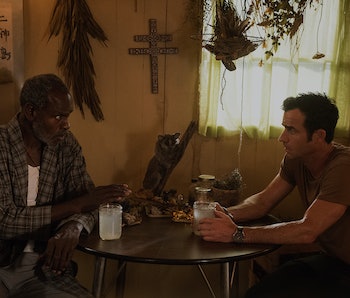 In its most recent episode, “A Most Powerful Adversary,” The Leftovers just pulled a Game of Thrones and seemingly executed its protagonist. Two Inverse writers discuss. SPOILERS AHEAD.

Lauren Sarner: Kevin might be gone for good, Ned Stark style rather than Jon Snow style. Like Ned, Kevin has dug himself a hole too deep to crawl out of: his relationship with Nora has imploded, he’s no longer attempting to maintain a facade of sanity — as we saw from his outburst to Patti in the hardware store — and he doesn’t seem to notice or care that Laurie is obviously lying about Tom being OK. I think this was the first time we’ve seen him confirm that he’s actually given up on Tom. Last season we saw that he still deeply cared about Tom and tried to maintain that connection, reaching out with frequent phone calls. Plus, he’s dropped his gruff tough-guy act and let Laurie in on how much he’s struggling with his grip on reality.

Although he tells Virgil that he doesn’t want to die, his actions say otherwise: Kevin is a condemned man. Whether he wants to admit it, he’s at the end of his rope. Swallowing that poison was an act of surrender. It shows how far gone his psychological state is that skeptical, grumpy Kevin would trust “a magical black man at the edge of the woods,” as Patti says, and down a cup of poison without hesitation.

I’m still working out how I feel about it. The fan in me is horrified — I like Kevin and that scene was disturbing as fuck. The critic in me is saying “let’s wait and see,” because the writing this season has been next-level, so I’ll trust that they’re going somewhere with this. What do you think, Winston — is he dead for good? And is this smart writing or a cheap trick from a show that’s usually above that?

Winston Cook-Wilson: It’s certainly possible that Kevin is dead as a doornail. I wouldn’t put it past the show, which never really goes the expected way. It seems almost to get off on leaving main characters for a while to focus on ancillary storylines that speak to its pseudo-religious, mystical themes.

But I’m going to argue that it’s more likely that he will come back to “life” in some form, whether literally or not. It’s very possible that Michael — who dragged Kevin off screen at the end of the episode — is going to take immediate action to revive him at the top of next week’s installment, to facilitate some sort of cleansing for his mind and soul. The show this season has gone even heavier on cliffhangers, as if to make sure people watch until the end without getting bored or too frustrated — as many did last season.

I also don’t totally understand why Patti so desperately wanted Kevin not to kill himself — doesn’t she want to do damage to (or “battle” with) him in the great beyond, the only place where that seems to be possible? Or at least not be stuck wandering the mortal plane with him forever?

Or does this reaction just signify that she is a manifestation of his subconscious — a psychotic invention — as Laurie told him? If Patti is just some part of him — an invented guardian angel whose premonitions of the immediate future just happen to always be correct — then Patti’s cry could be just the other side of Kevin crying out.

But in terms of whether Kevin has been taken rudely (or even lazily) from us without explanation — I do think we will get closure in one way or another. Probably new plotlines involving him will open up, even if that is him coming back to glom on to a living soul Patti-style. I can’t help thinking of the final conversation with Nora, where he makes her promise that if he comes back without Patti, that she will believe him when he tells her. I imagine that his soul, floating between life and death in those final moments Virgil describes when his heart stops, will fight as hard as it could to get back to Nora and his family. I could see him appearing to Nora, and finally explaining her role, with perspective from the beyond. We still need to know whether she is actually a “lens” — if those crazy pseudo-scientists were actually crazy or if they had hit on some truth. I am really hoping that she is actually, in some obscure sense, a negative or demonic presence that’s setting things off-balance.

I believe that this show thinks of “life” in an expansive, metaphysical sense. Also, few characters ever disappear completely. The Guilty Remnant basically thought of themselves as dead — or in a limbo between the two states — and semi-deistic figures like Holy Wayne seemed to operate beyond life and death. Whether these are ruses, and the world is totally without supernatural or unexplained phenomena, has never been explained.

Also, the disappeared are effectively alive — they exert their influence on everyone. Their memory is imbued deep in the hearts and minds of every character in the show, and affects their often irrational-seeming actions. The Departure threw the world off its axis. Now we will just have to see if the chaos can be explained, and at all rectified. Is healing possible? That is the question the show is always asking, and whether Kevin’s death (as I believe, a temporary one) will be a step backwards from that, or a step toward future understanding.

I don’t know, Lauren, do you think I’m thinking too figuratively here, or being too fanciful in imagining more supernatural (magical realism) stuff is going to seep in?

Lauren: I feel split about that. One of the things this show does best is navigating between the supernatural and the simply strange. Magical realism is a tough genre to nail in a visual medium but The Leftovers consistently does; I can’t think of any other show on TV that flirts with being supernatural so well without actively diving over the edge.

Other than the Departure, all the events we’ve seen thus far that could be supernatural have plausible alternate explanations. Holy Wayne might have had magical hug powers or he might have been a con man with a creepy penchant for underage Asian girls; Kevin could commune with ghosts or he could be experiencing a psychotic break; Mary Jamison could have woken up or Matt could have accidentally raped her in his wishful thinking. Even Evie and her friends could have disappeared on purpose — we still haven’t found out what was up with the naked woods frolicking from the first episode, or their weird silent car ride.

The Leftovers thrives on ambiguity, which enables it to treat its viewers like adults. Everything is open to interpretation, which gives it a philosophical depth few other shows possess.

That’s why this development and Kevin’s potential return makes me nervous. As much as I like the guy and want him to stick around, if he does, that will be a definitive dive into a more supernatural territory. I have no doubt it will navigate it in an interesting way — I hadn’t even thought that he might appear to Nora, as you mentioned — but I worry about this show losing that delicious sense of ambiguity by making a clear step in the direction of the mystical.

But then, maybe a return would be somehow ambiguous. The show’s writing acrobatics are astonishing. In just one episode this season, they made me care about Tom and Laurie, two characters who previously bored me. It takes intensely strong characterization and self-aware writers to pull that off. I find myself not wanting to see Kevin’s “battle” with Patti play out: I hope it’s implied but unclear. I’m more interested in a showdown between Kevin and John Murphy. What do you think, Winston, will this show lose something if more supernatural stuff seeps in, or if it continues to navigate it the right way, will it maintain its depth?

Winston: It is hard to say. It could pull it off by being subtle, without showing any big, supernatural Events. After all, it didn’t depict the departure, just those who were left returning to find their loved ones completely gone. Perhaps all the magic will arrive at once.

One way or the other, I think — from what we’ve seen this season — that we’ll get all the explanation we need. I’m sure Lindelhof doesn’t really want another Lost situation — to risk an almost unanimously dissatisfied viewership. But maybe he DGAF and remains concerned with following his own obscure move. Or he realizes he’s automatically got a different viewership in the second season of a polarizing HBO show, with viewers who expect the unexpected.

But it feels like 50/50 of the viewership is gonna be mad about this ending. If he executes it astutely — gets all the points he wants to make in an effective order — I won’t be upset, even if we have dangling threads. Kevin continuing to be a character doesn’t seem like a foregone or necessarily bad conclusion. But you never know — maybe Theroux really wants to get back to making movies and being at home with Jennifer A, and this is just a kind of crude way to excuse him from a potential Season 3. Like The Leftovers, the TV industry works in mysterious ways.