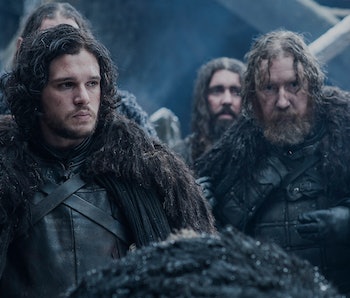 Game of Thrones is known for inciting passion, fury, and occasional TV destroying in its viewers, but Season Five’s ending, in which the last remaining hero bled out in the snow — the guy we thought must make it to the end, or else why bother following him in an isolated storyline for five seasons and giving him a mysterious origin story? — was at another level. Also known as The Stabbening or Stabgate if you prefer, it made the Internet lose their shit to an unprecedented degree. Kit Harington’s every movement has been monitored ever since, his hair has trended on Twitter, his every random comment analyzed with CIA level scrutiny. But his latest comment doesn’t need much analyzing to draw some Earth-shattering meaning. According to Jon Snow himself — Jon Snow does, in fact, live.

In an interview with a Dutch magazine, Kit Harington said,

Let’s just say that Game of Thrones will remain a part of my life for a while, I’ll probably be in my thirties when it’s over.

Harington is 28 years old. Seeing as the show is slotted to run for eight seasons, that falls rather nicely into his time frame.

On the one hand, you almost have to feel bad for Harington. He’s trying so hard, giving the most evasive answers he can, but he’s no match for the Reddit and Thrones fan excitement. The producers are probably plotting his death now that he let that slip. On the other hand, he got rich and famous in his first job out of drama school, so there’s that. Plus, there’s still the wording to consider: Harington will be back on the show, but everyone has said, time and again, that Jon Snow is dead. Valar Morghulis. So Jon Snow truthers, you might be vindicated…or perhaps Harington is sticking around in a more sinister capacity. Maybe The Night’s King was interested in Jon for more than his Hero Hair — as a potential recruit.

Harington has been spotted filming a battle scene, but who is to say he’s fighting for the good guys? Either way, may the Many Faced God bless you and your loose lips, Kit Harington.