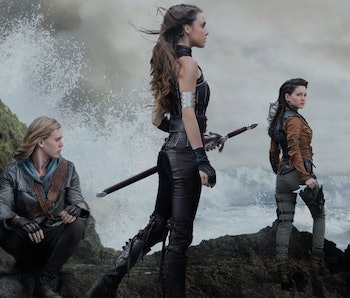 … become hotter than this?

If you’ve watched MTV’s The Shannara Chronicles, you’ve probably seen some Hot Elves. Indeed, most of the cast looks like they’ve come straight out of the MTV/CW Teen Casting Clone Labs with some elf ears added, with characters like:

And the breakout star, Funny But Sensitive Half-Elf.

Yet as tempting as it might to be just declare that Shannara is merely pandering to teen demographics since it’s on MTV, there’s more going on here. It is arguably the culmination of several generations of changes in how elves are understood as mythological beings.

As with most legends, it’s unclear exactly what the original concept of “elf” was supposed to be. (The Wikipedia page is, somewhat surprisingly, fairly clear about the confusion.) There is also some apparent linguistic conflation of elves and dwarves, particularly when it comes to the name “Alberich,” a cruel dwarf in Germanic mythology and Wagner’s Ring Cycle, but with an elven name. (Amusingly, Shannara’s elf king is played by the same actor as The Lord of the Rings’ dwarf representative, John Rhys-Davies.) In the Renaissance, William Shakespeare confused the matter even more in A Midsummer Night’s Dream, with elven legends and fairy legends becoming intertwined.

Yet even if the legends of elves, dwarves, and fairies did get muddled together, the three groups share certain traits. Shakespeare’s Oberon and Titania are sexual, magical, emotional, and capricious. The dwarves of Germanic mythology share that power and caprice, but their sexuality is significantly darker. They’re also expert craftsmen, creating all those magical rings that seem to cause nothing but trouble. And most importantly, they’re all beautiful or creators of beauty, and they all have the potential for cruelty. The former is what’s lasted through popular culture, while the latter is what’s been lost.

As with most things fantastic, it was J.R.R. Tolkien who clarified it for the modern form. He ignored the fairy side of things — the Christmas Elves of popular culture — and split the traits of the Germanic “elbs” into two halves: Dwarves were short, greedy, and skilled craftsmen; elves were tall, beautiful, cruel, and incomprehensible to humans.

But an odd thing happened to Tolkien’s mythology: A single slice of it, the Lord of the Rings trilogy, got pulled out, actually turned into published, marketable novels, and this small chunk of Tolkien’s entire shared universe became the dominating force behind modern fantasy. In it, both elves and dwarves are friendly rivals with each other and humans. While they may not best friends and guaranteed allies, they’re not murdering each other.

That’s not the case with Tolkien’s wider mythology, particularly The Silmarillion, his grand history of the entirety of Middle-earth, with The Lord of the Rings just a few pages at the end. Here the story is of the disasters of elven ambition, with the arrogant, cruel Noldor invading Middle-earth in pursuit of their greatest warrior, Fëanor’s craftsmanship: the jewels called the Silmarils. The Noldor slaughter their kinsmen, swear oaths of vengeance to murder anyone in their way, and engage in a long tragedy of betrayal and violence against evil, each other, humans, and dwarves.

Then in The Lord of the Rings, this all gets smoothed out into elves being distant, at worst. And even with that, Legolas is a constant heroic presence. That’s just in the novels: Peter Jackson’s films go out of their way to increase the role of elves in a primarily positive fashion, with Legolas portrayed by the dreamy Orlando Bloom, Arwen given more agency, Elrond sending swords to the heroes, and Galadriel sending reinforcements to Helm’s Deep. There are historical mistakes of craftsmanship in the rings, yes, but this is sidelined in favor of “elves are tall, beautiful, and awesome.” The only evidence of elven cruelty and caprice is in Galadriel’s warning to Frodo. “ALL SHALL LOVE ME AND DESPAIR,” declares Feanor’s niece, and the surviving queen of the Noldor.

But between the popularity of Tolkien’s novels and Jackson’s films came a generation of fantasy literature that took only the heroism and beauty of elves, and little of the caprice and cruelty, save perhaps mild, easily-transcended racism against humans. Essentially, before Tolkien, elves were primarily metaphorical, for the incomprehensible danger of nature, including human nature. After Tolkien, elves were an aesthetic, primarily based on the elven people of Middle-Earth.

In Terry Brooks’ Shannara novels — early pop fantasy influencers — elves are but one political faction of many, and one most likely to become conventionally “good” when needed. Or in Raymond E. Feist’s Riftwar novels, one of the young, would-be heroes gets a crush on the beautiful queen of the elves, and ends up married to her.

Beauty ends up being the defining feature of elves, and beauty is a bit of a problem. Our society associates it with elegance, wisdom, and trustworthiness: all traits of modern fantasy elves. As fantasy became increasingly visual — in film, television, games, and comics — elves became increasingly toothless.

Perhaps one of the dominant portrayals of elves in pop culture was Elfquest, a comic created in 1978 by Wendy and Richard Pini. With short, attractive, manga-inspired elves who had a propensity for showing skin, Elfquest made its adventurous, androgynous, angsty, and violent elves both compelling and sexy.

More importantly, it told a story entirely from the elven point of view. Humans are the incomprehensible aliens in the world of Elfquest, while the elves are our subjective, point-of-view characters. Elfquest was a key moment in stopping fantasy elves from being defined as oppositional to humans (more magical, more pure, more wise, more capricious, more powerful) and instead as simply an aesthetic style.

Meanwhile gaming, via Dungeons & Dragons, continued to remove elves from their position as metaphorical symbols for the unexplainable, and instead, ascribed them rules, literal histories, and political motives. Dragonlance divided its elves into two distinct political entities: the Qualinesti and Silvanesti. In the novels — which provided the core of the game universe — a Romeo and Juliet-style story between the rugged, heroic, torn half-elf Tanis and the beautiful, depressive elven princess Laurana became the romantic core of the story.

This is how elves had their metaphorical danger removed, and got turned into beautiful heroes. But there has been some pushback, most notably, from writers who are most keen to satirize and deconstruct the fantasy genre. Terry Pratchett makes fun of the domestication of elves in Lords and Ladies, one of his very best Discworld novels, when a young starry-eyed witch tries to summon Tolkien-like elves, and almost everyone expects them to be nice. They’re not. From Pratchett’s book:

“Although their faces were indeed the most beautiful Diamanda had ever seen, it was beginning to creep over her that there was something subtly wrong, some quirk of expression that did not quite fit.”

Meanwhile, the dominant force in fantasy today, George R.R. Martin’s Game of Thrones, doesn’t even call its elves elves. The Children of the Forest are almost entirely legendary, and their reappearance, late in the novels/show, is an indication that the entire human system is collapsing.

(As I write this, I notice that I am not mentioning many female writers; oddly, while there is no shortage of women writing fantasy literature, they rarely seem to have elves directly in their work. The most notable exception of this is Katherine Kerr’s decades-spanning Deverry series.)

Still, the dangerously sexual, capricious elves of legend have been largely tamed, apart from deliberate throwbacks like Pratchett’s. It’s hard to say if this is a positive development or not, but the stereotypes about beauty remain a problem. A show like Shannara does what, say, The Lord of the Rings didn’t, in having non-white elves, which is an improvement. But as long as beauty is the primary consideration, modern fantasy elves will find themselves more in the same spot as vampires, an increasingly domesticated excuse for casts to be filled with thin, ethereally attractive young people, and little more.