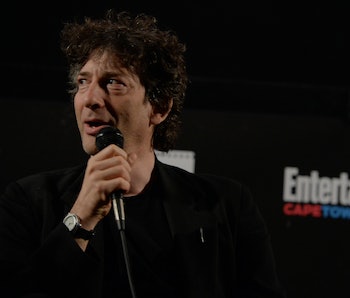 For those out of the Neil Gaiman loop, you might be a bit confused. He looks like Tim Burton’s lanky brother, has a loyal following akin to Joss Whedon, has written graphic novels … but also regular novels … for kids and for adults … and now he’s stolen Bryan Fuller from Hannibal for his show on Starz? What’s his deal? He can’t make up his mind about his career? Actually, in his own words, no, he can’t — his Twitter bio reads, “will eventually grow up and get a real job. Until then, will keep making things up and writing them down.” Now that the words of his magnum opus, American Gods, are finally being spun onscreen, it’s time you learned what his deal is and why this will be one of the best and most original shows on TV in 2017.

Gaiman is a multi-talented teller of weird tales and a rare famous person who seems to be a genuinely thoughtful, all-around good guy. He’s not afraid to get real with people about the culture of fan entitlement. He crusades against censorship. He’s the man behind arguably the most interesting graphic novel since Watchmen. He doesn’t talk down to kids when he writes for them. Here he is talking about writing for children:

American Gods is a bizarre story; the kind of book it would be easy to mangle onscreen. But Gaiman is going to be heavily involved in the show. This is not a guy who just wants money; otherwise he’d have let HBO go forward with it years ago. This is a guy who wants justice done to his story and characters.

Like a literary Guillermo del Toro, Gaiman’s work plays in the realm of dark fairy tales. “Once upon a time,” he writes, “back when … every quest was worth going on … and an honest young man with a good heart and a great deal of luck could always wind up with a princess and half the kingdom - back then, fairytales were for adults. … Fairytales became unfashionable for adults before children discovered them, though. … When I was growing up, I wanted to read something that was unapologetically a fairytale, and just as unapologetically for adults … I couldn’t find it on the shelves, so I decided to write one.”

American Gods is his magnum opus. There are fairy-tale creatures like pixies and leprechauns. There are vulgar and strange scenes like a man being eaten by a vagina. There are philosophical musings on the nature of belief. There’s a wacky road trip. There is complexity and beauty and ugliness. Here’s a sample passage:

“I believe that all politicians are unprincipled crooks and I still believe that they are better than the alternative. I believe that candy really did taste better when I was a kid, that it’s aerodynamically impossible for a bumble bee to fly, that light is a wave and a particle, that there’s a cat in a box somewhere who’s alive and dead at the same time (although if they don’t ever open the box to feed it it’ll eventually just be two different kinds of dead) … I believe in a personal god who cares about me and worries and oversees everything I do. I believe in an impersonal god who set the universe in motion and went off to hang with her girlfriends and doesn’t even know that I’m alive. I believe in an empty and godless universe of causal chaos, background noise, and sheer blind luck. I believe that anyone who says sex is overrated just hasn’t done it properly. I believe that anyone who claims to know what’s going on will lie about the little things too. I believe in absolute honesty and sensible social lies. I believe in a woman’s right to choose, a baby’s right to live, that while all human life is sacred there’s nothing wrong with the death penalty if you can trust the legal system implicitly, and that no one but a moron would ever trust the legal system. I believe that life is a game, that life is a cruel joke, and that life is what happens when you’re alive and that you might as well lie back and enjoy it.”

The novel finds the balance between being plot-based and circling around Themes and Big Ideas — yet unlike many stories about Big Ideas, it never takes itself too seriously. It acknowledges the absurdity of fairy-tale tropes, like when protagonist Shadow throws shade at a talking animal and the animal throws it right back:

“The bird turned, head tipped, suspiciously, on one side, and it stared at him with bright eyes. ‘Say Nevermore,’ Shadow said. ‘Fuck you,’ said the Raven.”

The basic premise of American Gods is that pagan gods and mythical creatures immigrated to America with their believers, but as their believers fell by the wayside, the gods were left stranded in America, working as hookers and gas station attendants, cab drivers, grifters. Anchoring this narrative — which skates seamlessly between light and dark, humor and pathos — is mysterious everyman Shadow, a taciturn ex-con who gets swept up into a road trip with a man who may or may not be an incarnation of Odin. It’s rich material for a show, and the man who is most perfectly suited to play Shadow agrees.

Just picture him with slightly less eyeshadow and a slightly more eloquence.

The book isn’t without flaws — the ending feels rushed and overstuffed, as if Gaiman could have gone on for three books and crammed it into one — but that’s exactly why it has so much potential as a show. Especially since the show runners aren’t going to be assholes and whitewash the clearly nonwhite protagonist.

Whether you want to read the book or wait to watch the story onscreen, it’s going to be a hell of a show. And if it’s done right, it will be the most interesting thing on TV since Game of Thrones. A big claim, yes, but anyone who says Gaiman is overrated hasn’t seen him done properly.

More like this
Entertainment
7 hours ago
Kate Siegel says Netflix’s Fall of the House of Usher is “like nothing anyone has ever seen”
By Dais Johnston
Entertainment
22 hours ago
Stranger Things cast unpack a "quite metaphorical" Season 4
By Eric Francisco
Entertainment
17 hours ago
15 years later, Doctor Who will (maybe) fix its biggest mistake
By Ryan Britt
Related Tags
Share: