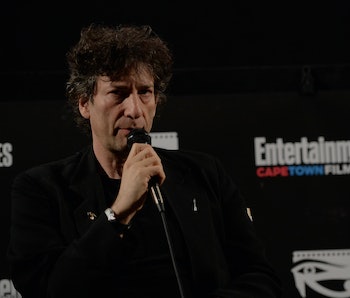 After years in development at HBO before languishing under Starz, the latter has announced Neil Gaiman’s dark fantasy novel American Gods has been green-lit for television and production will begin soon.

In fact, you are free to tweak the show’s Twitter channel with the tag #CastingShadow, a pun I didn’t get until I just typed it, with who you think should play protagonist Shadow Moon. Does Jason Mamoa have any free time from being Aquaman at the moment?

American Gods is a dense and sometimes bizarre novel, with man-eating eagles alongside man-eating vaginas, so it’s pretty gnarly that it’s being produced for premium cable. It’s not as long as War & Peace nor is it as gruesome as American Psycho, but if it had to be on network TV the adaptation would be weak steak, a two-hour movie is just too short.

Neil Gaiman on board as executive producer is a total bonus. It’s not clear how deep his influence goes, but it’s Neil Freaking Gaiman having some say over his work. Consider us stoked.