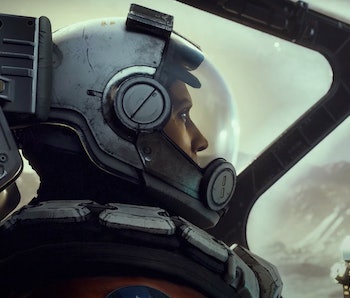 Bethesda is known for its massive, sprawling RPG series like The Elder Scrolls and Fallout. While those two series remain priorities, the developer is also working on its first new IP in 25 years called Starfield. This game will send players to the vastness of space, with exploration, story, and combat at the forefront of the experience. Despite the excitement about Starfield, Bethesda has kept much of the game under wraps, meaning there’s plenty to discover ahead of its release. But when will this game launch, and what will it look like in action? Even after a recent delay, excitement for Bethesda’s next massive game doesn’t seem to be stopping.

Here’s what we know about Starfield, Bethesda’s next RPG.

When is the Starfield release date?

Starfield was originally supposed to launch on November 11, 2022, but was delayed to the first half of 2023. Bethesda explained that it has “incredible ambitions” for Starfield and wants to ensure that it delivers “the best, most polished” version of the game. The company did not reveal the new release date, but perhaps we’ll get an update later in 2022.

Is there a Starfield trailer?

Yes! After years of scraping by on the initial teaser trailer from June 2018, a full trailer was released during E3 2021. You can watch it here.

The main character moves about in a ship parked on what could be the Moon or some moon-like planetary body. The female character narrates a bit of exposition, explaining how you’ve joined “Constellation,” which is an organization in charge of space exploration, it would seem. Something that you’ve found “is the key to unlocking ... everything.” But there’s no telling exactly what that means.

This trailer also gives us a slightly better grasp of the available technology. Ships don’t look much more advanced than what we have in real life, and even the robot we see is somewhat realistic.

At the end of August 2021, Bethesda published a few trailers showcasing some of the game’s locales. One focuses on New Atlantis, which Design Director Emil Pagliarulo describes as a “melting pot.”

There are also videos for Neon and Akila. These short clips hint at the game’s art direction while offering a little insight into the various cities we’ll get to explore.

Then, in mid-October 2021, devs released a brief but informational video called “The Settled Systems.” Design Director Emil Pagliarulo hosts it, overviewing some of the different factions at play in the game. It also confirms that the game takes place about 50 lightyears away from our Solar System in 2330. There was a colony war between the United Colonies and Freestar Collective two decades prior.

In November 2021, Bethesda released a new video called Into the Starfield: The Endless Pursuit. The video featured Art Director Matt Carofano, Studio Director Angela Browder, and Game Director Todd Howard. It didn’t have any new information about Starfield, but the video featured lots of concept art that gives us a clearer picture of how the upcoming space RPG will look.

In March 2022, Director Todd Howard and crew released a short video called “Made for Wanderers.” In a five-minute developer diary, high-ranking team members highlight a few of the factions players will encounter and potentially join on their journey. In addition to the exploration-focused Constellation clan, there are at least four other groups to join.

The video also teases a persuasion minigame designed to flesh out dialogue, and it shows off the first look at one of the game’s companion NPCs. This is what it looks like.

At the end of April, 2022, Bethesda published a video about the game’s music. This video highlights Starfield’s main musical theme, with details on the way it relates to the game itself. Composer Inn Zur explained that—much like space itself—the music will sound organic while still evoking the feeling of going on a journey.

When will Bethesda reveal more of Starfield?

It’s highly likely Bethesda will show more of Starfield during its Xbox and Bethesda Showcase this summer. It’s still unclear what the event will look like, but considering the game is close to being complete, summer 2022 seems like a safe bet for more details.

Will Starfield be an Xbox exclusive?

Yes, it will be exclusive to Xbox Series X|S and PC. This was almost certain to happen after Microsoft acquired Bethesda in 2020. If Microsoft and Sony hash out a deal, the game could eventually come to PlayStation consoles after a certain period of time has passed, but for right now, Starfield is Xbox exclusive.

Will Starfield be on Xbox Game Pass?

Yes. You’ll be able to play Starfield on Game Pass the day it launches since it’s a first-party Microsoft game.

Has Starfield’s gameplay been revealed?

No, not yet. We do know that it's a sci-fi game. At E3 2019, Elon Musk chatted up Todd Howard about Starfield. From that conversation, it was made known that Starfield space travel will feel shakey.

“Traveling in space in our game, I want to say it's like flight in the '40s, like it's dangerous," says Howard. This implies a very scavenger-esque outlook to spacefaring in Starfield. In the conversation, Howard and Musk also discuss idiosyncratic elements to Starfield, like collecting fuel and other things.

We’ll likely get to see the game in action sometime in the summer of 2022.

Is Elon Musk involved with Starfield?

Yes. Musk is a consultant in some capacity on the upcoming game. In 2019, Howard revealed he visited Musk’s company SpaceX in hopes of gathering inspiration for the upcoming game. While it’s unclear to what degree Musk will play a part in the final product, we do know Bethesda is aiming for some degree of authenticity with Starfield.

How big is Starfield?

Due to the limited information available, we don't know how big Starfield will be as a whole. We know that there is at least four times the number of devs working on Starfield than Bethesda had on Skyrim or Fallout 4, implying it could be larger in scale.

Tying into that, Howard confirmed in the interview that NPCs would play a large role in the game, and cities would be massive. All of this to say, it sounds like Starfield will be absolutely massive.

Are there any Starfield leaks?

This image is the clearest picture that we’ve had on Starfield yet. It comes from Twitter user Skullzi, who claims to have received it directly from a Bethesda employee. From the image, we can glean our first look at Starfield’s HUD. Players seem to have access to a weapon on hand. The one currently being used appears to be a shotgun. There seem to be two other gauges. Perhaps one is for health, and another is for oxygen? The spacesuit seems a bit janky, which ties into Howard’s remark that space travel is dangerous in Starfield.

According to Skullzi, this leak comes from a Starfield 2018 build. The same person also leaked other images, showing more astronauts staring at spaceships. There are also claims that Starfield will feature multiple factions.

Some of these leaks were seemingly confirmed after a Bethesda employee was spotted sporting a shirt with a logo identical to the ones in the leaked photos. If leaks were able to get a very specific icon right, they likely got more right as well.

Although not an outright leak, Bethesda released a survey asking players about how they spend time in spaceships and what they like to do in said spaceships. Many players have taken this to suggest Bethesda was discussing Starfield in the survey, meaning that it could be used to eke out what features might be in the game. The survey mentioned something about Spaceship customization, implying that it could be a feature in Starfield.

In the same survey, Bethesda mentions difficulty and gameplay pace, implying both could still be in flux for the upcoming game. There’s still a lot to learn about Bethesda’s next game, but we’ll likely find out more soon.

Starfield launches for Xbox Series X/S and PC during the first half of 2023.