"What Microsoft owns, Sony cannot get" 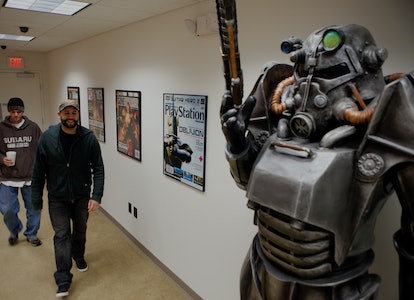 The surprising news that Microsoft will acquire Bethesda parent company Zenimax for $7.5 billion raises a whole slew of questions. Will franchises like Doom, Fallout, and Skyrim become Xbox exclusives? What does this mean for upcoming games like Starfield and The Elder Scrolls VI? And what does Zenimax even gain from moving under the Microsoft umbrella?

Microsoft and Zenimax executives are saying silent for the most part on what this deal means for Bethesda, but the company's founder Christopher Weaver (who left in 2002) is free to speak on the subject. In 2007, Weaver was Zenimax's largest shareholder with a 33 percent stake in the company. Today, he says he holds "a pittance of the stock." Nevertheless, he remains an interested party, to say the least.

"I was aware of the transaction and it is obviously gratifying news," Weaver tells Inverse.

For a bit more insight into the Microsoft-Bethesda deal, we spoke to Weaver via email, where he shared his thoughts on everything from what the deal means for upcoming games ("I have yet to meet an executive who does not want to accelerate the sale of a potential product") to the chances of Xbox exclusivity ("What Microsoft owns, Sony cannot get") to his opinion on the growing trend toward industry consolidation ("a product can only be as good as the creatives who make it") and disc-less gaming consoles ("High-speed internet will provide the bridge.")

Read the full interview below.

Microsoft obviously gets a lot from this deal, but what does Bethesda stand to gain from selling?

I will try to answer your questions but with the caveat that I am now more of an academic, while also directing a project at the Smithsonian’s Lemelson Center for the Study of Innovation and Invention on archiving extensive oral histories of the creators of the computer game Industry. The point being that my focus has been on more large picture issues than any one company — even if it is the one I created.

I think this is an extremely interesting acquisition on the part of both groups. Microsoft deepens their bench instantly with one of the most experienced companies in entertainment software (during a time when video game sales are at an all-time high), and Bethesda gets the benefit of concentrating their creative firepower on software that feeds the Microsoft pipelines. A good prospective marriage of interests with a large domestic public partner.

Was $7.5 billion a good price? Did Microsoft overpay or get a good deal?

As a private concern, Bethesda's internal numbers are closely held. Microsoft is a very sophisticated buyer and I am sure their due diligence supported the deal they negotiated with Zenimax.

Microsoft and Sony have spent the last few years acquiring other game studios. Is consolidation good or bad for the video game industry?

This is a difficult answer because it is so dependent upon the company being acquired. On the one hand, digital distribution, powerful tools, and sophisticated game engines have brought the cost of quality development down into the realm of the indies. At the end of the day, a product can only be as good as the creatives who make it. Properly managed, consolidation can provide a powerful mechanism for groups to share experience and "best practices." I do not think it is any accident that this announcement occurred so close to Sony’s PS5 announcement. There are only a limited number of proven creators of AAA. What Microsoft owns, Sony cannot get. There are many economies of scale that consolidation between the right partners has the capacity to provide, but the ultimate test will be evidenced by the quality of products produced over time.

What does Bethesda's sale mean for games that are currently in development like Starfield and Elder Scrolls VI?

My understanding is that Microsoft respects Bethesda’s 34 years of proven ability to produce quality software and has promised to let Bethesda be Bethesda. Nevertheless, I have yet to meet an executive who does not want to accelerate the sale of a potential product. The trick is to keep those administrators at bay until a product is truly ready for prime time. Bethesda has been producing commercial software for a very long time. I have to believe Microsoft execs will be responsive to Bethesda's input.

“I have to believe Microsoft execs will be responsive to Bethesda's input.”

In 2002, Morrowind was a Microsoft exclusive. Can you talk about Bethesda's relationship with Microsoft in the early 2000s?

We had an excellent relationship with Microsoft in the late '90s/early 2000s. In fact, I was close to key members of the original Xbox development team and shared many thoughts for what their “next-gen" console could bring to gaming. That team took many leaps of technical faith and built a box that IMHO surpassed everything else at the time. While overseas sales might not have reflected that, when coupled with forward-looking moves to Xbox Live, and their prescient purchase of studios such as Bungie, Microsoft has proven they are a force with whom everyone in the industry must reckon.

Microsoft and Sony both offer cheaper versions of their next-generation consoles with no disc drive. Is this the right direction for the industry?

I do not think the elimination of the disc drive will prove to be overly material. Both 9th generation consoles will have increased processing capability and SSDs. Once people get used to this short-term perceived limitation, they will realize a dramatic increase in reliability and responsiveness. High-speed internet will provide the bridge.

Any other thoughts on this momentous deal? Is there anything obvious no one has realized yet?

The acquisition of Bungie acted as an important trigger for the success of the early Xbox. Depending upon how soon Bethesda can prime the Microsoft pipeline, I suspect Microsoft is looking at their playbook and looking to repeat one of its “best moves.” If the strategy works, it will be a brilliant counter-move against Sony. Users from around the world will be the ultimate beneficiaries of this deal. I wish them well.

More like this
Gaming
Jan. 18, 2023
Microsoft layoffs don’t tell us much about the future of Xbox — yet
By Willa Rowe
Gaming
Jan. 25, 2023
Redfall is Bethesda’s vampire-infested co-op shooter — what to know
By Jess Reyes
Gaming
13 hours ago
You need to play the best Xbox exclusive in a decade on Game Pass ASAP
By Hayes Madsen
LEARN SOMETHING NEW EVERY DAY.
Related Tags
Share: