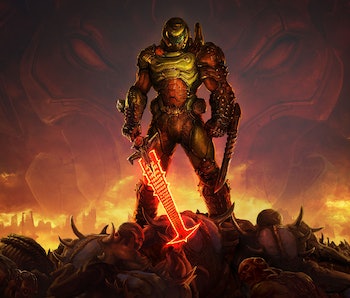 Just one day before preorders begin for the Xbox Series X, Microsoft made a gargantuan announcement on Monday: It has acquired ZeniMax Media Inc. which owns Bethesda Softworks, publisher of several major franchises including Doom, Elder Scrolls, Fallout, and more.

Not only does Microsoft finally have (more) established franchises to carry the Xbox brand into the next generation, but it will also heat up the console wars as the stakes for consumers rise exponentially.

Rest assured: This is one of the biggest acquisitions in video game history. At an eye-watering price of $7.5 billion cash, Microsoft spent a few billion more than the $4.5 billion Disney spent to buy Star Wars and the $4 billion it spent for Marvel. For nearly the cost of two Marvel Cinematic Universes, Microsoft now owns some of the most popular franchises in gaming today.

It is also no mistake Microsoft made the announcement on September 21, a day before pre-orders for the Xbox Series X console are available. (This also follows a week after the haphazard preorders for the PlayStation 5, a mad dash that left customers frustrated and confused.)

Although no new games were announced along with the ZeniMax acquisition, it may seem all but certain that future sequels to games like Fallout, Doom, and Prey are destined for Xbox and PC exclusivity.

Or is it? First, a few games under the ownership of ZeniMax are already set for the PlayStation 5, namely Deathloop and Ghostwire: Tokyo. These games, announced for Sony's console, will remain PlayStation 5 timed exclusives, meaning there will be a window of time they are available on the PlayStation 5 before other platforms.

But then what? In an interview with Bloomberg, Microsoft's Phil Spencer spoke of other future games, namely the upcoming sci-fi RPG Starfield, as headed for the Xbox and PC and "other consoles on a case-by-case basis." So, it is possible future sequels to franchises like Doom will also release on Nintendo, Sony, or even Google platforms in addition to Xbox and PC.

But for seven-and-a half billion dollars, how likely is that scenario? George Jijiashvili, Senior Analyst at Omdia, says the matter of exclusivity "looms large" over Xbox now. And it may signal the Xbox finally having serious exclusive content in a way the brand hasn't in a long time.

"Microsoft has not opted for the exclusive route with its past acquisitions, but this may change."

"Microsoft has not opted for the exclusive route with its past acquisitions, but this may change given the scale," Jijiashvili tells Inverse in an interview. "If Microsoft does decide to make certain titles exclusive in the future, it would be an unprecedented level of focus on content from Xbox, akin to what we’re used to seeing from PlayStation and Nintendo."

A big focus from Microsoft has been its Netflix-style service, Xbox Game Pass, and its cloud service endeavor, xCloud. While Microsoft is competing strongly (and seemingly winning) over Google in cloud gaming, it's still pitted against Sony in the subscription service arena.

While Sony boasts a huge library (approximately 800-plus games) in its service PlayStation Now, Microsoft's Xbox Game Pass allows subscribers access to new games on the day of release. Xbox Game Pass has been called "the best deal in gaming" and "the stronger service" over the two.

With the next generation of video games arriving this holiday season, Jijiashvili doesn't think Bethesda's new marriage to Microsoft will tip anyone's scales when it comes to making a purchasing decision.

"This announcement will have little to no impact on the sales of PlayStation 5 and Xbox Series X/S at launch," Jijiashvili says. "Sony remains well-positioned, as it is currently the biggest player in terms of console userbase and sales."

The launch offerings for PlayStation 5, including Spider-Man: Miles Morales and Demon's Souls, are also substantial: "The fact of the matter is that most of the console gamers had already set their mind on a particular console," Jijiashvili says. He says his firm "still expects PS5 to outsell the new Xbox consoles two to one."

While Microsoft's new ownership of ZeniMax isn't an immediately strong indication of what's to come for the Xbox Series X, it does hint at what's to come in the future of the video games industry.

"We're going through a global recession triggered by Covid-19, and during times like these it’s likely that we’ll see more consolidation in the games industry," said Jijiashvili.