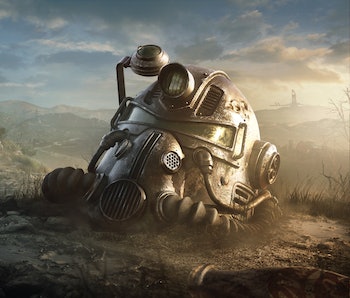 Popular games like Cuphead and The Last of Us are already getting the TV treatment, and Thursday it was announced that yet another major game will make the jump to a new medium: Fallout from Bethesda Game Studios.

Created as part of a partnership with Westworld creators' Kilter Films, the show based on the post-apocalyptic Fallout is now in development for Amazon Prime. It's a perfect fit for television that probably won't even directly adapt any of the games, but it could start blurring the lines between the storytelling mediums of video games and television.

On July 2, the official Twitter account for Fallout put out a cryptic video teasing a collaboration between Bethesda Game Studios, Kilter Films, and Amazon. Shortly thereafter, a television show was confirmed via an official press release. No release window or title for the Fallout show was given, but we learned that it is "currently in development with a series commitment," and will be produced by Jonathan Nolan, Lisa Joy, Todd Howard, and James Altman.

Todd Howard, Game Director for Fallout 3 and 4 is serving as Executive Producer on the show. He gave some insight into how this specific collaboration came together: "Over the last decade, we looked at many ways to bring Fallout to the screen,” Howard said. "But it was clear from the moment I first spoke with Jonah and Lisa a few years ago, that they and the team at Kilter were the ones to do it right. We’re enormous fans of their work and couldn’t be more excited to work with them and Amazon Studios."

This show seems to have been in the works for a couple of years despite details on the collaboration still being scarce outside of the fact that the show will, according to Jonathan Nolan and Lisa Joy, "bring this massive, subversive, and darkly funny universe to life." We don't yet know if this show will be a linear narrative like Westworld or incorporate audience choices like Bandersnatch or Minecraft: Story Mode on Netflix, but the latter is an interesting possibility to think about.

Being based on a choice-heavy RPG, this show even has the potential to let the audience influence the narrative in impactful ways, though there has been no indication that this is happening yet. Still, if any of these upcoming TV shows based on games have the potential to blur mediums, it's one based on a game that puts an emphasis on the players' choices like Fallout.

The Fallout game series has been explored different parts of America years after the nuclear apocalypse destroyed an alt-reality version of the world not long after World War II, so I can't wait to see what part of the post-apocalyptic American landscape the show decides to tackle. This Fallout show is the latest in series of game TV show announcements. Within the past couple of months alone, we have gotten our first trailer for Netflix's Cuphead and confirmation of shows based on The Last of Us, Disco Elysium, Cyberpunk 2077, and My Friend Pedro.

The mediums of video games, television, and movies are finally colliding, and they all have great teams behind them. Even though the series is fairly divisive Joy and Nolan have shown they can create intriguing sci-fi narratives with Westworld. Meanwhile, The Last of Us is in good hands with the creator of Chernobyl.

Hopefully, Fallout gets an entertaining show that can help video game adaptations to other mediums to become more respected and unique in their own right.