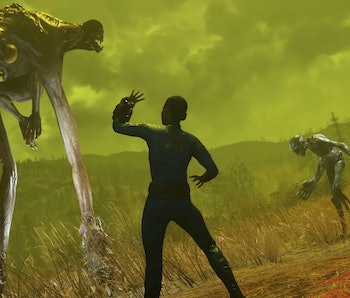 Bethesda released Fallout 76 in November 2018 to a chorus of criticism of the game's uninteresting story, barren world, ongoing technical problems and widely hated Fallout 1st subscription plan. Now, the Fallout 76: Wastelanders update adds highly requested features like NPCs and an in-depth dialogue system. The patch notes reveal a massive restructuring reminiscent of Final Fantasy XIV: A Realm Reborn. But will it be enough to lure back wary fans?

Within the excruciatingly detailed patch notes, a few clear changes show how Wastelanders is a massive overhaul to the flawed Fallout 76. The biggest update, and one that Bethesda has been very keen to highlight, is that NPCs are back. The absence of humanity in the game made Fallout 76 feel lifeless, but that issue has been mended at last.

The NPCs bring more narrative-focused content. A new main story is available for players above level 20, which introduces tons of new factions and highlights the game's new dialogue system. It gives players several choices in a similar fashion to Fallout 3, after Bethesda drifted away from that style of interaction with Fallout 4 and the base version of Fallout 76.

Wastelanders also adds new daily and weekly events, items, locations, lighting effects, and a lot of bug fixes and balance changes. But there is one major, obvious downside to this update: the file size. If you want to experience all of the new stuff Wastelanders brings to the table, you'll need to set aside about 70 GB. Combine that with the base game's large size, and you're talking about more than 110 GB of hard drive space.

All of this may be considered too little too late by those who have abandoned the game, especially after The Outer Worlds came along and stole Fallout 76's thunder. That said, Wastelanders does truly have the potential to save Fallout 76. It fixes the problems many players had with the game, delivering what we should have gotten in the first place.

So far, fans seem to be loving it too. "It really feels like old Fallout again," Crispy_Ashen_Onemsaid said on Reddit. Other posts highlight how the expansion "is everything I wanted" and "seems to integrate into the base game seamlessly." A passionate community has stuck by Fallout 76 despite all its problems and controversies, and their patience seems to have paid off at last with Wastelanders.

While it will take a few days to fully discern what Wastelanders' impact will be on Fallout 76 and its community, the early signs are positive. The massive download size is the biggest downside in a time when ISPs are throttling download speeds, but the arrival of Wastelanders while we're all stuck inside may encourage players to take another look.

Fallout 76 is available on Steam, PS4, and Xbox One.