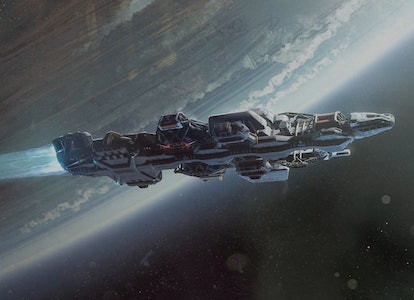 Microsoft delivered a pretty stellar showcase this year, and as you might expect, Starfield was one of the big focuses of the presentation, with over 10 minutes of new gameplay. It looks like a vast and wildly ambitious game, as expected, but Bethesda’s Todd Howard made an interesting promise near the end of the presentation. As the camera panned out, Howard talked about how you can land anywhere on any planet in the game, and there are over 1,000 unique planets in the game. That’s a bold promise but one that likely won’t end up as great as it sounds, as evidenced by Bethesda’s long history.

Starfield’s promise of over a thousand planets feels strikingly similar to the promise made with No Man’s Sky, a boundless universe to explore with countless things to discover. No Man’s Sky had a notoriously rough launch that failed to deliver on almost any of the promises made, even though it’s come a long way in the years since. Any RPG about exploring space should have a lot of diverse environments to explore, but it’s extremely hard to imagine 1000 different planets all having something unique and engaging.

Part of the reason behind this is Bethesda’s long history of overpromising and setting astronomically high expectations. Oblivion was a massive success for Bethesda and a game that helped redefine the open-world genre, meaning expectations were sky-high for Skyrim. In the lead-up to Skyrim’s release, Howard talked about how Skyrim had “infinite quests” and was “something you can play forever.”

On paper, this system (nicknamed Radiant) was supposed to procedurally generate quests that would be personalized to your playthrough. In practice, however, it ended up as an endless string of generic fetch quests used to simply wrack up experience and items. Sure, it’s nice to have some grinding options, but it’s not exactly the most compelling of content.

In 2018, Howard would make equally big promises with the reveal of Fallout 76. During that presentation, Howard talked about Fallout 76’s map was four times the size of Fallout 4, and even went further to talk about “all-new rendering, lighting and landscape technology” that supposedly has “16 times the detail” — enough to “view distant weather systems across the map.”

Of course, when the game was released, those “improvements” didn’t equate to better quality, just a vapid open world that felt empty and uninteresting. If you want another example, in the leadup to Fallout 4, Bethesda talked about how the game had more lines of dialogue than Fallout 3 and Skyrim combined.

If you couldn’t tell already, Bethesda continually likes to throw around big numbers and lofty goals when it’s revealing and promoting games. Time after time promises of being bigger hasn’t led to games being better. That’s exactly what’s so worrying about Starfield featuring “over 1000 planets.” The footage we’ve seen has shown a decent array of environments, from massive tech cities to dense forest planets. There’s no doubt that some of those planets, particularly the ones revolving around the story, will be interesting. Still, recent years have shown that smaller more deliberately designed worlds and levels are far superior to the open-world games that strive to have a million things to see and do.

The Outer Worlds is a perfect example of this as a game that condenses the Bethesda formula into a tightly focused story. While The Outer Worlds only has a handful of planets, each one feels different and dynamic because of the game’s strong writing and narrowed focus. Obsidian Entertainment wisely chose to focus on making its story and quests vibrant, and not padding it out with massive maps and hundreds of quests.

Bethesda certainly has the capacity to do the same, as the studio has proven it has the chops to make both well-written and well-designed quests. The real problem is all of the padding around that. A recent Kotaku report on the horrible crunch leading up to the release of Fallout 76 also raises even more questions. If Starfield really does have over 1,000 unique planets that can all be landed on, what kind of work and crunch has been, and still will be, required to get it to that point?

Starfield looks like it could be Bethesda’s most ambitious game yet, and that’s certainly exciting. However, lines like over 1,000 planets raise some serious red flags. Bethesda seems to be sticking to its old ways instead of learning new lessons.