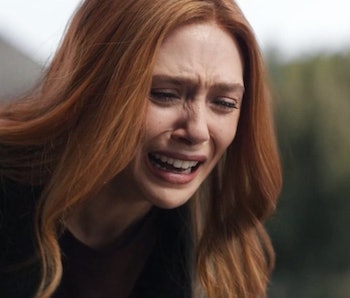 How long is this week's WandaVision? It's an ever-present question in the discourse surrounding the Marvel Cinematic Universe series, ever since it debuted on Disney+ in January.

The Elizabeth Olsen-starring drama has yet to release an episode longer than 50 minutes; what's more, all of the episodes up until this point have included the show’s frustratingly long end credits in their runtimes. As a result, viewers have held onto the hope that the upcoming WandaVision finale will run longer than any of the show’s previous episodes. Some Marvel fans have even speculated that the finale could cross the coveted 1-hour mark.

Unfortunately, it looks like that may not be the case.

The News — According to a recent Reddit post, the WandaVision Episode 9 runtime will be 50 minutes (including end credits). The user who posted the runtime appears to no longer have a Reddit account, but a moderator of the MarvelStudiosSpoilers subreddit claims to have verified the leak with the user.

It’s also worth noting that the subreddit’s moderators verified 2 previous runtime leaks for WandaVision’s seventh and eighth episodes and both turned out to be correct, so there’s reason to believe there is some validity to this Episode 9 runtime leak.

Assuming this leak is correct, then it means that WandaVision Episode 9 will end up being the show’s longest installment. However, it also means that no episode of WandaVision will go longer than an hour, surely a disappointing development for some fans of the series.

There’s also no telling how much of the episode’s runtime will be dedicated to its end credits. The credits in WandaVision’s most recent episode ran for about 8 minutes, including the episode’s brief but game-changing mid-credits scene. It seems highly likely that WandaVision Episode 9 will have at least one mid-credits scene of its own (if not more), so there’s potential for the episode’s end credits sequence to run for 8 minutes as well, or possibly longer. If so, then the actual runtime of the WandaVision finale could clock in closer to 40 minutes.

Given just how many loose ends the WandaVision finale still has to tie up (what does Agatha want with Wanda? What will happen with White Vision? Who’s the show’s surprise actor? etc.), 50 minutes definitely doesn’t seem like enough time to truly answer all of the show’s remaining questions. Then again, it wouldn’t be the first time the WandaVision writers have surprised us.

The Inverse Analysis — As always, it’s impossible to know if this WandaVision runtime leak is correct until Episode 9 finally premieres this coming Friday. If it is accurate, it’ll be interesting to see just how many answers the WandaVision finale gives viewers.

It’s hard to imagine WandaVision can truly resolve every one of its still-hanging plot threads and character questions in under an hour, but it's also possible that's not the goal of the show's writers. The series is, after all, setting up the events of Doctor Strange 2, so it's entirely possible some WandaVision questions won't be answered until that film.

But no matter what, WandaVision viewers may want to start preparing themselves for a finale that could be much shorter than they were expecting.