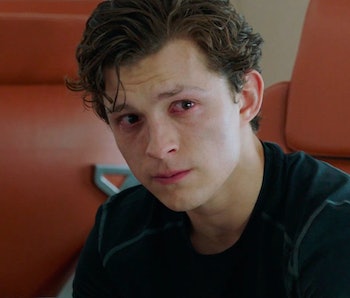 Where will Tom Holland’s Peter Parker go after Spider-Man: No Way Home? That question is one of several on the minds of Marvel fans everywhere heading into the film’s release this coming December — and it’s not hard to see why.

Several people involved in No Way Home, including Tom Holland, have called the film the final installment in the film trilogy that began with 2017’s Spider-Man: Homecoming. On their own, those comments are enough to warrant speculation about the future of Holland’s Peter Parker in the Marvel Cinematic Universe.

Now, some new comments from the film’s director only further reinforce the possibility that No Way Home will be the last of Marvel and Sony’s Tom Holland-led Spider-Man movies.

Watts’ remarks are in reference to how No Way Home is bringing together more characters on-screen than any other live-action Spider-Man film has before it. Indeed, with characters like Alfred Molina’s Doc Ock (and others) set to appear in No Way Home, the film is shaping up to be one of the most ambitious standalone superhero films ever made.

But Watts’ suggestion that No Way Home is the Avengers: Endgame of the Spider-Man franchise also continues to paint it as the final chapter in Marvel and Sony’s current Spider-Man franchise. Or, at the very least, it certainly seems increasingly likely that it’ll be the last chapter for Tom Holland’s Peter Parker.

So Long, Peter Parker? In many ways, No Way Home doesn’t just feel like the culmination of the MCU’s Spider-Man movies, but of an era that began all the way back in 2002.

As a matter of fact, the film’s incorporation of characters and actors from all of Sony’s previous, live-action Spidey movies makes it feel like the eighth and final installment in a story that the studio has been telling for nearly 20 years. Thanks to the participation of actors like Tobey Maguire, Andrew Garfield, and Tom Holland, it's a story that has explored practically every side and shade of the Peter Parker character.

At least, the studio’s continued focus on the Peter Parker iteration of Spider-Man is the only thing that narratively and thematically binds Sony’s three Spider-Man franchises together. Therefore, Spider-Man: No Way Home being the culmination of all of those franchises’ stories suggests that the film may be the last time Sony and Marvel choose to put Peter Parker at the center of their Spider-Man movies.

In other words, Spider-Man: No Way Home may very well be the last Peter Parker-centric web-slinger film we get for a while. Instead, as many fans have already speculated, Sony and Marvel may choose to begin making films about another version of Spider-Man from the comics — Miles Morales, for instance?

The Inverse Verdict — The success of 2018’s Spider-Man: Into the Spider-Verse proved once and for all that audiences were open to watching Spider-Man films that don’t exclusively follow Peter Parker. Taking that into account, there’s no reason to believe that either Sony or Marvel are unwilling to shine a spotlight on Miles Morales, Gwen Stacy, Miguel O’Hara, or any of the other web-slingers who have taken on the Spider-Man mantle in the comics.

Whether or not Spider-Man: No Way Home marks the moment when the two studios decide to make that transition from focusing on Peter Parker to another comics web-slinger remains to be seen. But calling the film Spider-Man: Endgame certainly suggests that No Way Home will say goodbye to Tom Holland’s Peter Parker — one way or another.