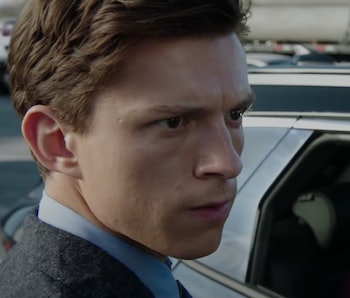 Spider-Man: No Way Home is shaping up to be a major event for comic-book fans.

The film, set to hit theaters later this year, will be the first time that a live-action Spider-Man project has attempted to bring a Spider-Verse-esque story to life on the big screen — with cast members from all of Sony’s past Spidey films appearing.

That includes Andrew Garfield and Tobey Maguire, both heavily rumored to be playing their versions of Peter Parker/Spider-Man in the film alongside Tom Holland’s prime-reality incarnation.

Of course, Maguire and Garfield’s involvement in No Way Home remains, for now, unconfirmed. That hasn’t stopped Marvel fans from continuing to theorize about multiple Spider-Men appearing in the film.

Some fans even think that No Way Home could introduce one beloved comic book hero into the Marvel Cinematic Universe.

A Long-Awaited Debut — Spider-Man: No Way Home is set to be the first MCU film to actually show fans and viewers the fracturing of the multiverse, with characters from other universes spilling over into its prime reality.

It’s through those same means that Andrew Garfield and Tobey Maguire’s Peter Parkers are said to appear in the film, but there’s no reason to believe they’ll be the only Spider-Men actually in No Way Home.

Miles Morales in the MCU — A few years ago, Miles Morales may not have been seen as a mainstream Marvel character by non-comic book readers, but that is no longer the case. Not only did Miles serve as the main character in the fantastic 2018 animated film, Spider-Man: Into the Spider-Verse, but he’s also emerged as the co-lead of Sony’s critically acclaimed Spider-Man video games.

And while Miles has yet to be seen in live-action form up to this point, we do know that he exists somewhere in the MCU right now, thanks to Spider-Man: Homecoming. That 2017 film featured a brief moment between Tom Holland’s Peter Parker and Donald Glover’s Aaron Davis, in which the latter character mentions that he has a nephew he wants to keep safe. In the comics, Davis is Miles’ canonical uncle, which means Miles is a part of the MCU.

Spider-Man: No Way Home could, meanwhile, serve as the perfect introductory vehicle for Miles in the MCU.

With the film set to feature all the past, live-action iterations of Spider-Man, No Way Home has the potential to serve as a fitting (if unexpected) tribute to the character’s big-screen legacy. Introducing a character like Miles Morales would, however, let No Way Home function as both a tribute to Spider-Man’s cinematic past and mark the first step towards one future a long time in the making.

Whether No Way Home pulls an already-superpowered Miles in from an alternate reality, or by simply has him be a normal kid who gets bitten by a radioactive spider, it doesn’t really matter. There are plenty of ways that the film could introduce Miles as the MCU’s newest web-slinger, which means the real mystery is whether it actually will.

Introducing another Spider-Man into the MCU would also, notably, allow a character like Tom Holland’s Peter Parker to cross over more into Sony’s other, ongoing superhero franchises without feeling like he’s being spread too thin. And make no mistake: having Holland’s Spider-Man appear in those films does very much seem to be on the minds of Sony executives right now.

The Inverse Analysis — Admittedly, there isn’t a lot of evidence to back up this theory.

None of the promotional materials that have been released for No Way Home up to this point have hinted that Miles will be appearing, and the film already boasts an impressively sprawling cast without him. But that doesn’t mean No Way Home won’t introduce him. After all, Marvel Studios does love to surprise.

It’s not like the studio isn’t doing a lot of work to introduce a new, younger generation of superheroes into the MCU right now either. With characters like Kate Bishop (Hailee Steinfeld), America Chavez (Xochitl Gomez), Yelena Belova (Florence Pugh), Riri Williams (Dominique Thorne), and Kamala Khan (Iman Vellani) all set to become major presences in the MCU over the coming years, space is opening up for someone like Miles Morales to join in the fun.

All we can hope is that Marvel and Sony feel similarly.