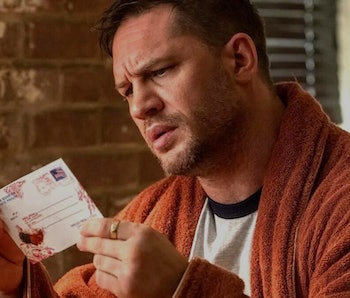 Plenty of excitement had already surrounded Sony’s Venom: Let There Be Carnage, but that anticipation just spiked through the roof.

The superhero sequel screened recently in London, and to say that social media has been on fire ever since would be an understatement, with ample speculation around some leaked plot details from the film, out next month.

Specifically, fans are losing their minds over the film’s post-credits scene. Early reactions have set it up as being one of the most shocking scenes comic-book fans have ever seen. As a result, its events leaked online pretty much immediately after the fan screening concluded.

And if these details are to be believed, Venom: Let There Be Carnage’s post-credits scene could be just as game-changing as some are saying.

Major Venom: Let There Be Carnage spoilers ahead.

In other words, the post-credits scene seems to confirm that Hardy’s Eddie Brock/Venom exists in the same universe as Marvel’s Holland-led Spider-Man films.

Venom in the MCU — At first, the line separating the Marvel Cinematic Universe and Sony’s growing on-screen Spider-Verse seemed inflexible.

However, that divide has been gradually blurring and becoming more ambiguous over the past year, thanks to a number of unexpected teases and comments by various Sony and Marvel execs. Then there’s the apparent appearance of Michael Keaton’s Adrian Toomes/Vulture from Spider-Man: Homecoming in the trailer for Morbius, which has led many fans to believe that the upcoming Sony film secretly takes place in the MCU.

This Venom: Let There Be Carnage post-credits scene, however, appears to permanently bridge Marvel and Sony’s cinematic universes. At the very least, it confirms that Sony’s Venom films do exist in the MCU.

It’s important to note that, in just a few short months, Spider-Man: No Way Home has been revealed to feature all of Sony’s past Spider-Man movie franchises crossing over with the current Tom Holland-led series. Therefore, there’s always the chance that Hardy’s Eddie Brock will end up in the same universe as Holland’s Peter Parker, as a result of the same multiversal shenanigans unfolding in No Way Home. That would make sense, at least, opening the door for No Way Home to retroactively place all of Sony’s past, present, and future Spider-Man films in the MCU.

Whether that’s what’s happening remains to be seen. After all, it’s possible that Hardy’s Eddie Brock has always existed in the MCU and we simply didn’t know it. As continuity reveals go, that’d be a fairly difficult one to swallow, but comic fans have been fed far worse in the past.

The Inverse Analysis — Right now, there’s no telling what exactly Venom: Let There Be Carnage’s post-credits scene means for the future of Sony’s current Venom and Spider-Man film franchises.

The scene itself is very intentionally included as a last-minute stinger to get fans excited about the future, which is an undeniably smart move on Sony’s part — even if it also raises some major questions amongst MCU and Spider-Man fans alike.

Regardless, this post-credits scene suggests that we could very well see Tom Hardy’s Eddie Brock and Tom Holland’s Peter Parker come to blows on the big screen. That’s worth getting excited about — no matter how it happens.

Venom: Let There Be Carnage is set to hit theaters on October 1, 2021.