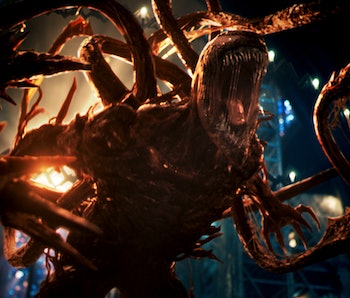 More symbiotes are on their way! Sony’s Venom movie was a massive unexpected worldwide box office hit, grossing more than $800 million despite no Spider-Man cameos or Marvel crossovers of any kind. As sequel always felt like a guarantee, and under director Andy Serkis, it’s become a reality.

Based on the Marvel Comics nemesis of Spider-Man, Venom tells the story of hard-hitting journalist Eddie Brock who becomes infected with a sentient alien ooze (a “symbiote”). The creature, called “Venom,” turns Eddie into a powerful superhuman capable of releasing weaponized black goo in a myriad of ways, but he can also devour actual people for sustenance. Based on the Venom post-credits scene, we know that the sequel involves the titular villain Carnage. But what else is to come for Eddie and Venom?

Here’s everything we know about Venom 2:

What is the title of Venom 2?

The Venom sequel is officially titled Venom: Let There Be Carnage. It comes from a quote said by Cletus Jones in his debut appearance in Venom, hinting at the titular symbiote inside of him. However, the title did not come without consternation. Many fans mocked the title, wondering why the movie instead didn’t go with Maximum Carnage to honor the comic book storyline.

What is the Venom 2 release date?

Venom: Let There Be Carnage will be released in theaters on September 24, 2021. The film was initially set to come out in October 2020, just about two years after the first movie's release. But the coronavirus pandemic halted plans across Hollywood. The sequel was initially pushed back to June 2021 before being delayed further to September.

Naturally, Tom Hardy will be returning as Eddie Brock/Venom. Also coming back are Michelle Williams (Anne Weying) and Reid Scott (Dan Lewis). Given the title, it’s no surprise that Woody Harrelson will have a large role to play as Cletus Kasady/Carnage.

The newest big character for the film is in the form of Shriek, Kasady’s love interest. Played by Naomie Harris, director Andy Serkis says she’s a damaged soul living in isolation. Additionally, Stephen Graham will debut as Mulligan, a detective who is hoping to use Brock’s symbiotic connection to find the remains of Kasady’s victims.

What’s the plot of Venom 2?

Venom: Let There Be Carnage will take place over a year after the previous film's events. Eddie Brock is still trying to get adjusted to life with the symbiote Venom, with mixed results. He attempts to compensate by leaning into his journalism career, scoring an interview with serial killer Cletus Kasady. And Kasady has his own symbiotic history after a failed execution makes him host to “Carnage.” And when he breaks out of prison, it’s up to Brock and Venom to take him down.

Who’s involved with the production of Venom 2?

In January 2019, Variety reported that Sony locked in Kelly Marcel (one of three writers on Venom) to pen the sequel. The same article revealed that director Ruben Fleischer might not return because he’ll be busy working on Zombieland 2.

Shortly after San Diego Comic-Con 2019, The Hollywood Reporter reported that actor Andy Serkis met with Sony to potentially direct Venom 2, and by August, it was confirmed.

A pioneering motion capture performer, Serkis won recognition for his Gollum in Peter Jackson’s Lord of the Rings trilogy between 2002 and 2004 and again for The Hobbit films a decade later. He furthered his resumé as Caesar in the rebooted Planet of the Apes films from 2011 to 2017. His incomparable experience with CGI fits exceedingly well with the effects-heavy nature of Venom 2.

In addition to acting, Serkis became a director in 2017 with his feature debut, Breathe. His second film, Mowgli: Legend of the Jungle, was produced by Warner Bros. and released on Netflix. It earned mixed reviews under the shadow of Disney’s own take on the same mythology in 2016’s The Jungle Book.

Could Spider-Man appear in Venom 2?

When Sony and Disney announced Spider-Man’s departure from the Marvel Cinematic Universe in August 2019, it seemed that much more likely that Spidey might swing into the Venom sequel. But now that the relationship has been mended and Spider-Man is an MCU hero in the Avengers once again, the fate of his appearance in the Venom sequel remains unclear.

Eddie Brock actor Tom Hardy did share a random image to his Instagram account in October 2019 of himself in a Spider-Man costume, which could just be a funny troll or a deliberate clue about Venom: Let There Be Carnage. He deleted it either way, for whatever that’s worth.

This at least implies that Spider-Man appearing could happen, but wouldn’t it be strange to see Tom Holland’s small Spider-Man face Tom Hardy’s hulking Venom? “Everyone involved would be very excited by a Spider-Man/Venom movie,” Pinkner also said. So it seems like this is everyone’s hope, but who knows if it’ll actually happen?

Will there be a third Venom film?

There’s already more Venom in the works! In August 2018, Tom Hardy confirmed he was contracted for a full Venom trilogy. So that means whenever Venom 3 comes (and what heroes and villains he comes with), Eddie Brock is here to stay.

Venom: Let There Be Carnage arrives in theaters on September 24, 2021.

More like this
Entertainment
Jan. 17, 2023
Guardians of the Galaxy 3's Adam Warlock reveal may be a big misdirect
By Eric Francisco
Entertainment
Jan. 15, 2023
3 ways Marvel Phase 5 can fix the MCU’s biggest problems
By Dais Johnston
Entertainment
Jan. 18, 2023
M3GAN 2.0 confirmed: Everything we know about the killer doll sequel
By Mónica Marie Zorrilla
LEARN SOMETHING NEW EVERY DAY.

This article was originally published on Oct. 25, 2019