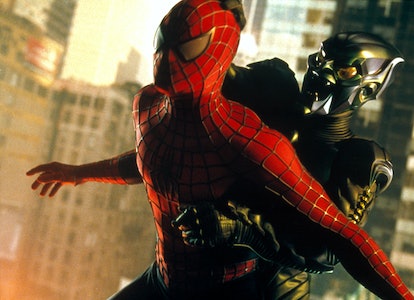 The Multiverse is full of madness, and one of its maddest inhabitants has a name: Norman Osborn.

While the Marvel Cinematic Universe is currently without the Green Goblin, the upcoming Spider-Man: No Way Home may soon have two Norman Osborns — at least, if the latest rumors on the Spider-Man movies are to be believed.

What Happened? — On April 17, known Marvel leaker Charles Murphy (of Murphy’s Multiverse) held a Twitter Q&A and answered several questions about the future of the MCU.

Twice, Murphy was asked about the character Norman Osborn, an evil billionaire who rides as the hideous “Green Goblin,” the most sinister villain in Spider-Man’s rogues gallery. Actor Willem Dafoe famously played the character in the 2002 smash-hit Spider-Man.

Osborn’s Homecoming — As a key villain in Spider-Man’s story, Marvel fans are understandably eager to see Norman Osborn appear in the MCU. But with the multiverse premise opening the door wide open for how Osborn can appear in the franchise, fans are wildly speculating whether Dafoe will reprise his role from the 2002 film. (Alfred Molina, who played “Doc Ock” in Spider-Man 2 in 2004, confirmed his return involvement in a recent interview.)

But Charles Murphy isn’t the only one talking about Osborn in the MCU. Another leaker, Nick Santos of That Hashtag Show, has also tweeted about Osborn in No Way Home, adding that Willem Dafoe’s version of the character is actually “the primary villain of No Way Home.”

“Just wait until you see his updated costume,” Santos tweeted on April 18.

So here’s the score so far: Willem Dafoe might return as the Green Goblin in Spider-Man: No Way Home. His role might be more than a cameo, but a full-fledged antagonist who ropes together several bad guys — possibly the Sinister Six — against Spider-Man. After No Way Home, Dafoe is not expected for more appearances in the MCU, and instead might be “replaced” by a different actor playing a different Osborn native to the MCU. (In the same way Tom Holland’s Peter Parker is native to this universe.) But Dafoe will at least have a sweet new costume.

Everyone got all that?

The Inverse Analysis — It’s hard to believe as the movie only wrapped shooting a month ago in March, but Spider-Man: No Way Home will open in theaters later this year on December 17, 2021. There is so much secrecy surrounding the project, but with a Christmas 2021 release date, it’s only a matter of time before fans know exactly what’s up with the next — and potentially final — Spider-Man movie in the Marvel Cinematic Universe. But fret not: Someone has to fight all these new Green Goblins in the universe.