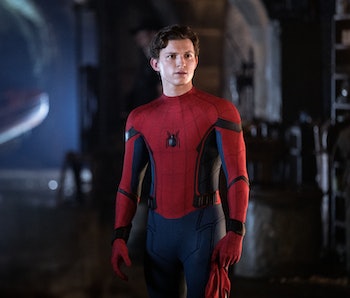 Things are coming up Peter Parker. After Sony and Marvel publicly butted heads after the theatrical release of Spider-Man: Far From Home, Spider-Man was confirmed to have at least one more jaunt in the Marvel Cinematic Universe franchise. And if the rumors are any indication, Spider-Man: No Way Home should be one for the ages for any Spidey fan. Here’s everything we know.

When will Spider-Man: No Way Home be released in theaters?

Spider-Man: No Way Home is currently scheduled to open in theaters on December 17, 2021.

The film was initially slated to release on July 16 of the same year. But the coronavirus pandemic shifted filming and release schedules for all MCU properties. And Spidey’s latest outing suddenly went from a summer blockbuster to a surprise holiday release.

What is the title of Spider-Man 3?

The third MCU Spidey film is titled Spider-Man: No Way Home. The title was revealed on February 24, 2021, after some fun had with the film's stars. The previous day, Tom Holland, Jacob Batalon, and Zendaya all released fake photos of titles for the movie, including Spider-Man: Phone Home, Spider-Man: Home-Wrecker, and Spider-Man: Home Slice. On the 24th, Marvel released a video of the three that poked fun at notorious spoiler Tom Holland not knowing the title, before making the final reveal.

Where can I watch the trailer for Spider-Man: No Way Home?

On August 23, after a long wait from fans and a controversial leak, the first trailer for Spider-Man: No Way Home officially released. You can check it out below:

What is the plot of Spider-Man: No Way Home?

Though Marvel Studios has yet to release a plot synopsis of Spider-Man: No Way Home, we can glean a lot based on the teaser trailer (above). The film will focus on Peter Parker contending with a world that has learned he is Spider-Man and thinks he is responsible for Mysterio’s death, as seen in the post-credits scene of Far From Home. Fed up with the status quo, he goes to new friend Dr. Strange, who casts a spell to have the world forget his superhero identity.

And of course, things go wrong, courtesy of the multiverse. As you’ll read below, several key cast members from previous Spider-Man films are set to appear in No Way Home. And we know that Loki recently introduced and opened up the idea of the multiverse. With a couple of sneak peeks in the trailer, the film will focus on Spidey trying to get things back to normal while contending with foes, and new friends,

What happened at the end of Far From Home?

As a refresher, here’s a brief recap at the end of Spider-Man: Far From Home.

At the end of Far From Home, Spider-Man (Tom Holland) defeats Mysterio (Jake Gyllenhaal) when the ex-Stark employee’s augmented reality illusions are seen through by Spider-Man. Mysterio is killed by a gunshot wound (accidentally self-inflicted when he missed Peter), who tells him with his dying breath, "People will believe anything."

Afterward, Peter returns home to New York and takes MJ (Zendaya) out on a date. But in the mid-credits scene, it is revealed that Mysterio had one more trick up his sleeve: Upon his death, Mysterio released doctored footage of Spider-Man killing him, making Mysterio a slain hero while Spider-Man is made to be a ruthless killer. The footage also blames Spider-Man for ordering the drones that terrorized London. All of this is spun with the manic hysteria only J. Jonah Jameson (J.K. Simmons in a cameo appearance) can do.

Finally, Mysterio reveals Peter Parker’s identity as Spider-Man. And before Peter can cuss out, “What the F—,” the film cuts to credits. Though Mysterio is dead and gone, the trickster has made Peter Parker’s life a living hell. Thus begins a new challenge for Spider-Man.

Who is starring in Spider-Man: No Way Home?

Naturally, Tom Holland will be returning as Peter Parker, and it will be the final film in the contract between Marvel and Sony for the Brit. Also set to return are Zendaya as MJ—who became Peter’s girlfriend in Far From Home—and Jacob Batalon as Peter’s best friend Ned Leeds (and lost over 100 pounds for the film). Additional returning actors are Marisa Tomei (Aunt May Parker), J.B. Smoove (teacher Julius Dell), Tony Revolori (Eugene “Flash” Thompson), Angourie Rice (Ned’s ex Betty Brant), and Hannibal Burress (gym teacher Coach Wilson).

But the big headline-makers have been what characters old and new will be appearing in Spider-Man: No Way Home. Stephen Strange will play a role in the movie, and it seems that the Sorcerer Supreme will take on a mentor role previously occupied by Iron Man and Nick Fury. This also helps feed the previously-stated multiverse theory, as he’ll be headlining Doctor Strange in the Multiverse of Madness as the next MCU movie following this one.

Fans went crazy back in October 2020, when it was reported that Jamie Foxx would appear in No Way Home, reprising his role as Electro from 2014’s The Amazing Spider-Man 2. And two months later, another Sinister Six member was announced to cameo, as Alfred Molina will be returning to the arms as Doctor Octopus. These are so far the only formally announced crossover characters. But this has stoked the rumor mills that fellow Peter Parkers Tobey Maguire and Andrew Garfield would be making some appearance. Indeed, if No Way Home will be the last standalone Spidey film in the MCU, using this as an homage to all Spider-Men past and present would be a great sendoff.

What else do we know about Spider-Man 3?

Marvel Studios President Kevin Feige told Fandango that the next film would be something that “has never been done before.” Feige’s full quote, after Fandango asked if the MCU will pick up the thread seen in the mid-credits scene, can be seen below:

“Much like the end of Iron Man, saying, okay, the rules have changed. Which now means we’re going to have to do something completely different next time. The how and the when and the specifics can change and evolve, but setting yourself up for something that has never been done before… at the end of Iron Man, it was a hero publicly outing himself so that in the next movies and all subsequent movies, we couldn’t fall back on the secret identity trope which had been part of Iron Man’s story for decades in the comics. And now people know Peter’s identity.

“People now think he’s a villain, Mysterio plays one last trick on him and succeeds… [so that] means everything’s different. Where it goes, we’ll see. But it’s exciting that it once again sets us up for a Peter Parker story that has never been done before on film.”