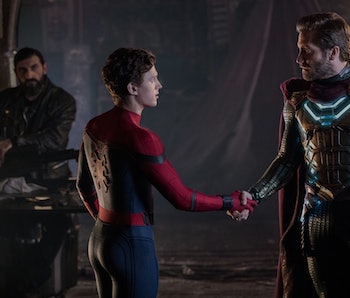 Over 20 films make up the Marvel Cinematic Universe but only a handful of villains are, by any definition of the word, iconic. David Tennant’s Kilgrave in the Netflix series Jessica Jones, Michael B. Jordan as Killmonger in Black Panther, Michael Keaton’s Vulture in Spider-Man: Homecoming, and Josh Brolin’s Thanos are among the elite few to actually make an impression. And while audience consensus has yet to be decided, Jake Gyllenhaal as “Mysterio” in Spider-Man: Far From Home is a strong new contender.

While the MCU has added a few wrinkles to Mysterio’s mythology, fans still knew better than to trust Mysterio, no matter what the trailers said. What fans couldn’t have anticipated is how much Mysterio’s goofy gimmick would actually resonate in 2019. As a trickster villain who can manipulate what people see, Mysterio is a showman villain for the 21st century in which misinformation and, yes, “fake news,” are weaponized to ka-pow Spider-Man.

Warning: Spoilers for Spider-Man: Far From Home ahead.

At the end of Spider-Man: Far From Home, Spider-Man (Tom Holland) thwarts Mysterio’s attacks on London, which were staged by Mysterio to supplant himself over Iron Man as the number one superhero in the world.

The whole time, Quentin Beck/Mysterio was fooling the world with elaborate augmented reality displays (carried out through hundreds of synchronized drones) that depict alien “Elementals.” The Elementals, the multiverse — it’s all bullshit, which has long been Mysterio’s M.O. in the comics.

In the comics, Mysterio was a special effects master who could create lifelike illusions to trick Spider-Man. But he’s not a Hollywood hack in the MCU. Instead, he’s a former subordinate of Tony Stark who invented B.A.R.F. (Binarily Augmented Retro-Framing), a device that scans the brain’s hippocampus to project one’s memories. Tony took credit for the technology (and renamed it B.A.R.F.) in 2016’s Captain America: Civil War.

Now in Far From Home, Mysterio uses B.A.R.F. to fool everyone. But the real twist of the knife comes later in the mid-credits scene when, after his death, Mysterio’s team leaks “footage” of Quentin blaming Spider-Man for the attacks on London and revealing his identity as Peter Parker. The video includes an altered recording of Spidey, who orders to “execute” a kill order. (In reality, Spidey was “executing” to “kill” the devices, not people.)

It doesn’t help that J. Jonah Jameson (J.K. Simmons in a cameo) of The Daily Bugle is there to support Mysterio (calling him a “galactic hero”) and condemn Spider-Man. One big change is that the Bugle has changed from a newspaper into an InfoWars-esque sandbox for Jameson to rail against vigilantes online, most especially the “menace” known as Spider-Man.

“People Will Believe Anything”

A line of dialogue that sums up Mysterio is spoken by Quentin himself. Moments away from his death, Quentin utters under labored breath, “People will believe anything.” People look for saviors, Quentin argues, and he found an opportunity to make himself one on the world’s stage.

A big theme with Mysterio is the manipulation of truth. Mysterio’s trump card is his maintenance over it, and what he lets people like Spider-Man and Nick Fury know about him. Even when his true motives are revealed, he still disorients Spider-Man with illusions. His final blow against Spider-Man is to doctor a digital video and share it online to frame Peter Parker for London. It’s doctored imagery, but it’s so believable J. Jonah Jameson takes it as fact. The sophistication of the technology as well as its surprising accessibility has already stirred paranoia that new AI software like deepfakes may one day cause irreparable harm in the political arena.

Mysterio is not a clear analogue for President Donald Trump. Ranging in everything from background to competence, the two differ in profound ways except their shared appetite for attention, which arguably qualifies them to be in the same league as sociopaths. What Mysterio represents in the Trump era, however, is people’s apparent vulnerability to showmanship over reality. Where Trump uses “fake news” as a shield, Mysterio aimed to use it as a sword.

Besides obvious points like overt racism and sexism that won Trump voters, you can read any of the dozen profiles of Trump’s base to see (here’s one more) how much the President’s bombast afforded him an audience. In a summary of several published papers, Psychology Today stated: “[Trump’s] showmanship and simple language clearly resonate with some at a visceral level.”

When the MCU Gets “Real”

The Marvel Cinematic Universe isn’t immune to evoking the real world into its stories of masked avengers. Its bite isn’t ever sharp, either.

Though big ideas are channeled in Marvel productions — such as surveillance in Captain America: The Winter Soldier, the agency of women in Jessica Jones, or the disenfranchisement of the working class in Spider-Man: Homecoming — the limits of the superhero genre means things are only really resolved when the good guy punches the bad guy hard enough.

This means there is a general lack of “a point” whenever Marvel tries to get “real” in its stories. Indeed, Spider-Man does “defeat” Mysterio with a hard right punch, and that’s where Mysterio’s story ends. (The effects of the mid-credits scene are yet to be revealed in a future Marvel movie.)

With Spider-Man: Far From Home, the threat of misinformation takes a backseat to Peter’s gawky efforts to woo MJ (Zendaya) on a trip to Europe. Honestly, it was probably too big of a burden to ask Peter Parker to handle. He’s just a kid.