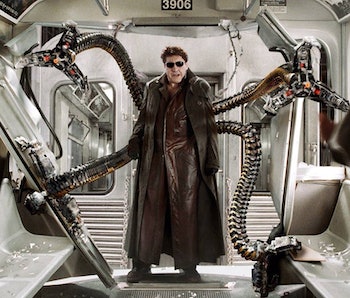 Spider-Man 3 is branching out. A movie about the Sinister Six, a team of supervillains consisting of Spider-Man’s most formidable foes, has been a tantalizing prospect for comic-book fans since days of Sam Raimi’s Spider-Man trilogy. The closest Sony Pictures ever got to making the film was in 2015, but the Marvel Cinematic Universe borrowed the web-slinging superhero and it threw the plans for the villain team-up out the window.

With Alfred Molina reprising his role as Doctor Octopus in Spider-Man 3, the potential for a Sinister Six movie is back on the table. The MCU film could utilize an epic comics storyline that would see Doc Ock at odds with the Sinister Six and the web-shooting hero. Let’s break it down.

In the comics, Doc Ock is the leader of the Sinister Six — a group that has included various villains, but most famously consists of Vulture, Electro, Mysterio, Sandman and Kraven the Hunter. Except for Kraven the Hunter, the remaining characters have already appeared throughout all seven Spider-Man movies.

Beginning in 1990’s Amazing Spider-Man #334, the Sinister Six were reunited by Doc Ock to take over the world (as villains are often wont to do). However, the tentacled antagonist never intended to share the responsibilities of global domination — which included a deadly toxin and a cure that Ock intended to sell to the rich — and betrayed the rest of the team. Angry with Doc Ock’s selfish endeavors, Sandman works with Spider-Man to defeat him and the rest of the Sinister Six. It sounds like the end of the story, but this is where things get interesting.

The double betrayal leads the remaining members to take revenge on Doc Ock in 1992’s Spider-Man #18-23, but they’re no match for the diabolical foe and he swiftly defeats them all (including Sandman). Electro, Vulture, Mysterio, and Hobgoblin (who replaced Kraven following his death) later decide to rejoin their two-timing leader in a bid to escape imprisonment. Together they stir up some chaos, stealing powerful weapons and technology from HYDRA. To stop them, Spider-Man recruits his own team of superheroes to aid in stopping the Sinister Six for good.

If Spider-Man 3 were to go this route, it would probably tweak several aspects of the comics storyline. Doc Ock could still create the Sinister Six, but the villains could be from different realities. This would keep in line with the multiverse concept that the film seems to be going for while giving Doctor Octopus and Electro some meaty material. You don’t bring back Molina and Jamie Foxx as villains only to relegate them to a cameo appearance. Instead of world domination, however, Doc Ock might want to take over the multiverse. Including the brief revenge plot would make certainly throw a wrench in the plan.

According to Collider, Andrew Garfield and Kirsten Dunst are also set to reprise their roles as Peter Parker and Mary Jane Watson, respectively. It’s possible that Garfield’s Spider-Man will join Tom Holland’s iteration of the character to take down the Sinister Six. After all, if Spider-Man 3 is indeed entering the Spider-Verse, then it stands to reason that every version of the web-slinging hero will unite against the supervillain team.

The MCU is primed for the next big step and the best way to include Sony’s Spider-Man universe would be to introduce the Sinister Six once and for all.