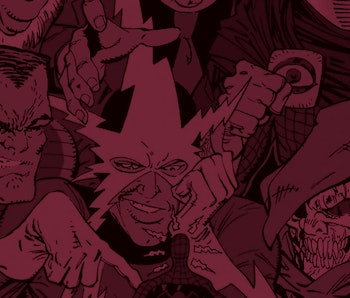 Next year in 2021, there will be five Marvel movies opening in theaters. FIVE. In addition to movies we already knew about, including Shang-Chi, Doctor Strange in the Multiverse of Madness, the third Spider-Man, and Thor: Love and Thunder, Sony has set a new date for October 2021 for an unknown, undisclosed Marvel movie.

So without so much as a title, let alone plot details or anything indicating confirmed characters, let's wildly speculate something that Sony has previously tried (and failed) to get going: A full-blown Sinister Six movie.

On Tuesday, Jeff Bock of Exhibitor Relations tweeted that Sony has set an untitled Marvel movie for October 8, 2021. That makes the second Sony/Marvel movie in 2021, and the fifth Marvel movie overall for the year. "Sony's web continues to grow," Bock tweeted.

Speculation for the movie is wide open, especially because we can rule out easy sequels like Spider-Man 3 and Venom 2 that already have confirmed release dates. The third Spider-Man movie in the seemingly fragile Marvel/Sony partnership is already set for July 16, 2021, while the sequel to 2018's Venom will open in theaters later this year on October 2. You can also rule out a sequel to the Oscar-winning animated film Spider-Man: Into the Spider-Verse. Spider-Verse 2 is set for April 2022.

That means October 2021 is open to a completely different angle into Sony's "Marvel Universe," itself a continuity in flux given the new connections to the "official" Marvel Cinematic Universe as teased in July's Morbius, starring Jared Leto.

Sony currently has a grip on the film rights to Spider-Man and his associated characters. That's how and why movies like Venom and Morbius exist at all — because those characters emerged in Spider-Man's comic books. It is also why Disney-owned Marvel continues to negotiate with Sony over access to Spider-Man himself for Marvel's popular Avengers film franchise. So whatever Sony has planned for 2021, you can bet it's a character originating in the Spider-Man family of comics.

Currently swirling in the internet rumor mill is a claim from known Marvel movie leaker @DanielRPK, who said in a tweet on Tuesday that the 2021 film may be a Spider-Woman movie. "Two months ago I heard they are developing a Spider-Woman movie so it's likely that one that is set for next year," they tweeted. "Maybe."

Spider-Woman, a character Stan Lee created to prevent competing publishers from beating them to the punch, debuted in her self-titled series Spider-Woman in April 1978. Unlike Peter Parker, Jessica Drew was not bit by a radioactive spider. Instead, she was born the daughter of a scientist from London. When Jessica falls ill due to uranium exposure, her father injects his daughter with irradiated spider blood and places her in an incubation, where she develops spider powers. Later in her history, Jessica Drew becomes an Avenger.

A Spider-Woman movie sounds neat, but what if the 2021 Sony/Marvel movie is something else? For years, Sony has been keen on producing a super-villain ensemble movie based on an alliance of Spider-Man's enemies, a group called the Sinister Six. Efforts began around 2013, with Sony hoping to build a universe out of its 2012 The Amazing Spider-Man reboot. Drew Goddard was announced as the director of Sinister Six in April 2014.

While Sony publicly touted Sinister Six even after The Amazing Spider-Man 2 failed to meet expectations, the studio eventually abandoned its efforts which led the arrangement struck with Marvel Studios in 2015. In September 2015, Drew Goddard revealed to Collider he was no longer working on Sinister Six.

But are the Sinister Six on the rise again? 2017's Spider-Man: Homecoming featured two of the original Sinister Six membes, Vulture (Michael Keaton) and Scorpion (Michael Mando). Spider-Man: Far From Home also introduced Jake Gyllenhaal as Mysterio, another prominent member; while the character was killed off at the end of the movie, his ability to create illusions is an easy way to write in his return.

Finally, the trailer for Morbius has Michael Keaton's Vulture appear in a yet-to-be revealed capacity. The trailer heavily suggests that Vulture "recruits" Morbius, adding him as a member of the Sinister Six. While Morbius never joined the Sinister Six in the comics, he did appear in the fourth season of the animated TV show Ultimate Spider-Man, which prominently centered around a major storyline involving the Sinister Six.

There are still other likely possibilities for July 2021. A Kraven movie is currently in development, while a proposed Black Cat/Silver Sable movie, titled Silver & Black was retooled into separate projects still in development.

But either way, Sony seems to be quietly building to an epic crossover of its own. How long before we finally get a Sinister Six release date, one way or another?

Morbius, the next movie in Sony's Marvel Universe, will open in theaters on July 31.

More like this
Entertainment
Jan. 26, 2023
Corey Stoll could have the chops to make a live-action M.O.D.O.K. work
By Mónica Marie Zorrilla
Entertainment
20 hours ago
Superman: Legacy Will Reinvent the Man of Steel — Everything to Know
By Eric Francisco
Entertainment
Jan. 25, 2023
The MCU could bring back a hero from its most underrated TV show
By Dais Johnston
LEARN SOMETHING NEW EVERY DAY.
Related Tags
Share: