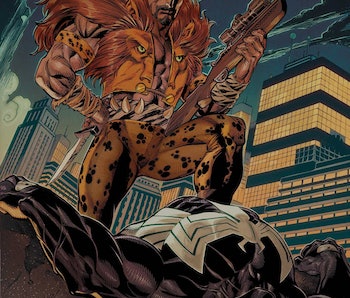 Filming for the next Spider-Man movie in the rocky Marvel Studios/Sony partnership is scheduled to begin this summer, and location suggests the arrival of Kraven the Hunter, at least according to popular online speculation. But if that’s true, what does it mean for Sony’s planned Kraven solo film?

On Friday, ComicBook.com’s Brandon Davis reported that the movie will shoot in Atlanta (Marvel’s preferred spot thanks to them juicy tax rebates), New York, Los Angeles, and… Iceland. That last one, Iceland, is speculated by Davis to be for scenes involving Kraven the Hunter, a Russian big game hunter who in the Spider-Man comics goes after the web-head as the biggest game of all.

On Twitter, Davis further cites Iceland’s (gorgeous) geography as the source of his guess at Kraven. Of all of Spider-Man’s known villains, Kraven is the only one to deal with such exotic wilderness locations. (Unless the script calls for the Green Goblin to be in hiding near a waterfall or something.)

Support for Kraven is further enforced by Spider-Man director Jon Watts, who told Uproxx in a 2019 interview that he’d want Kraven in another movie.

It’s all speculation, really, and Iceland is a common filming location. Aside from hosting its own film industry, the country was where movies like 2001’s Lara Croft: Tomb Raider, 2005’s Batman Begins, 2013’s Thor: The Dark World, and 2016’s Rogue One: A Star Wars Story were shot. In 2017, Inverse interviewed Dwayne Johnson’s stunt double who physically did the scene in The Fate of the Furious where Luke Hobbs directs the missile over ice.

But if Iceland actually hints at Kraven the Hunter, then what’s happened to Sony’s own plans for a Kraven the Hunter solo movie? In 2018, Collider reported that Richard Wenk, screenwriter of 2014’s The Equalizer and its 2018 sequel, The Equalizer 2, was attached to pen the script for a solo Kraven movie. Kraven was, and still maybe is, part of Sony’s ownership over the Spider-Man side of the Marvel Universe.

But little has been heard about Kraven since 2018. And, as of now, the lines separating Marvel Studios and Sony’s Spider-Man have never been blurrier. In 2019, it seemed like Marvel and Sony had broken up, with Tom Holland’s character seemingly out of the Marvel Cinematic Universe. and. Sony seemed confident in its independent success via Venom (worldwide box office: over $800 million) and the acclaim of Spider-Man: Into the Spider-Verse, which took home the Oscar for Best Animated Feature at the Academy Awards in 2019.

A month later, the two studios ended their dispute and Spider-Man returned to the MCU. More recently, the trailer for Sony’s Morbius confirms seems to confirm it takes place in the MCU’.s shared universe.

So, again: What’s up with Kraven? Is Sony still even pursuing his film? If so, will it share the same continuity as Venom and Morbius? Or has Sony killed Kraven (so to speak) and allowed him to become a villain for Spider-Man? All we know for sure is that even though fans have not met Kraven, wherever he ends up, it won’t be his last hunt.

Marvel and Sony’s third Spider-Man will release in theaters on July 16, 2021.