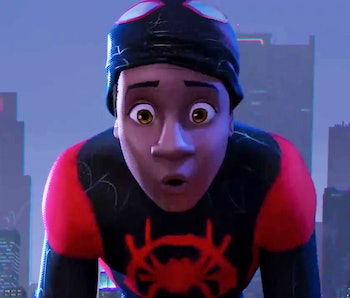 The multiverse is coming to the Marvel Cinematic Universe. We already knew the Doctor Strange sequel would be called Doctor Strange in the Multiverse of Madness, but it seems Marvel Studios has even more expansive plans for the reality-bending concept. Back in 2018, Sony’s Spider-Man: Into the Spider-Verse unleashed a multiverse consisting of several iterations of the web-slinging superhero. Now, recent leaks suggest the still-untitled Spider-Man 3 will follow in its footsteps.

Possible spoilers ahead for Spider-Man 3.

In October, Jamie Foxx announced his return as The Amazing Spider-Man 2 villain Electro by posting an image depicting three Spider-Men staring up at his characters face, peering out from an ominous expanse of stormclouds. The art was reminiscent of Into the Spider-Verse’s animation style and suggested Electro’s presence was emanating from what appeared to be a dimensional rift. Foxx’s caption also hinted his character would be much different this time around, which evidenced a doppelganger situation.

Foxx’s Instagram post was quickly deleted, but not before prompting speculation that the third Spidey film would explore the idea of alternate realities, which the series first teased during Far From Home with the introduction of J.K. Simmons’ J. Jonah Jameson (who appeared in Sam Raimi’s Spider-Man movies).

Marvel fandom YouTube channel The Cosmic Wonder recently shared a takedown notification from Sony Pictures, for its fan-made Spider-Man 3 multiverse teaser trailer. A Twitter user affiliated with the YouTube channel joked that the video had been removed for coming too close to the mark, saying "y'all just confirmed it was real." Clearly, that's an exaggeration, and the video may simply have been removed because it included copyrighted footage. However, YouTube is littered with similar content that has remained on the site, which suggests there may be something to those multiverse storyline theories after all.

Tom Holland’s Spider-Man has long been the underlying connector between the MCU and Sony’s shared universe. The character is in a unique space that is occupied by characters like the Avengers and non-MCU characters like Morbius and Venom. That Spider-Man 3 could draw from Into the Spider-Verse might mean that the MCU and Sony’s loosely connected universes will finally collide in a substantial way. Last year, the two studios had reached a new deal regarding the character that stipulated Holland's return for a third solo film. There's no better way to make it memorable than to bring in other web-slinging heroes.

For now, all things regarding Spider-Man 3 and its plot are being kept under wraps. However, it’s possible that the film will kick off a series of events that jumpstarts the multiverse ahead of Doctor Strange 2. It can’t be a coincidence that Stephen Strange is also involved in the film. If another Electro is showing up, that’s a dead giveaway that other versions of well-known characters could also appear. Either way, Spider-Man 3 could be the most important MCU film to date.

More like this
Entertainment
Jan. 26, 2023
Corey Stoll could have the chops to make a live-action M.O.D.O.K. work
By Mónica Marie Zorrilla
Entertainment
12 hours ago
Ant-Man's Memoir Is Real and Hints at Dark Quantumania Ending
By Eric Francisco
Entertainment
Jan. 25, 2023
The MCU could bring back a hero from its most underrated TV show
By Dais Johnston
LEARN SOMETHING NEW EVERY DAY.
Related Tags
Share: