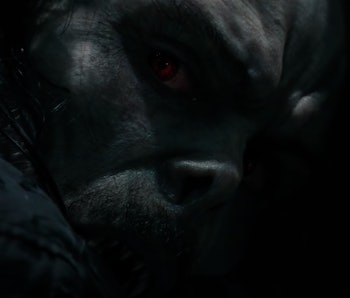 Another one of Spider-Man’s enemies is leaping live-action. The Marvel vampire Morbius the Living Vampire is getting his own movie in Morbius, starring Jared Leto. The next movie from the Marvel/Sony partnership that also spawned Venom and Spider-Man: Into the Spider-Verse, Morbius is the next dive into the Spider-Man archives in search of a new character with enough juice to lead a franchise.

But can Morbius walk in the sun, or is he doomed to dwell in the darkness of failed franchises?

Here's everything we know so far about Morbius, its comic book origins, and whether the living vampire will be a part of the Marvel Cinematic Universe. We mean this sincerely: The answer to that last part may surprise you.

When will Morbius be released in theaters?

Morbius was originally scheduled to be released on July 31, 2020 and was rescheduled for January 28, 2022, after movie theaters were shuttered due to the ongoing coronavirus pandemic. However, the movie is currently delayed again to April 1, 2022,

Where can I watch the trailer for Morbius?

The first and second trailers for Morbius can be watched in the embeds below.

Wait, who the heck is Morbius?

Morbius the Living Vampire is a supernatural, horror anti-hero in the Marvel Universe. Created by Roy Thomas and Gil Kane, Morbius was introduced as a villain of Spider-Man in The Amazing Spider-Man #101 in 1971. The character's cult popularity allowed him to star in his own series of Marvel comic books, and he appears as a recurring character throughout various Marvel stories.

A brilliant biochemist named Michael Morbius became a vampire when he tried a risky experiment to cure his rare blood disorder. Instead of healing himself, Morbius became afflicted with pseudo-vampirism, mimicking the creatures of vampire legend.

The tragedy of Morbius isn't that he's after power or wealth, but survival. Because he is forced to drink human blood to survive, he is thwarted by Spider-Man in a morally gray twist on the familiar black and white, good versus evil binary in superhero stories.

The popularity of Morbius stems from Marvel's dive into horror comics in the early 1970s. Just a little bit before the Satanic panic of the '80s, Marvel Comics introduced a slew of dark, edgy characters like Blade, Moon Knight, Man-Thing, Werewolf by Night, and Ghost Rider, as well as comic book series like The Tomb of Dracula and the anthology series Crypt of Shadows. In contrast to Marvel's usual superheroes, these horror comics were darker and sometimes aimed at an older audience (though kids still ate them up).

What is the plot of Morbius?

The plot of Morbius will reveal the character's origin story. In pursuit of a cure for his rare blood disease, Noble Prize-winner Michael Morbius undergoes an illegal experiment, which turns him into a supernatural creature of the night.

Who is starring in Morbius?

The cast of Morbius is packed with actors, all of whom will be familiar to sci-fi and fantasy fans.

Additionally, Michael Keaton will appear in the film. Some speculate he’ll be reprising his role as Adrian Toomes/Vulture from Spider-Man: Homecoming, but that has yet to be confirmed by Song.

Who is directing Morbius?

Morbius is directed by Daniel Espinosa, a Swedish-Chilean filmmaker. In 2010, Espinosa directed the crime thriller Easy Money, starring Joel Kinnaman. Espinosa also directed Denzel Washington in the 2012 movie Safe House, and Jake Gyllenhaal and Ryan Reynolds in the 2017 sci-fi horror movie Life, a movie the internet theorized to be a Venom prequel. (Spoilers: It wasn't.)

So, uhh, is Morbius the bad guy in his movie?

Yeah, we need to talk about that. In the comics, Morbius isn’t a villain eternally doomed to be bad. Yes, being an accidental vampire leaves Morbius prone to some bad behavior, but the guy has proven in the comics he’s capable of helping people, too.

This will undoubtedly factor into Morbius’s depiction onscreen, with his tendencies toward being a good guy amplified as he takes on his nemesis in the film, Loxias Crown.

Is Morbius part of the MCU?

For a long time, Marvel fans assumed Morbius would be very, very disconnected to the MCU in the same way that Venom wasn't considered canon to the Marvel Cinematic Universe. And then, the trailer for Morbius came out with a surprise cameo that shook fans everywhere.

In short, yes, it's part of the MCU, though it's not officially part of the Marvel "Phase Four" timeline. To read more about the film's surprising connection, read our explainer here.

Morbius will be released in theaters on April 1, 2022.